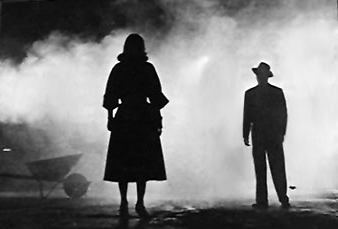 The only way I want to wake up in the morning is on my lumpy bed with the option of shooting the alarm clock with my thirty eight police special. Waking up with my head feeling like a jack hammer was at work and sitting in a chair with my arms tied behind my back is not my idea of fun.

I could barely remember how I got here. Oh yeah. I started this rainy day going to my office and getting a case to help out a gorgeous doll, Morna Lovelace, who claimed her boss was threatened with black mail or death to influence an important vote in the Senate. Then my eyes began to focus. Standing in front of me was two hundred plus pounds of ugly waving a card in front of my nose. The card I was given by Morna.

A gruff voice threatened, “How did you get in contact with this person? Did she come to you and blab some story which I must now straighten out before you die.”

“You must be new in this game,” I groaned. “If you are going to kill me anyway why tell you anything?”

He didn’t reply and then I noticed a clock on a table. I did some calculating and smiled. “Okay tough guy, I figure you have a minute or less before your time of fame is over. Maybe you better tell me who you are working for. Your comment about a Herr Soros, that mean anything?”

At that moment, as either a miracle or dumb Jax Hawkston luck would have it, the door smashed open and there was my old pal, Hot Shot Charley Dulaney of the DC police and a couple of his uniforms. The bully boy hassling me went to draw what must have been a gun when fire from the police stopped and dropped him. I commented, “Charley I have told you we lose good witnesses that way. Now he can’t tell us anything.”

As my ropes were cut by Dulaney he mumbled, “You need to use a tacking device to make it easy on DeDe.”

“DeDe is my tacking device. We have a system that works. I tell her where I am going and if she doesn’t hear from me within an hour she gets help. Luck of the draw for you today.”

As I stood up Dulaney repeated something I have heard from him before, “You don’t deserve that girl. Maybe you should marry her so she can make an honest man of you.”

“I’d still be in the minority in this town.” I then noticed Dulaney taking a card out of the newly deceased hand and I snatched it saying, “I need that. Relating to a caper I hear you could not handle and you sent this dame to me.”

“I didn’t put you on a case. I am only here because of DeDe. What are you working on?”

So Dulaney had not sent the client to me after all. Looking around the room I noted, “Ziggy is gone. Better put a trace on him.”

“He was cowering in the hall when we got here. Claimed he had nothing to do with what we would find. I’m booking him on false imprisonment and accessory to assault and battery. Fortunately I don’t have to hit him with a murder rap. Yours.”

“Let him off. I may need him in the future and you use him too. Gotta run because this is now personal I owe you one.”

I was not being unfriendly. I needed privacy to call DeDe as soon as possible. She was awaiting my call as I hurried down the hall.

“Hawk, another narrow one for you?”  The concern in her voice vibrated  through the phone.

“Very narrow sweetheart. I need you to hit the phone as we are going to follow the money. Contact our banking friends and find out if there is a Soros running anything through them to Switzerland.” I had a lot of banking friends as one of my jobs is advising banks about security. Some have said they owe me a lot, but unfortunately not money.

DeDe promised, “On it big guy.” I added, “While you are doing that I plan to visit our client.”

“The Senator being threatened?”

“No, the dame who came by. I don’t like being played for a sucker and I plan to wrap this up today. If I am correct we are looking at the big money guy George Soros.”

“That sounds dangerous. Bet it won’t be that easy.”

“Bet you a steak at The Palm tonight it will be.”

“I wind up buying no matter who wins.” She was right about that. I may have to marry that girl some day after all. If I’m not killed first by her parents.

No stop to the rain. Still miserable. I made a brief stop by the Senate office building where Morna Lovelace worked, but the building was likely closed due to the radical protestors surrounding it. Saturday and they expect anyone hears them. However the card had a hand written address, in Georgetown.

I knew Georgetown, beautiful old building each with a history and each very expensive. So this Morna had money. I was soon there and knocking at the door. She opened it slowly pulling around her a rose patterned dressing robe. “You have a report already?” she asked.

I stepped inside and took off my hat saying, “Level with me baby. The police never sent you to me. How did you latch on to me? How did some goon know to follow, get ahead of and give me a headache? Were you being watched when you came to me?”

At that moment my cell rang, it was DeDe and I stepped away from Morna who made her self too comfortable on a couch. Very pricey furniture even for Georgetown I thought as I listened to DeDe’s report, commenting, “I never doubt my nose and something smells. I am at the Lovelace place, Georgetown.”

“She can afford it. I had an easy trace. A George Soros is said to have accounts under different names and organizations. And a Morna Lovelace has been receiving regular payments from a law firm believed connected with him. Born in Hungary he was a Hitler youth. Hates America. Worth billions. Held in Swiss banks.”

“You are a wonder in getting info,” I commented. “Easy task,” she replied. “The bankers reminded me of what we have heard before about this creep on the net and from that PolitiChicks group.”

Morna had resumed standing and came to me as I hung up.

“This is not what you think.”

“It’s everything I think. First where did you hear about me?”

“The Senator has talked about you in the past. How you broke the case proving a group attacking the president’s press secreatry was paid by Antifa.”

“Well I know the senator was not threatened,” I informed her. “He is one tough Texan. What I guess is that you got a job on the staff and was expected by certain parties to turn him. If I know him at all, your sex appeal probably didn’t work for the first time in your life. And obviously you have made big money working for certain groups.”

She moved closer to me and gripped my arm with a hand. “They have been watching me due to my lack of success. That note was aimed atvme not the senator. They wanted me to do more.”

I stepped back and put my hat back on. “Tell you what I’m going to do for you and if you don’t listen I predict you’ll be joining the fishes in the Potomac!”

She gasped and I continued, “I’m going to call the most honest cop I know, Captain Dulaney and you will be protected. But you will be expected to make like a canary and sing. Then I can promise to witness and help you keep your hands clean. I believe in going after the bigger fish, so does Dulaney. You’re a tadpole and for now expendable unless you do what I say.”

Morna sat back down and nodded her head with a sob. I speed dialed Hotshot Charlie and knew he’d be here sensing a big score for his record. His turn to owe me.

Back outside after the squad cars arrived I missed two things, a cigarette which I had given up due to DeDe’s badgering and a good thick ribeye.

I called DeDe quickly. “Hey, I wrapped it up. Never doubt a noir kind of guy.”

“Hawk, are you alright?”

“Never better sweetheart, but too gloomy a day to work. Prepare to close the office for lunch and we’ll get that steak I won.

She laughed and I hung up looking at the water filled streets and thinking what a shame the rain could not clean this city.

DC is a tough place with some of the meanest streets in the nation. But with a president and a Texas senator fighting to make a difference, and Hot Shot Charlie Dulaney there was hope. With someone like DeDe living here there is a lot of hope. It dosn’t have to always be noir here.

Prager University: What is Net Neutrality?