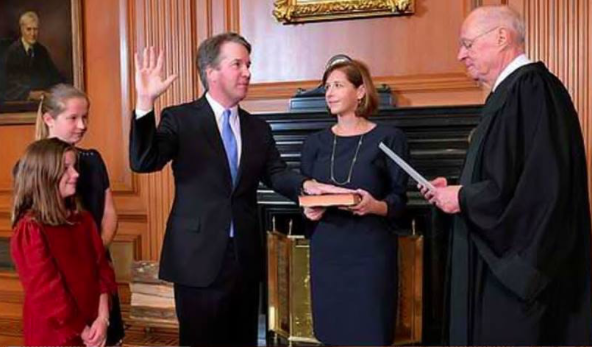 America came very close to having another institution destroyed during what should have been a simple process. What we witnessed coming out of Washington DC the past few weeks should cause every American to be concerned about the well being of our nation.
Ever since this nations Founding there has been an effort by those who hate our Republic, to destroy our Rule of Law and our Constitution.
Even though America has proved to be the most generous and prosperous nation in history, there are those who prefer to experiment with other forms of government that always fail, and that squash Freedom and Liberty.
Think about it, my fellow citizens. Two votes separated whether or not a Judge would become the 114th Supreme Court Associate Justice.
Have we taken living in America for granted?  Are we so selfish and blinded by prosperity that we are willing to allow a few bad people to destroy our American dream?
Are we willing to become a nation that abandons God, family, and everything that has made America a great nation?
America has seen a pattern of diminished expectations over the last few election cycles like never before in our history as a nation.
Many Americans refuse to accept personal responsibility, don’t want to work, and are willing to give up liberty for comfort.
Many Americans have lost site of how and why America became a nation.
As a result of our diminished attitude we have become complacent and have given up our Civic duty.
We have allowed those who we have elected to oversee our system of government to become our masters rather than our Representatives.
We have allowed illegal Immigration to become out of control. We will not secure our borders, and we don’t require people to assimilate into our culture anymore so that America can continue on its path to greatness as one people united.
Our Military and our Police Officers are disrespected, and corruption abounds all around us.
We don’t teach our children our Founding Principals and our education system has been hijacked by progressive educators.
We have come to a point in America where almost half of those who voted refuse to accept the results if their candidate loses.
What ever happened to unity and working things out for the good of our country?
We are all Americans, and what is good for our nation should be our first priority.
It’s time for us to face the fact that America is being systematically destroyed, and we must say enough is enough and work together to restore our Principals.
It is a privilege and an honor to be born in the USA, and I for one am proud to be an American.  Are you?
It’s time to get our act together and move forward.
It’s time to revisit the importance of seeking the pursuit of the American Dream.
It’s time to act like Americans once again.
It’s time to ask ourselves if we really want to throw all that America stands for away or are we willing to get back on track.
The choice is ours and time is running out to make a decision.
Share
Facebook Twitter Pinterest Reddit Share via Email Print

How Do Boys Learn to Be Good Men?