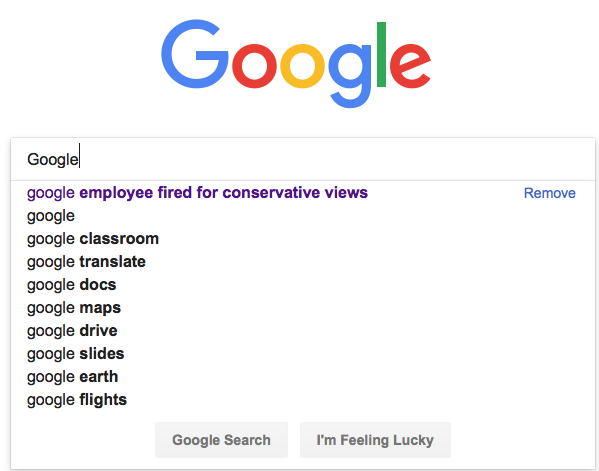 Google is throwing itself a hell of a 20th birthday party. And everyone is bringing the gifts.

Few meetings between Sessions and AGs well to the left, like California’s Xavier Becerra, would have gone as well as this, but big tech monopolies were already controversial on the left, now they’re also being unfriended by Republicans. There’s a growing consensus that they’re just too big and powerful.

Google’s August search market share in America stood at 84%. That means it defines the internet.

Its secretive algorithms determine what people see when they search. It can unilaterally redefine an issue, such as when it shifted the search results for “Jihad” away from counterterrorist sites to favor Islamist and pro-Islamist media sites. It shapes how political leaders, including President Trump, are seen, and manufactures an ongoing consensus by simply choosing one set of results over another.

(During the election, its search engine provided more positive results for Democrats than Republicans.)

Even as Google is trying to celebrate its anniversary, it’s under fire for automatically signing Gmail users into its Chrome browser (which is a key link in its chain of monopolies meant to lock users into its search engine). After the outcry, Google, as usual, offered a partial retreat.

The scandal is fairly typical of Google which runs on privacy violations and monopolistic abuses. Before Google was rigging search results for political reasons, it was rigging them to favor its products. Search for “mail” and the first result won’t be the post office, it won’t even be mail.com which actually predated Google by a few years, it will be Google’s own Gmail. And that’s how it always works.

Its monopolistic vision of the future is of an Internet of Things, a smart home run on Google with eternally watchful smart speakers in every room of your house, processing your questions through Google, and sending every conversation in your house back along its servers to be analyzed by machine learning to better target you with ads on your smart fridge. And then it really will be Google’s world.

America’s political and cultural elites already live in one world or the other. But despite the wide range of both companies, many Americans are unhappy with the power and control they wield over their lives.

And so the utopia in which Google is your home, your car, your clothes, your entertainment and your life, may never arrive. The company has more power, but also more enemies, than ever before.

Even as Google aspires to run the world, investing in a variety of moonshot businesses, from self-driving cars (Waymo) to delivering internet by balloon (Loon) through Alphabet, its mothership company, its core business, search, that delivers most of its revenue through ads, is stagnating. While Google dreams of answering your questions before you ask them using machine learning and voice search, it’s doing a terrible job of answering them when you do ask of them. Like all monopolies, its product is mediocre.

Google Search was retuned for mobile search by making every search trending. Search for “Supreme Court”, and Google will deluge you with Kavanaugh hysteria and assorted lefty media background pieces delegitimizing a “Republican” Supreme Court from FDR’s day to modern times.

Trending stories are friendlier to mobile users who have less time and patience for extended queries. It’s also simpler to deliver inaccurate results that fit the needs of the lowest common denominator user, who types in Supreme Court to see stories about Kavanaugh, than to deliver actual accurate results.

And Google is rigging search results to browbeat sites into orienting entirely toward mobile. Just as it will, before too long, dumb down search even further, to aid its voice search ambitions.

Turning search into a lowest common denominator exercise isn’t about serving users, but about securing Google’s hold on the future. And, in ways both great and petty (like forcibly logging users into its browser), it isn’t shy about herding its user products like sheep into its digital products.

Naked political bias was meant to cover Google’s silicon fundament from its greatest political threat. Republican administrations have offered little threat to the big tech companies. It was largely the left that was actively agitating for breaking them up or limiting their power. And Google focused on the left.

And then President Trump showed up.

The famous video of Google’s elites mourning Trump’s victory isn’t just political bias. As the firing of James Damore showed us, lefty political intolerance is baked into Google’s political culture. And anyone at Google who wanted Trump to win has to keep quiet and leak videos. But President Hillary Clinton would have also been really good for Google’s business interests.

Eric Schmidt, who once responded to Google privacy concerns by sneering, “If you have something that you don’t want anyone to know, maybe you shouldn’t be doing it in the first place”, was a close Hillary ally. His “Notes for a 2016 Democratic Campaign” sent to Hillary’s people proposed a $1.5 billion operation that would create “a single record for a voter that aggregates all that is known about them.”

Schmidt was applying the Google ethos to the Hillary Clinton campaign.

The unspoken back end of the pitch is that privacy violations can be harnessed for the good of powerful political interests. (The manufactured scandal over Cambridge Analytica’s Facebook scraping never touched the truly epic dot com privacy violators on the left.) Google’s vision of the end of privacy could be very good for President Hillary Clinton and the Democrats. So why regulate it?

That’s what Google elites were really mourning after Election Day.

They weren’t just crying because their lefty political movement lost, but because the vision of a Clinton-Google alliance running the country was lost.

President Trump has warned Google that it can’t expect to abuse its powers and avoid scrutiny. And the leading figures on the Democrat side are less promising for Google than Eric Schmidt’s pal.

Google was ranked as the single biggest employer of Bernie Sanders donors, and its search results were accused of favoring Sanders. As the Washington Post noted, “nine of his top 10 results were rated “very pro” in the analysis”. Google’s current top 10 for Trump, by contrast, includes a bonkers New York Mag conspiracy screed, “What If Trump Has Been a Russian Asset Since 1987?” (In 1988, Bernie Sanders was honeymooning in the USSR, but Google doesn’t think that’s worth including in Bernie’s top 10.)

And while Bernie Sanders has been relentlessly attacking Amazon, a major Google rival, he has been fairly silent about Google. Meanwhile the Washington Post, owned by Amazon’s boss, has been critical of Bernie. But that doesn’t make him a reliable or ideal ally in Google’s war for the future.

Meanwhile Google faces the threat of Trump. A conventional non-populist Republican would have posed little threat to Google’s business interests. Elites love Google because of its shiny technocracy. Schmidt’s pitch to Hillary’s people is seductive to many in the GOP, but alienating to Trump and alien to his insurgent campaign which relied on populist enthusiasm rather than Big Brother level manipulation.

And Trump’s impact on the GOP has shifted it away from the unthinking worship of multinationals.

Google’s vision of the future is multinational, multilateral, multicultural and multi-everything. It’s a borderless world in which we’re no longer defined by nations, but by platforms. Every individual is a terabyte profile swimming among the vast server farm zettabytes in Finland, Singapore, the Dalles in Oregon and Quilicura, Chile, to be run on Google products designed by hipsters the Bay Area and manufacturerd by slave labor in China.

That was Hillary’s vision. That’s not Trump’s vision.

Trump’s economic nationalism is antithetical to everything that Google and the big dot coms stand for. Their borderless world requires the dismantling of nations into united markets governed by global treaties. There’s no room for national interest if Google or Amazon are to run the world.

America isn’t just at war with a nebulous left, but with a leftist vision embraced by the big tech companies that have defined how we talk to each other, what we read and what we know.

Google isn’t just leftist by accident. It’s leftist by design. Its vision is globalist, its scope is endless and the only thing standing in its way, besides its rivals, is the nation-state. America.

The confrontation between Google and Trump encapsulates the clash between the national and the multi-national, workers in red states and elites in blue cities, tradition and technocracy, the individual and the machine. The struggle will decide whether the future belongs to the individual or to Google.

Still So Many Roads: Eight Essential Albums of Otis Rush