”May Allah send the message I am longing for,” Ashraf Walid Suleiman wrote on his Facebook page. 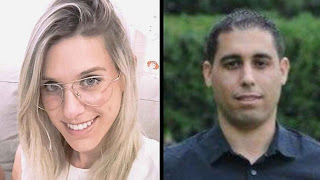 Then he went on to murder two Israelis, tying the hands of Kim Levengrond Yehezkel, a receptionist working toward her law degree, and the mother of a 16 month old baby, and Ziv Hajbi, the father of twin boys, before shooting them at close range.

A 58-year-old woman was left with a gunshot wound in the stomach after she burst in on the Islamic terrorist while he was busy doing Allah’s work.

That was the message from Allah that Ashraf, Hamas and the Palestinian Authority were looking for.

“The Palestinian people everywhere praise the heroic operation,” Hamas wrote, gloating over the heroism of tying up a 28-year-old receptionist before killing her. The Palestinian Authority will be paying a salary to Ashraf if he’s captured alive and will be making payments to his family if he’s killed.

At the United Nations, Mahmoud Abbas, the unelected leader of the Palestinian Authority, and the boss of Fatah and the PLO, which control the terrorist entity, called terrorists, “hero martyrs”.

“By Allah, even if we have only a penny left it will only be spent on the families of the Martyrs and the prisoners, and only afterwards will it be spent on the rest of the people,” Abbas had declared in July.

Two days later, Yotam Ovadia, heading home to prepare a romantic dinner for his wife, was stabbed to death.

“The heart breaks at the sound of your little son calling ‘Abba, Abba.’ (‘Daddy, Daddy’),” his father-in-law said at his funeral.

In September, it was Ari Fuld, an American father of four who moved to Israel, who was stabbed in the back outside a supermarket. Despite his wounds, he managed to chase down his killer, before dying. The family of the killer, Khalil Yusef Ali Jabarin, will receive a monthly salary from the PA.

These murders were paid for by the peace process. They were funded by the supporters of the two state solution. The solution that has solved nothing except how Islamic terrorist groups pay killers to murder fathers and mothers, sons and daughters, at a supermarket, at work or on the way home.

When the Democrats denounce President Trump’s pressure on the PLO, his cuts in foreign aid, his expulsion of the PLO office in Washington D.C., these are the crimes that they are supporting.

The two state solution isn’t peace. The PLO and Hamas have never been at peace with Israel. It’s two Rabbis murdered in January and February. It’s a receptionist wondering until the last moment whether she will make it home to her baby. It’s Hava Roizen, a Russian immigrant from the Soviet Union, who worked as a photographer, hit by a car. And it’s the terror victims of tomorrow. And the day after.

It’s the supporters of the two state solution whose hands are covered in the blood of its victims.

“I will bury him at the age of 35. What have I done wrong in my life? He’s leaving little children behind, 7-year-old twins, a 4 and a half-year-old boy. What is their mother supposed to tell them?” Ziv Hajbi’s mother demanded.

Tell them that American liberal Jews, love the left more than they love decency, morality or other Jews.

That’s why they continue to support the PLO.

A week after the murder of Ari Fuld, Dana Milbank at the Washington Post, wrote, “America’s Jews are watching Israel in horror”. He didn’t mean the horror of an American Jew being buried after a murder funded by their tax dollars. Nor did he mean horror at his own complicity in the crime.

Dana was horrified that Israel was defending itself to even the most limited degree from the killers.

He quoted his ‘Rabbi’, who according to Milbank “comes from Zionist royalty”, fulminating that, “the current government of Israel has turned its back on Zionism.” But by Zionism, Dana and his ‘Rabbi’ don’t mean the simple act of preserving Israel and the lives of people like Kim, Ziv, Ari and Yotam. Instead their idea of Zionism is a “negotiated peace” with the killers whose crimes are made possible by the illusion of negotiations. There has been a generation of negotiations and no end to Islamic terror.

Israel hasn’t turned its back on Zionism. The Jewish enablers of the PLO, of the terrorist killers, have. In an Orwellian twist, they have redefined Zionism to mean the destruction of Israel. Israel’s government, which fights for the Jewish State’s survival, is therefore anti-Zionist, while the lefties who want to destroy Israel are the true Zionists. Up is down. Left is right. And a generation of terror is peace.

“The current government in Israel has, like Esau, sold its birthright,” Milbank quotes his ‘Rabbi’.

Israel has not sold its birthright. Those American Jews who chose terrorists over Israel have.

They have sold out Israel for a chance to be at the next Women’s March, right behind its Farrakhan loving leaders. They sold Israel for an Obama speech, for a cocktail party and for fitting in on the left.

Esau sold his birthright in a moment of hunger. They sold theirs out of cowardice and treachery. They paid for it with lies. Their manicured hands are covered in the blood of Israeli terror victims.

And it still isn’t enough. They never stop shouting for more.

More money for the terrorists. More land for their terror bases. More terrorists freed from prison. And more dead bodies in the cemeteries. More fathers and mothers who never come home to their children.

What can Ziv’s wife tell their children? She can tell them that Dana Milbank, that his ‘Rabbi’, that J Street, that six hundred other useless organizations and six hundred thousand useless individuals, may not believe in G-d, Zionism or that Jews have the same right to defend themselves as any other people.

But they do believe in funding the terrorists who murdered Ziv. They believe in the two state solution, with two growing Islamic terrorist states shooting, bombing and rocketing their way across Israel.

Abbas and Ashraf swear by Allah. But it isn’t Allah, the figment of a murderous desert warlord’s vanity and greed, that took these lives. It’s the two state solution. It’s the blood money pouring into the PLO.

These murders were brought to you by the two state solution. The next ones will be too.

And those responsible for feeding the blood money into the murder machine will condemn Israel’s “ultranationalist”, “nationalist”, “apartheid” government. They will pound their pulpits, feign tears over Israel’s betrayal of democracy and human rights, and then warn that Israel is about to lose their support.

That would be the bipartisan pro-Israel consensus that turned over a sizable portion of Israel to Islamic terrorists, that has taken the side of the terrorists at every turn and that insists on financing the terrorists.

You’re not pro-Israel if you fund the murder of Israelis. You’re the very definition of anti-Israel.

If that’s a pro-Israel bipartisan consensus, bring on the partisan pro-Israel consensus. The one that doesn’t pay lip service with empty resolutions while funding the murder of Jews, but that ends America’s generation of support for the terrorists that took the lives of Kim, Ziv, Ari and all the others.

The Left's Torture of a Black American

Sharia and the United States: Why the Two Will Never Be Compatible