The official outfit of the #Resistance used to be a black mask or private parts hats. Lately it’s been the pseudo-Amish outfit of an oversized bonnet and long red dress from The Handmaid’s Tale. 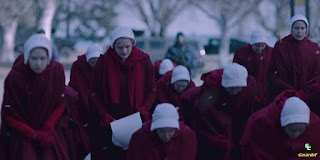 You can find lefty protesters dressed like Amish prison inmates protesting the Kavanaugh hearings by looking firmly at the ground. Alyssa Milano, a has-been child actress, brandished a “Never Kavanaugh, Never Gilead,” sign while dressed in the goofy signature outfit of the Hulu series. Lefties outfitted as, what the show’s costume designer has described as, “walking wombs”, protested Pence’s arrival.

The silly protest style has also been picked up by pro-abortion protesters in Ireland and Argentina.

The Handmaid’s Tale cosplay is, like so much of postmodern feminist outrage, a dystopian fantasy in search of a reality. Its imaginary universe, of the book and the show, in which men are innately predatory, validates their conviction that Brett Kavanaugh must be guilty, because he is a conservative white Christian man. And they’re all rapists. Just like the oppressors of Gilead in The Handmaid’s Tale.

The Handmaid’s Tale is to postmodern feminists what Birth of a Nation was to white nationalists. Both are fantasies by which the powerful justify their oppression by imagining themselves to be powerless.

Wealthy career women pretending that they’re slaves, staring at the ground as an aggressive protest, dressing up like nuns, the Amish or other members of religious communities that they despise, is a costuming that reveals the malicious hypocrisy of the lefty protesters, not of their conservative targets.

But The Handmaid’s Tale, a bad book, has always been tainted with pious hypocrisy and bad faith.

Margaret Atwood, its author, drew inspiration from the events of the Islamic Revolution in Iran, but she projected the treatment of women in Muslim countries on to “fundamentalist Christians” in America instead. The Hulu show picks up on the abuses inflicted by the Islamic State on women in Iraq and Syria, and once again projects the abuses of Islamic theocracies on to Trump, Republicans and Americans.

The Handmaid’s Tale appropriates the suffering of women in Muslim countries and uses it to nurture the inflated sense of victimhood of American feminists without ever acknowledging the source. Not only are American feminists appropriating their suffering, but they’re exploiting it for a political cause that is supportive of the Islamic theocracies that are repressing, imprisoning and killing those women.

Gilead, the imaginary dictatorship that oppresses women, really does exist in Iran and Saudi Arabia. It nearly came into being in Egypt and Tunisia because of the “Arab Spring” perpetrated by the Obama administration and backed by some of the same Washington D.C. career socialites who like to pretend that they’re oppressed Christian concubines on the weekends. The Offred cosplayers can be found at lefty conferences and protests alongside Muslim Brotherhood front group activists wearing hijabs.

But the hijab and the burka is, as every good lefty knows, empowering. As are genital mutilations and honor killings. Mohammed, who raped and enslaved women across the land, was a feminist. And every immigrant from a religion, whose texts prescribe beating women and whose laws legalize the rape of unaccompanied women, is another triumph for diversity, feminism and the right side of history.

The Islamic State’s mass enslavement of women, the forced gender apartheid of the Muslim world, the mass sexual assaults by Muslim migrants in Germany, the Muslim sex grooming gangs in the UK, all vanish to be replaced by safe American Christian male villains who validate the politics of the left.

The original feminists were Christians. Gilead, the caliphate of the Handmaid’s Tale, has no resemblance to any actual Christian society, but its system of concubines, of mandatory clothing for women, has obvious resemblances to Islamic theocracies. Including Iran: whose regime is backed by the left.

If the Handmaid’s Tale protesters were serious about women’s rights, they would be protesting John Kerry’s collusion with the Iranian regime, and Obama’s illegal shipments of billions to that regime, instead of pretending that Mike Pence, who won’t even be alone with a woman who isn’t his wife, wants to stock up on concubines from the ranks of the Washington D.C. chattering classes.

The Handmaid’s Tale takes a real threat to women and allows the political allies of that threat to instead project it elsewhere. That was the function of the book, and it’s the essential function of the Hulu series.

The Handmaid’s Tale, the Hulu show even more than the book, serves to advance modern feminism’s reductionism of women’s rights to abortion. The difference between abortion on demand at any time and any restriction on it is the difference between some European feminist nirvana like Sweden, (with several times the sexual assault rate of the United States), and the Tale’s Gilead.

This reductionism makes it easy to ignore the plight of women in the Muslim world. If the defining issue of women’s rights isn’t the right to own property, to walk the street or to not be beaten, but abortion, then wealthy white feminists are just as potentially oppressed as Iranian or Qatari women are. And when Muslim Brotherhood front groups sign on to the lefty united front, even when it includes abortion, that must mean that a repressive Islamic theocracy is actually more liberal than America.

When the core of women’s rights is abortion, then it’s easy to ignore the actual oppression of women.

The cheap costume theatrics of lefties in bonnets obscures the horrifying mutilation and abuse of women in the real world while allowing the powerful to feel good about their own hypocrisies.

When Margaret Atwood, the Handmaid’s Tale Canadian author, showed up at the prestigious Hay Festival in the UK, a group of women in red dresses and white bonnets followed her around.

There, Atwood suggested that Mike Pence could use her book as an “instruction manual” and that had Hillary Clinton won, they might have said, “look at what we have just avoided’.”

Hillary Clinton had laughed about her tactics in helping a 12-year-old girl’s rapist get away with his crime. And if there’s anyone who belongs in the hierarchy of Gilead, it’s Hillary, a greedy egomaniacal creature who covered for her husband’s abusive appetites for women by going after his victims.

But postmodern feminism is filled with such hypocrisies and absurdities.

While The Handmaid’s Tale has been touted as a work for the #MeToo era, Atwood ended up on the wrong side of the movement when she championed the cause of a male professor accused of sexual assault. “Am I a bad feminist?” Atwood demanded, in an essay which rejected the fundamental premise of #BelieveAllWomen by declaring, “that women are human beings, with the full range of saintly and demonic behaviours this entails, including criminal ones. They’re not angels, incapable of wrongdoing.”

But Atwood’s most famous work plugs into a poisonous postmodern feminist culture that uses fantasies of victimhood to demonize one gender and sanctify another. #BelieveAllWomen is the flip side of #YesAllMen. Evil is defined by identity. Kavanaugh is a man and a devil. His accuser, obviously an angel.

The lefty protesters have no religion, but they have a black and white view of the world, a Manichean clash between angels and devils, between Democrats and Republicans, feminism and masculinity. The political hysteria is redolent of Salem with witch trials, feverish purges and self-righteous terror.

Their mistake was believing that they could wear a costume to criticize someone else. Like a Rorschach inkblot, the costume you wear doesn’t say anything about other people, it says something about you.

The Handmaid’s Tale outfits are the costume of a fundamentalist political sect that stigmatizes and represses an entire gender and wants to remake America into a dystopian society where masculinity is a crime and kangaroo courts punish people with no evidence but the crime of their gender.

If you want to find Gilead, don’t read a book, visit a college campus.