The first episode of the Murphy Brown revival featured two guest stars, one who appeared on stage, Hillary Clinton, and one offstage, an old Clinton pal and accused sexual predator, Les Moonves. 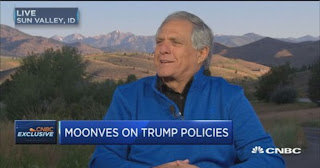 The only reason that the Murphy Brown revival, with its doddering cast creakily aiming cheap shots at Trump and fetid kisses at Clinton, exists is former CBS CEO and chairman, Les Moonves. It was a revival that no one asked for, but Moonves has allegedly never been shy about exposing himself to women, forcing them to perform oral sex on him, and spending CBS cash to prop up the Clintons.

“Les made it all happen,” Candice Bergen, who plays Murphy Brown, told the New York Times.

But then new revelations emerged about what the founding member of the “Commission on Sexual Harassment and Advancing Equality in the Workplace” had been doing to women for 20 years.

As reports emerged of Moonves’ abuse of women, the feminist heroine went on defending him.

“I think there should be some parameters. I think Les’s behavior was — it was a different time. He was a different man. Is it behavior unbecoming? Yeah. But I go back with CBS, with the first ‘Murphy.’ I have great respect for Les.”

“I would really hate to see Les go,” she said.

The “different time” included 1986, when a television executive alleged that Moonves told her he was going to drive her to lunch, but instead took her to a secluded area, “grabbed my head and he took it all the way down onto his penis and pushed his penis into my mouth.”

That’s what the man who made the iconic feminist show happen was really like. Like Harvey Weinstein and Meryl Streep, there was feminism out front and sexual assault in the back at CBS. And its feminist icons acted as shields for Moonves’ monstrous abuses lulling his victims into a false sense of security.

And CBS’ investment in the Clintons, one that cost countless untold millions, and its culture of sexual harassment and abuse, goes with him. Murphy Brown is his final Clinton legacy.

Like a negative vortex, the Murphy Brown revival only exists because Hillary Clinton lost an election.

“If Hillary Clinton was elected there’d be no artistic reason for this show to be on the air,” Steve Peterman, a producer on Murphy Brown, admitted.

Spite is not an “artistic” reason. But it’s good enough for the entertainment industry.

And it was good enough for CBS.

The Trump-bashing and Hillary-smooching came naturally to Moonves’ CBS. And the Murphy Brown revival was only the last of Moonves’ many Clinton projects.

In the fall of 2014, CBS began airing Madam Secretary, a series about a blonde female Secretary of State with a Hillaryesque hairdo who battles sexism and ponders political office. A few months later, Hillary announced that she was going to run.

That wasn’t the first time either.

In 1997, CBS aired A Child’s Wish. The made-for-television movie was a dubiously legal infomercial for Bill Clinton’s Family and Medical Leave Act. In the movie, the father of a girl dying of cancer visits Bill Clinton to lobby for the bill. A Child’s Wish was aired because Bill Clinton had lobbied Les Moonves.

Incidents like these made some joke that CBS had come to stand for the, ‘Clinton Broadcasting System’.

Hillary Clinton’s appearance on the Murphy Brown revival may be the final ghost of Moonves’ Clinton pandering. But it’s far from the most lucrative one. Before his exit, Moonves had also reportedly helped Bill Clinton’s The President is Missing earn a lucrative order from CBS’s Showtime.

Moonves and Bill Clinton were old buddies who golfed and skied together. And frequently mixed business with pleasure. When Clinton pals Harry Thomason and Linda Bloodworth-Thomason had a dispute with CBS, Bill Clinton reportedly intervened with Moonves. (The bad blood between Bloodworth and Moonves however lingered, with the former airing allegations against the latter.)

While the Murphy Brown revival has a #MeToo episode (in between taking shots at Trump), Candice Bergen finally disavowed Moonves every bit as awkwardly as Meryl Streep disavowed Harvey Weinstein.

Like Harvey Weinstein’s Hollywood, CBS is full of retroactive heroes, like Stephen Colbert, willing to condemn Les Moonves after his fall. But it was Les Moonves who made Colbert’s show happen. “I’m such a fan, personally. I love his show; I love his humor,” Moonves had gushed, touting Colbert as the “perfect succession for David Letterman and the perfect guy for CBS.”

Moonves’ CBS had spent big to give Colbert, Letterman’s old show as his platform. Letterman had come away with his own #MeToo scandal.

But that was just the culture at CBS.

By the time Les Moonves was finally forced out in a #MeToo scandal, CBS had completely shed its heartland past as a family friendly heartland television network. As he departed, it was a hollow machine full of snide sitcoms aimed squarely at urban millennials and soulless dramas at lefty boomers.

“There is a perception out there that we are ‘old media,’ that we are stuck in the old days of being the network of Edward R. Murrow and ‘Murder She Wrote,'” Moonves had sneered back in 2006. “When I took over CBS, Angela Lansbury was the sexiest woman we had on CBS. It’s gotten a little better since then, fortunately.”

Touched by an Angel predated Moonves’ tenure by a year, Christy by a year, Dr. Quinn Medicine Woman and Walker Texas Ranger by two. Post-1995, CBS’ drama orders began to look very different. The era of the heartland family show was over. In came the urban feminist procedural.

Today’s CBS is Moonves’ creature. Its programming, slick, cynical and hollow, is his legacy. Under Moonves, CBS became as family friendly, as dogmatically leftist, and as creepy as its boss.

And the number of #MeToo scandals that have hit prominent CBS personalities is unprecedented.

Jeff Fager, the former chairman of CBS News and the executive producer of 60 Minutes, was recently forced to resign over sexual harassment allegations. That and sending a text message allegedly warning a reporter, “There are people who lost their jobs trying to harm me.” (That hasn’t stopped 60 Minutes from using its latest episode to take more shots at Brett Kavanaugh.)

Charlie Rose, the co-anchor of CBS This Morning, also fell. Letterman survived his own #MeToo scandal, but has moved on from CBS to bore audiences in person. CBS is coping with a subpoena from the Manhattan DA’s office investigating Moonves. Like Harvey Weinstein, this interest is belated.

CBS and its corrupt culture will survive. Murphy Brown will be praised for its fake feminist posturing as a woman who defended a sexual predator will pretend to take on sexual harassment in the workplace.

But the fall of Moonves marks the end of another Clinton foothold on the entertainment industry. There will be no more Clinton shows, movies or appearances. The lights are out. The soundstages are empty.

The Clintons have left the CBS Black Rock building alongside their third favorite sexual predator.

Does The Constitution Literally Give Us The Right To Violently Protest?

Daniel Greenfield: The War on Columbus is a War on America