St. Andrew’s-Wesley United Church is, in its own words, an “affirming church” with “diverse” members and a “progressive” faith. The Vancouver church is also very focused on bringing refugees to Canada. 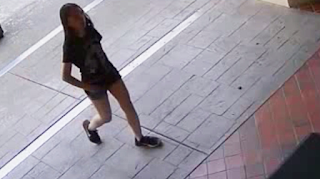 Despite being in Canada, when Trump won the election, Pastor Dan Chambers compared it to 9/11. In another post, quoting Yoda, he claimed that Americans are “fueled” by “fear of Muslims”.

But it isn’t Americans, or Caucasians, the targets of Chambers’ rant who are protesting these days. It’s the Asian immigrants protesting the murder of one of the daughters of their community by one of Pastor Dan’s Syrian refugees.

“I Wept, I Rise,” Chambers posted after Trump’s victory. But he never had anything to weep about. Those who knew Marrisa Shen do. And they are rising.

The protests at the Vancouver Provincial Criminal Court at the first appearance of Ibrahim Ali, Marrisa’s alleged killer, had already turned ugly with a Muslim woman in a hijab throwing coffee at a protestor.

In 2015, St. Andrew’s-Wesley had helped raise the money to bring Ali and his family to Canada.

The 30K/ 30Day project on Bowen Island through St. Andrews- Wesley set out to raise $30,000 to bring Syrian refugee families to Vancouver. They succeeded beyond their wildest expectations. The money they raised paid for Ali’s brother and his family to come to Canada.

And an extra $15,000 was raised to bring Ibrahim Ali and another brother.

“It would mean they could have a family reunion along with family that is in Burnaby,” was the pitch.

At 1 in the morning, last summer, the body of 13-year-old Marrisa Shen was found in Burnaby’s Central Park. The last sight of her was on the security camera of a Tim Horton’s. After over a year of searching, as her photo in a sailor suit looked out from the TV news, posters and flyers, after hundreds of interviews and tips, the case broke wide open.

St. Andrews- Wesley’s gift to Canada was arrested for her murder. That extra $15,000 had paid for a little girl’s life.

Even the worst crimes have a short shelf life. It takes a committed community to see justice done. Marrisa’s murder would never have been solved if Chinese-Canadians hadn’t attended rallies and protests, and kept the pressure on, and as Ibrahim Ali came to court, they were still out there, chanting, “No Bail” and “Where’s Trudeau”, a reference to Canada’s unpopular pro-refugee prime minister.

Banners reading, “Comprehensive Security Screening Now” and “No More Victims, No Bail” were brandished outside the courthouse.

Protesters insisted that Ibrahim Ali hadn’t been properly vetted. Not that vetting does any good.

Muslim migrants have been responsible for numerous assaults on women across Europe. Vetting for terror ties does absolutely nothing to evaluate how migrants from a culture where unaccompanied women and girls are considered fair game will react to being in Berlin, Manchester or Vancouver.

A member of the “social justice committee from the St. James Church” also showed up to claim that the Syrian refugees were “showing compassion to the girl and her family.”

Vancouver’s liberal churches had been very aggressive in sponsoring Syrian refugees. What they lacked in compassion for Canadians, they more than made up for in their love for Muslim migrants.

Pastor Dan Chamber is certainly not slowing down.

“The vetting situation is very good,” he insisted. “A situation like this gives one pause to review, and we’ll review, but it’s really out of an act of compassion and care that there is the response to the refugee situation, which is not going to stop, right?”

Not unless Canadian voters make it stop.

RCMP Supt. Donna Richardson insisted that, “by and large, our refugees that come to the country are hard-working citizens that are happy to be in Canada, and I would just hope that we look at this incident for what it is: It’s a one-off situation.”

90% of Syrian refugees are actually unemployed. Whatever they are working hard at, it doesn’t involve earning a living. Canadian schools are struggling with violent assaults by Syrian refugees.

Mohamad Rafia, a Syrian refugee beat his wife with a hockey stick for half an hour and then claimed that he didn’t know it was illegal. “More should have been done to educate him,” his interpreter insisted.

Perhaps with a hockey stick.

Before his arrest, Mohamad had been filmed and touted as all but an “advertisement for Canadian multiculturalism”. The chair of the group that sponsored Mohamad credited the Convention of Atlantic Baptist Churches as her inspiration. “We have made a difference to at least one family,” she insisted.

And ‘differences’ continue to be made.

When Soleiman Hajj Soleiman, a Syrian refugee, was accused of sexually assaulting six teenage girls at a water park, the River City Refugee Project, which brought him to the country, continued to support him.

Soleiman and the River City Refugee Project won, and the girls, ranging from 13 to 15 years old, were left in tears, when the charges against the Syrian refugee were dropped.

“I’m not really focused on what he’s accused of,” a refugee group spokesman insisted. “I want to show him that he has a community.”

He certainly does. It’s the girls who don’t.

“The church will co-operate with the police, and we are keeping everyone involved in this in mind, hearts and prayers,” Pastor Dan Chambers said of Marrisa Shen’s murder.

Mayor Murray Skeels of Bowen Island was even more explicit. “Our hearts go out to both the families, of the victim and of the accused.”

When you sympathize with both sides, you’re really only sympathizing with the perpetrators.

The Canadian women and girls targeted by Syrian refugees have no community. The community leaders, the political and civic authorities they trusted, are not on their side. They’re on the side of the abusers.

Marrisa Shen’s family is lucky enough to have a community. A community that puts her first. That community has been fighting for her for over a year. And that may be enough to get her justice.

Or it may not.

The Syrian refugee machine has the political, cultural and even much of the religious establishment on its side. Its victims have a few banners and their determination.

It’s not an even fight.

Why does the bleeding heart crowd, which overflows with empathy for every Syrian migrant cadging them for money, have so little empathy for abused and murdered Canadian girls?

One of the essential truths of religion is that what feels good isn’t necessarily good, not for you or for anyone else. The religious denominations hollowed out into social justice mockeries by the left are unable to fathom the most basic concept without which no meaningful system of values can exist.

Goodness isn’t to be found in your feelings, but in the pattern of your outcomes.

The refugee industry shrugs off every act of refugee violence, insisting that each one is a random event that does not speak to the rightness of the cause. That has always been the argument of the left. No matter how often its policies lead to tyranny and mass murder, the fault is in the stars, not in them.

“I know that nothing can’t be wrong, that feels so right,” Elvis once sang.

That’s the anthem of the left. And as another body lies at its feet, it keeps on singing the same old song. The road to hell begins with good intentions, with slogans about social justice, equality and the oppressed. It ends with mountains of corpses. Or just one small body lying after midnight in a park.

The Murder of Former Miss Baghdad