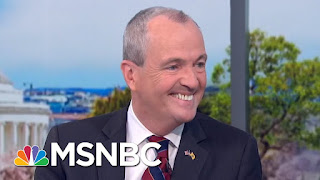 Murphy was running for governor of New Jersey against a Republican woman. And he had decided to fully back the Women’s March, a rally of radical leftists led by Farrakhan supporters, one of whom, Linda Sarsour, had been accused of covering up sexual abuse and harassment in her old workplace.

“Women aren’t afraid to fight back — and neither am I,” bragged the leftist Democrat. “I’ll fight to stop sexual harassment and assault.”

According to Katie Brennan’s account, the Murphy aide got into her home by claiming that he needed to use the bathroom. He then forced her down on a couch, partially undressed her, undressed, groped her and tried to rape her. Brennan fled into the bathroom, locked the door and called her husband.

She went to the police, was evaluated for sexual assault, and waited for prosecutors to do their job.

A recent Wall Street Journal expose revealed that top Murphy officials, including his chief of staff, were aware of the allegations against Alvarez. Murphy won the governor’s race and, according to his communications director, “Mr. Alvarez received an offer of employment in state government.”

Meanwhile the Murphy team was touting its feminist credentials.

“For the first time in New Jersey’s 242 years, the majority of a Governor’s Cabinet appointments are female,” Governor Murphy boasted. “While it has taken too long to get to this first, I am proud to stand with this diverse group of leaders, all of whom are committed to building a stronger, fairer New Jersey that works for everyone.”

Everyone except the women sexually assaulted by Murphy staffers.

Katie Brennan was offered $15,000 and a non-disclosure agreement. She had repeatedly contacted the campaign about Alvarez. In June, she directly emailed Phil and Tammy Murphy.

Earlier this year, Tammy, New Jersey’s new First Lady, had appeared at the Garden State’s edition of the Women’s March to discuss her own alleged sexual assault as a college student.

According to Tammy Murphy, her assailant had tried to undress her, much as Alvarez allegedly had, and tried to silence her by stuffing an apple in her mouth. “If there has been a silver lining in the past year, it is in the thousands upon thousands of women who have found their voices to fight back. We will no longer accept the actions of men who believe they hold power over us, or our bodies,” she tweeted.

Except that her husband’s administration not only accepted Alvarez’s actions, it went on paying him.

And after the Wall Street Journal expose, Tammy lent her name to her husband for a joint statement full of damage control legalese. “We are confident that this allegation was handled appropriately by the administration and that current policies and procedures were properly and promptly followed,” it said.

Tammy had gone from, “we will no longer accept” to “this allegation was handled appropriately.”

After Katie wrote to Governor Murphy, the New Jersey Dem responded with, “Hang in. We are on it.”

Almost half a year later, Katie grew tired of ‘hanging in’ and began talking to the media. Only then did Alvarez resign from his job as chief of staff of the New Jersey Schools Development Authority.

Murphy had accused President Trump of being a “historic threat to women everywhere”, and allegedly guilty of “sexual harassment and assault”, but it was the lefty Democrat pol with a walking smirk who was the one who had failed to take action against an accused rapist operating within his campaign and then his government. This potentially put women working for both his campaign and government at risk.

At September’s end, Governor Murphy threw a tantrum over the Kavanaugh hearings. He praised the “extraordinary courage” of Christine Blasey Ford for coming forward while ignoring one of his own people who had come forward with a clear and much more recent story of sexual assault.

“The presumption that you’re guilty as a woman who raises her hand and says something happened to me ought to have all of our hair on fire,” Governor Murphy ranted. “It angers me deeply.”

Murphy had known for a long time now about Alvarez, yet he hypocritically demanded that Kavanaugh, “ought to just pack up and leave town.”

The only reason Alvarez had to pack up is that the Wall Street Journal did what Murphy wouldn’t.

Alvarez’s case is the third time that one of Murphy’s aides embedded in New Jersey’s notoriously corrupt educratic complex got him into trouble.

Murphy had hired Marcellus Jackson, a former Passaic councilman convicted of attempted extortion and sentenced to 25 months in prison, to work for the Department of Education.

After admitting his guilt, Jackson had declared, “I shall return.” And return he did to a $70,000 job.

Governor Murphy tried to defend this grotesque abuse of power by playing the race card.

“It is invariably a person of color we’re talking about. This is New Jersey. It’s 2018. We have to get over ourselves,” he whined. “We have to get to a better place and give folks — Marcellus and generations to come — a second chance.”

The “person of color” in question was a corrupt politician who had taken bribes to steer contracts.

Murphy also claimed that the information that Jackson was a convicted criminal had failed to come up during the legal review, and only somehow came to light later.

All they had to do was use Google.

Stories about Jackson’s conviction had appeared in the New York Times, the Washington Post and countless local newspapers.

Then an aide was suspended for posting that the Trump administration consisted of “evangelical a—s”, and “molesters, liars, drunks, racists, heartless, bigots”.

Part of that rant seemed like a more accurate assessment of the Murphy administration.

Murphy, a smirking former Goldman Sachs executive, had picked up an ambassadorship to Germany, and had been named as the “largest personal giver to all federal candidates among nominees to date”. Personally backed by Obama, he had also served as the DNC’s finance committee chair.

Since seizing the governorship, the Murphy regime has ricocheted from one scandal to another.

Planned Parenthood had billed Murphy as “the candidate for women”. And Murphy had returned the favor by basing his claim that Trump posed a “historic threat to women” on Planned Parenthood.

It wasn’t the first time that Planned Parenthood had crawled into bed with dangerous politicians.

“New Jersey women need a governor who will stand strong to protect them,” the abortion group wheedled.

But Phil Murphy didn’t protect women. He allowed his Muslim and Latino outreach aide to continue working for him, on the campaign and in the government, despite a rape accusation.

The 16-year-old girl was stabbed to death by a Guatemalan illegal alien last month. Governor Murphy had declared, “We will stand up to this president. If need be, we will be a sanctuary not just city but state.” New Jersey became a sanctuary state. And a teenage girl lost her life. Others were raped.

Murphy accused Trump of representing a “historic threat to women”. There’s nothing historic about Murphy’s threat to women. It’s the same old threat of leftist politics which reduces the rights of women to the right to a speedy abortion after being raped by one of Murphy’s aides or one of his illegal aliens.

Morale at the Department of Education

Reminder: Let the Light of Jesus Shine this Halloween