From journalists Mary Fanning and Alan Jones of the CenterForSecurityPolicy.org: 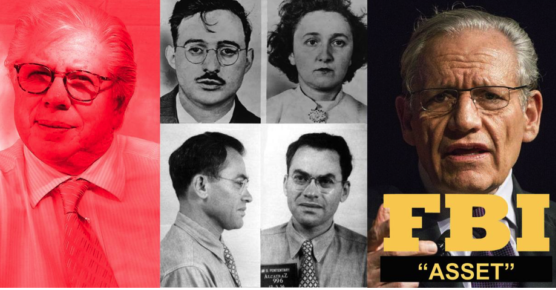 Imagine a replay of Watergate –only worse.

In both the original and the replay, the same Washington D.C. reporter, whose parents were Communist Party members connected to Soviet atomic spies and who were under FBI surveillance for decades, teamed up with the same second D.C. reporter, who was outed as an “FBI asset,” to take down a sitting Republican President of the United States.

In both instances the “unnamed source” leaking information to these two reporters turned out to be the Deputy Director of the FBI.

This is a remake.

Some of the players have even reprised their old roles.

We have seen this movie before.

This is stunning – decades apart in time two separate FBI Deputy Directors leaked information about the then-sitting President of the United States to a pair of reporters, one of whom hails from a family intertwined with the Soviet spy ring that handed America’s nuclear secrets to Joseph Stalin and the other of whom was an “FBI asset.”

Both of these FBI Deputy Directors had to know with whom they were dealing.

Mountains of FBI evidence and now-declassified files as well as archival newspaper reports leave little doubt that both of those FBI Deputy Directors would have known that one of the reporters to whom they were leaking was the son of Communist Party members connected to a Soviet spy ring.

Those Soviet spies were behind one of the worst Cold War espionage disasters in U.S. history. The information gleaned by Stalin from them permanently damaged U.S. nuclear security and military technical superiority and cost 94,000 U.S. troops their lives. Both of those FBI Deputy Directors would have also known that the second reporter to whom they were leaking was an “FBI asset.”

Both cases appear to be operations involving the highest levels of the FBI and operatives with troubling connections to the spy services of the Soviet Union (in the first case) and the Russian Federation.

The underlying alleged crime in the Watergate story was the President’s involvement in a cover-up of the break-in at DNC headquarters at the Watergate Complex.

In the current story the cover-up has been replaced with a “Russian Collusion” narrative and nebulous implications that the President is working with Russian intelligence services.

That evaporating Russia narrative is now being conflated with a new narrative that suggests that President Trump is a lunatic or had a “nervous breakdown.”

FBI Deputy Director Andrew McCabe knew days ahead of time that CNN planned to break a story that U.S. intelligence chiefs briefed President-Elect Trump about the now-discredited dossier. The CNN story written by Carl Bernstein and three other CNN reporters was published on January 10, 2017.

Newly revealed e-mails show that former Federal Bureau Investigation (FBI) deputy director Andrew McCabe was keenly aware of CNN’s internal understanding of a secret briefing about the infamous Steele dossier, days before CNN published any stories on the matter. The e-mails, which were obtained by Sen. Ron Johnson (R-Wisc.), also reveal that top officials used coded language to refer to the salacious and unverified allegations made by Steele.

Bruce Ohr testified that McCabe was among the FBI officials with whom “he discussed the anti-Trump dossier and had given some related research” the Washington Examiner reported.

These revelations put McCabe at the top of the production pipeline that manufactured the fake Trump Russia dossier. They also place McCabe squarely in the middle of the cabal’s conspiracy to break their dossier story via CNN reporter Bernstein.

Ultimately, Woodward and Bernstein hope to once again bring down a sitting Republican U.S. President. This is the same fate Richard Nixon met following the dynamic duo’s Watergate exposé. Woodward recently added to the narrative with the release of his anti-Trump book “Fear.”

Woodward conceded, however, that he could find no evidence of Trump collusion with Russia.

Woodward’s previous reporting was based upon a gaggle of anonymous sources. His accusations against President Trump and two upstanding generals in his administration, of sterling reputation, were met with derision and a chorus of “liar.” Woodward has now turned to innuendo of a Presidential “nervous breakdown.”

Woodward has come up with a new “story.”

Without providing evidence, Woodward makes veiled allusions that Trump is a Russian agent. Woodward asserts that the answer to the Trump Russia investigation lies in Moscow. Woodward claims that if he were to travel to Russia to uncover the “truth” about Trump “he would be killed.”

My word! One might think this is a display of Woodward’s own mental illness! Will we soon not be seeing the men in white coats carting away Bob Woodward for a “rest”? Not likely in the current left-leaning media environment.

Moreover, Mr. Woodward is further protected from attack by the liberal establishment and its media handmaidens. This is evidenced by a U.S. State Department emailfrom Hillary-fixer Sid Blumenthal that exposed Woodward as “an FBI asset” since his Watergate days. Jim Hoft of The Gateway Pundit discovered the 2012 State Department email that was released in 2015.

That is correct: according to Blumenthal’s email, Woodward was not only working with FBI Deputy Director Mark Felt (a.k.a. “Deep Throat” who more accurately should have been called “Deep State”) but was in fact a current “FBI asset” whose career depended upon that arrangement with the FBI. 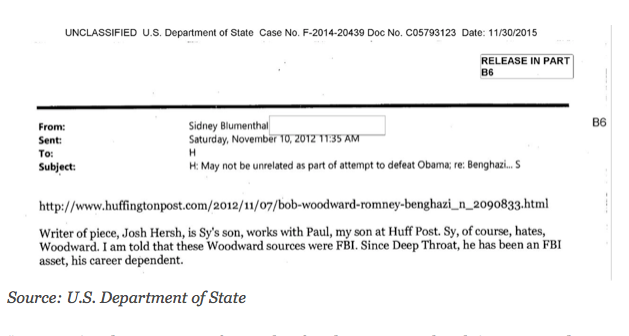 According to Texas A&M University’s Colodny Collection of Watergate materials:

Bob Woodward lied to conceal his early ties to General Alexander Haig. In 1969 and 1970, Navy Lt. Bob Woodward manned the Pentagon’s secret communications room, which transmitted messages around the world, including the back channel communications for Henry Kissinger and President Richard Nixon. In that duty, Woodward often delivered messages from the world’s top leaders to Gen. Alexander Haig, Kissinger’s deputy at the National Security Council.

The other half of the Watergate “dynamic duo” also had a history that would bring to mind questions regarding his motivations.

Read the rest of this powerful expose HERE: Center For Security Policy

Why A Detailed Biographical Movie About Obama Could Never Be Made

Why Jihad Targets Children and the Innocent