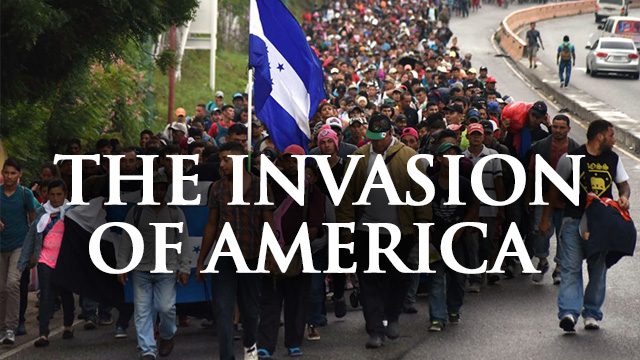 A massive “caravan” of South American migrants, originating in the impoverished nations of Honduras and Guatemala, has been on the march north towards the US. Despite a 1,500 mile journey ahead of them, these people are undertaking the long hike to the United States, where they plan to apply for “political asylum”: A notorious loophole in American immigration laws, since the typical response is to release the asylum seekers into the nation at large and ask them to attend a court hearing on a specific date. It’s an appointment less than 3% of applicants keep; the rest are apparently happy to become illegal immigrants in the US.

When this caravan of migrants reached the southern border of Mexico, the Mexican government – in an exhibition of supreme irony, considering their nation’s own immigration situation with America – responded by deploying police in full riot gear on a bridge spanning the Suchiate river, barring the massive horde of some 14,000 (reported by Sara Carter) people from entering the country. Little deterred, many of these people simply ignored the bridge and swam across the river, or else hired illegal ferrymen to row them over the water. They now continue north, still bound for American soil.

Reliably, President Trump’s reaction has been strong and resolute. He has referred to the incoming mass of illegal immigrants as nothing short of a “national emergency”, urged intervening nations along their route to stop them, and has warned that if the migrants reach the Mexican-US border, he may be forced to dispatch the military to protect our sovereign territory. And while it’s never a sure thing, this time many Republicans are actually supporting him, following his lead in making immigration in general – and this caravan in particular – a major issue in the upcoming midterms next month.

What is a sure thing, getting to be right up there with the daily sunrise, is that Democrats are howling. Naturally, President Trump should do nothing to repel this enormous, un-vetted mass of foreign nationals – many of whom are marching toward our border proudly flying the flags of the countries they are fleeing – from entering our country and essentially doing as they please. President Trump has speculated that the Democrats may even be hoping the migrants arrive before the election, so they can count on the new leftist votes. It’s a concern that’s not outside the realm of possibility, given this country’s disturbing tendency to not only tolerate but encourage the presence of illegal immigrants and their access to our nation’s systems and infrastructure. There is a conspiracy theory about Open Society, a billionaire orchestrating, planning and executing this caravan of immigrants storming the US border? Have these immigrants been bought and paid for similar to the “angry mob” demonstrations here in the U.S.?

What is most infuriating about this current crisis, of course, is that Democrats – and some Republicans, unfortunately – are the reason that the President may have to respond forcefully when the caravan arrives. Ever since Donald Trump announced his candidacy for President, he has called for the construction of a physical wall along the border with Mexico. It’s a project that has resonated with the American people, as demonstrated by the results of the 2016 election. People WANT that wall and law and order,  yet Trump alone remains the sole voice in Washington supporting it. Congress will not appropriate money for it, and has even gone so far as to include language in previous budgets designed to ensure that money they approved could not be used for the wall.

And now, when we really need it, it is too late. When that caravan arrives, we will have nothing to guard our border but the US Military, which the President may well have to deploy – and whose use could prove to be a disaster if things go badly.

I don’t even care about party affiliation right now. Every politician, be they a Democrat or Republican, who has refused to support the President in his attempts to build the wall, shares blame for our lack of preparedness as this caravan approaches, and for anything that may happen when it gets here. They have sown the wind by failing this country and Americans, and now, I fear we may all be about to reap the whirlwind.

Daniel Greenfield: Planned Parenthood Endorsed Him, Then He Bit a Woman