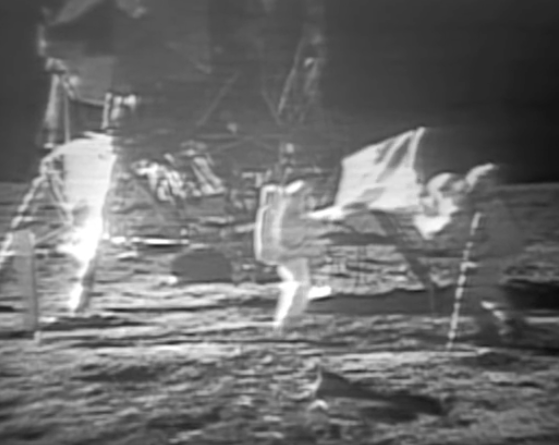 Just when it seemed that disrespect for the American flag couldn’t sink any lower, someone found a way…and in the process reinterpreted American history at the expense of a genuine American hero.

I had heard briefly that a movie about Neil Armstrong, First Man, had been made and had premiered at the Venice Film Festival. I was excited to hear that. I am a huge space buff, especially when it comes to NASA’s Mercury, Gemini, and Apollo programs. I have read many books on the subject and even have the official DVD’s covering each Apollo mission. I have been collecting astronaut autographs for years. My collection even includes a very rare Neil Armstrong autograph. Until his death, Armstrong’s autograph was the most valuable of any living person. To put it into historical perspective, the second most prized autograph amongst living persons was that of President Barack Obama. Setting aside politics, it can’t be denied that both men are key historical figures. The first human to set foot on the surface of another world and the first African-American President.

I have a co-worker who also collects astronaut autographs and I mentioned First Man to them. Their immediate response was a frown. I found this odd, especially given that Armstrong was not a controversial figure. My friend then proceeded to tell me that the film omits Armstrong planting the American flag on the moon. Apparently the filmmaker wanted to focus on the first Moon landing as a human/universal achievement as opposed to an American achievement. This blew my mind.

The director of First Man, Damien Chazelle explained his decision: “The flag being physically planted into the surface is one of several moments of the Apollo 11 lunar EVA that I chose not to focus upon.” His rationale was he would rather focus on Armstrong’s personal journey and the emotions he experienced as he made history. That is all well and good, but the whole point of the endeavor was a nationalistic one. The director’s choice to ignore the act of planting an American flag on the Moon would be akin to doing a biographical film about New England Patriot’s quarterback Tom Brady without mentioning the team he has led to 5 Super Bowl championships. Each player is an individual, but it’s a team sport. Winning the Super Bowl is the pinnacle of any NFL player’s career and no two guys are likely to share the same story but it would be nonsensical to do a biopic of Brady and depict him wearing some sort of generic uniform and helmet to obscure the team he plays for in an effort to focus solely on Brady’s perspective.

The American flag omission in First Man is infinitely more absurd than failure to mention the Patriots in a hypothetical Brady biopic. Football teams only have roughly 50 players and 15 coaches. Those are the individuals who could and would have a direct influence on winning a championship. However, an NFL franchise employs many persons in all kinds of roles aside from players and coaches. Without them, it wouldn’t be possible for the players and coaches to focus on winning. In reality it takes a lot of people to win a Super Bowl. Despite that, most of the attention is directed at the quarterback. They are typically the face of the entire effort and in all fairness it’s typically the ability and decision-making of the quarterback that is the difference between winning and losing, but they don’t exist in a bubble. If Tom Brady were surrounded by mediocrity and his team had a terrible defense, he couldn’t win it all by himself. Even when he does win he certainly doesn’t do it by himself.

The operation of a football team is nothing in comparison to NASA’s Apollo program. There were over 400,000 jobs associated with America’s Moon program. Landing on the Moon was and is arguably humankind’s greatest technological achievement. It was a massive undertaking and involved the best and brightest minds of the day constantly finding answers to things previously thought impossible. In less than 10 years the United States went from barely being able to launch a rocket to sending men to the Moon and back safely. What lit the fire? I’m unaware of any undertaking of such scale and scope that was accomplished so swiftly. Surely the motivation had to be massive.

It was a concept that is politically incorrect these days, but it had and has a name: American Pride. In a very literal sense, putting men on the Moon was the culmination of a competition between the United States and the Soviet Union. President John F. Kennedy got the ball rolling in his ‘We Choose to go the the Moon ‘speech at Rice University on September 12, 1962:

“There is no strife, no prejudice, no national conflict in outer space as yet. Its hazards are hostile to us all. Its conquest deserves the best of all mankind, and its opportunity for peaceful cooperation may never come again. But why, some say, the Moon? Why choose this as our goal? And they may well ask, why climb the highest mountain? Why, 35 years ago, fly the Atlantic? Why does Rice play Texas?

Kennedy inspired the American people that day. The words ‘our’ and ‘we’ did not refer to humanity in general, but America specifically. Wouldn’t it be nice if the American people could focus on what we can do again? Isn’t that the essence of the American spirit: competition? We weren’t going to let the Soviets beat us to the Moon. Period. We are constantly being told these days that such nationalistic fervor is wrong. Nonsense. No one reaches their full potential unless tested by an opponent who is just as motivated. Would Ali be considered ‘The Greatest’ without Frazier? Would we have called it ‘Miracle on Ice’ if we had beat anyone other than the Soviets?

The beauty of Kennedy’s vision is that it was direct competition with the Soviets but in a peaceful endeavor. It had zero to do with war. Rockets were adapted to carry men instead of weapons. Armstrong himself was a civilian at the time of the landing. It had nothing to do with militaristic superiority and we certainly didn’t claim the Moon as U.S. territory. Nevertheless, it was strictly an American accomplishment funded by American taxpayers at a cost of over $25 billion (in 1960’s dollars). Even more costly, it came at the loss of American lives…most notably Gus Grissom, Ed White, and Roger Chaffee.

The real tragedy of First Man’s attempt at political correctness is the movie’s subject: Neil A. Armstrong. Armstrong epitomized the things that make America great. He was a man who possessed extraordinary self-confidence and bravery. There can only be one first. Five other Apollo missions landed successfully on the Moon but Armstrong’s mission was the ultimate test flight. No one had ever landed on the Moon before…what would happen? The complexities of such an aviation feat are impossible to calculate. It required split second decisions with little time to spare. Armstrong had less than 10 seconds of fuel when he landed but he was as cool as ice. That doesn’t even consider the pressure he was under to succeed…something that likely weighed on his mind more than the peril of his own life. Everything was riding on it…from JFK’s mandate to American prestige. NASA landed 12 men on the Moon. All American.

Armstrong and his fellow astronauts risked their lives day in and day out. They all faced incredible pressure and their personal sacrifices were great. Neil Armstrong suffered personal tragedy as well, losing a two-year old daughter to illness, but he endured. The personal odyssey of Neil Armstrong’s journey to the Moon should absolutely be examined. He deserves tremendous credit for the dignified way he handled himself and the way he protected and preserved the dignity of this country’s greatest adventure. His personal story should be told without controversy and without removing the context of his finest moment.

The mission was an American journey. Don’t take the flag from the flag bearer.