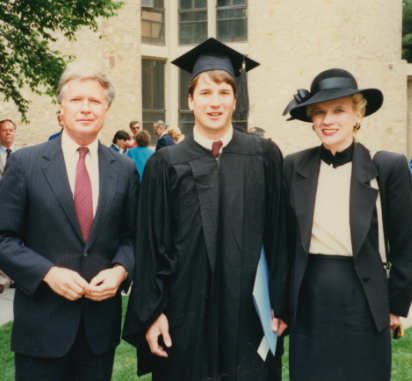 Hugh Hewitt’s Show Monday morning was full of discussion about the latest in the saga of Democrat hysteria and their inability to find a credible accuser to kill the Kavanaugh nomination to the Supreme Court.

It seems that an article appearing in The New Yorker Magazine claims that Democrats found someone that saw Brent Kavanaugh expose himself at a party during his first year at Yale. Wow! What a coup de gras! NOT!

What the headline doesn’t provide is the fact that this claim is nearly as unsubstantiated as the claims being made by Christine Ford who will have her chance to repeat her unsubstantiated claim before the Senate Judiciary Committee this coming Thursday. Now that should be a circus.

Let’s hope that Charles Grassley is good to his word to keep things on track and not allow Democrats on the committee to pontificate for hours so that they can drag out the proceedings and make ridiculous apologies to Ford for her having to air her grievances before the committee unnecessarily. They would rather have had Kavanaugh crumble and fold his tent so that the nomination would return to square one and trail out over the next three months as this one has done.

So, back to Yale. The accuser, a Deborah Ramirez, apparently told the New Yorker that she wasn’t even sure that Kavanaugh was the one who exposed himself. In fact, according to the New Yorker, it took her six days of “carefully assessing her memories and consulting with her attorney” to convince herself that Kavanaugh was the one who did it. But that didn’t stop the magazine from publishing the story. After all, where there’s even a wisp of smoke about a conservative judge doing something flagrant, better publish than let a good crisis pass by unused, right?

Of the several dozen people contacted who might have been at the party where this act was alleged to have occurred none confirmed the claims from personal knowledge.

Question: How long have the Democrats had to rummage around in 35 years of history to find another activist Democrat schoolmate of Brett Kavanaugh willing to make unsubstantiated claims of sexual misconduct against a Supreme Court nominee? How many declined the job?

Fact: Ramirez failed to mention this alleged event to her parents at the time.
By her own admission, a “fake plastic penis” was, at one point waved in her direction by an un-named person. She was highly intoxicated by that time. How does she know that anyone exposed themselves? In her admittedly intoxicated state, could she have just confused the fake with the real? She even admitted remarking at the time, “That’s not a real penis.”

Fact: Ramirez subsequently continued to socialize with the two men she claims were most active in the offense and even attended one’s wedding and posed smiling for pictures with Kavanaugh.

Important Fact: Ramirez is an active Democrat who “…works toward human rights, social justice, and social change.” How convenient! A social justice warrior just happens to pop up at the very last minute just in time to toss more gasoline on a Democrat-lit fire fueled by questionable allegations – both of a conveniently sexual nature sure to gain plenty of media attention.

The article made mention of Kavanaugh having been a member of a fraternity – DKE – which makes me wonder since at most colleges and Universities freshmen are required to live in the dormitories, but the comments about the reputation of the fraternity as one that hosted “misogynistic parties” or the allegation that at some point Kavanaugh was a member of a “secret group” of questionable nature are completely irrelevant to the incident at hand because if they were in any way true, they took place after this event and had no bearing on it at all. Whether these allegations were even true has not been verified.

Again, a highly questionable accusation. More students than not, including an allegedly intimate friend of Ramirez deny that the event happened or denied hearing about it. In point of fact, this actually adds fuel to the fire suggesting that the Democrats and their Socialist Press who are terrified that Kavanaugh’s appointment to the Supreme Court will mean the death of abortion on demand (yet to be determined, given Kavanaugh’s strong statements about the importance of precedent) are willing to continually dig up spurious allegations that are unsupported by verifiable facts in the hopes, perhaps, that Brent Kavanaugh would reach the point where he says, “Just leave me on the Court of Appeals and I’ll settle for that. It’s not worth the hassle.” One might not blame him, but the country would be far worse off if he does.

How much more will it take before there is a concerted backlash against the Democrats among not only Republicans and conservatives but the more reasonable part of the Democrat Party that has not completely gone over to the dark side. It has certainly been about enough to ensure that the leftist wing has lost any reasonable hope of holding onto the votes of Independents. They typically think before casting their votes. Actually, I believe the backlash has already begun and will hang around long enough to do serious damage to the dreams that the Pelosis, Shumers, and Hironos of the world hold for some sort of Blue Wave in early November. They should understand that hurricane season is about over by that time and all that will remain is a vivid Red Tide ready to wash away the Democrat Party.

Rightfully so. This dark circus of unverifiable, 30-something-year-old accusations and sordid tales of uncorroborated events designed to besmirch a good and decent man for pure political reasons must end. Let’s hope it does not drag out past Thursday. We have a country to save. This is a needless distraction. Time to vote!

Judge Kavanaugh Intends to Fight for His Honor