It was 1990 and at the time I was a single mom, working in a Beverly Hills department store selling cosmetics to “the rich folks” while going on auditions for acting jobs. I had just learned my mother, with one of her teacher friends, were driving from Texas to California for a visit. I was thrilled! They planned to stay with my sister, Lisa, since she and her husband lived in a nicer area than my son and me.

I couldn’t wait to show my mother my life.  Yes, my Hollywood apartment was, in Bette Davis terms, “a dump”. It was very small and in a dicey area, and yes, when I first moved in there were whispers that the previous tenant might have been raped in my apartment…But the manager installed a brand new metal security door before my son and I moved in so I felt we were as safe as possible, as long as we ran–FAST–from the parking lot to our quickly-locked new home. And my car was also questionable, but it ran (most of the time) and had gas in it. Most of the time.

The day Mom and her friend arrived I made plans to take the day off, pick her up and take her to a very fancy lunch in Hollywood. I saved up extra money by planning to pay a few bills a little later than usual. I also bought myself a new dress–a replica of the brown and white polka-dot dress Julia Roberts wore in that year’s big hit movie, ‘Pretty Woman’.  (Interesting that my idea of “impressing Mom” was to wear the same dress as a prostitute in a movie, but that’s what my young actress brain decided to do…)

That morning I called Mom to tell her what time I’d pick her up, expecting her to sound as excited as I was about our big Hollywood day together. Instead she said the last thing on earth I expected her to say: “Let’s not. Why don’t you just come out here and have lunch with us?”

I was floored. Destroyed. My mother sounded startled at my possibly overly dramatic response, which was basically made up of a lot of sobbing into the phone. “Why?” I said. “I took the entire day off. Don’t you love me and care about seeing where your grandson and I live?”  She didn’t really have an answer as to why she didn’t want to come to Hollywood other than saying she preferred not to, but finally she acquiesced.

Deciding she was just exhausted from the long drive (because seriously, who in their right mind wouldn’t want to spend a day in Hollywood?), I fixed my makeup, straightened my prostitute dress, and hopped in my bright yellow (sputtering with black smoke) Chevette to pick up my mother. 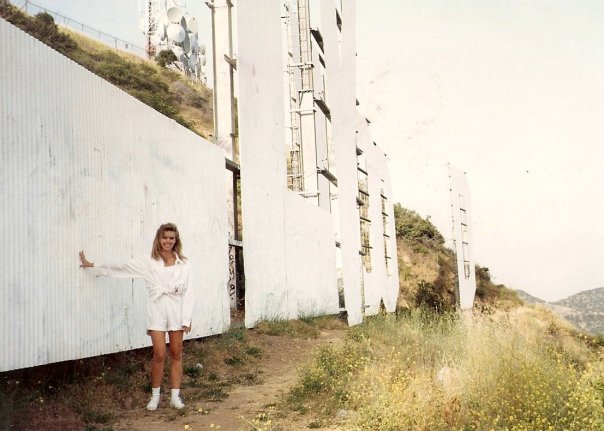 Our first stop on my Hollywood tour was to take Mom to my all-time favorite place, Hollywood Boulevard to see the stars on the sidewalks, followed by my beloved Grauman’s Chinese Theater where the handprints and footprints are embedded in cement.

I was gleeful, beyond excited until, for the very first time since I’d arrived in Hollywood as a young girl, my rose-colored-glasses finally fell off. I looked over at my mother’s fearful face and I saw what she saw. Back in 1991, Hollywood was not the Disney-version “tourist safe” place it is today. Before it was homogenized in the early 2000’s,  Hollywood-proper was absolutely filthy and more than a little dangerous (not unlike my apartment). The boulevards were lined with sex shops, pink porn and black and silver spikes blinking in the windows. And in those days Grauman’s wasn’t surrounded by the giant, safe outdoor Hollywood and Highland shopping center, it was all right out there in the open with young runaways and homeless people lying on the sidewalks to the point that you literally had to step over their legs to avoid being tripped. (Those same type people are now upright, dressed in superhero costumes asking for money, but I digress…)

I looked at Mom’s face and saw her anxieties growing, so I made an attempt at a “let’s not get killed today” joke to lighten the mood as we practically ran back to the car and headed for lunch.

I took her to a very famous restaurant that she had never heard of but immediately freaked out when she saw the prices. She ordered the least expensive thing on the menu, ate half and took the rest with her. So did I. This was at least Strike Two on my tour, and I knowing Strike Three, Four, and possibly five would happen if I took her to my rape-y apartment we both agreed I should take her back to Lisa’s house instead.

After dropping her off I thought about the vast contrast of the beautiful day I had imagined in my mind as opposed to the horror story it actually became, and the new fears my mother would be taking back to Texas.  All I wanted was that one perfect “Mother and Daughter” day, the kind you see in every television commercial ever made. I pictured us time-traveling back to a 1950’s type movie, going shopping, picking out matching hats and purses, getting our nails done and then gleefully throwing our hatboxes and bags and bobbles into the back seat of our non-existent shiny convertible full of gasoline…

Throughout the years my sister has had to continually scold me when I’ve complained about my ‘perfect mother’ dreams, and time and time again I’ve been disappointed when I’ve tried to create scenarios to make those dreams come true. With every changing season, Lisa has had to hear the same old story:

Ann-Marie: “Where is that mom who calls me up and says, ‘Have you seen the latest pair of (Spring, Summer, Fall, Winter) shoes? Let’s go out and buy a pair right now!'”

Lisa: (over and over, every season) “That’s just not who she is, when will you figure this out?”

Flash forward to “me” now, a million lifetimes later. I am living back in Texas as a full-time caregiver to both my parents. A few weeks ago my mother had a freak accident when their cat bit the back of her hand. The tiny nick hit a blood vessel and quickly turned into cellulitis.

I stayed in the hospital with Mom for two nights, curled up in that atrocious chair/bed thing but constantly watching her closely. Praying. Thinking, reflecting.

When I needed my mother, there she was. Every time. When I was first (incorrectly) diagnosed with a disease in 2000, my parents drove their RV from Texas to California to take care of me and stayed an entire month. They never interfered, stayed out of our way–but they were there for me. They have always been there, as I am now for them.

That night in the hospital, I finally realized I never really needed that “perfect” mother, the one who would teach me how to don makeup or choose new fashions. Somehow I always inherently just “knew” those things. As far as I know, other than my paternal grandmother I’m the only woman in my immediate family who has ever cared about fashion and makeup. No one ever needed to teach me how to put on lipstick and eyeliner, I just knew. In an extremely narcissistic, unrelated way, much like Mozart knew how to play piano as a child, I’ve never actually needed my mother’s help or advice with the silly stuff in life–I was born this way. (Yes, I deserve cruel comments about comparing Mozart’s genius with my ability to apply makeup. Go for it.)

But now here I am, with all of the sad, crazy things happening in my life with both my parents, with my son’s diagnosis of MS along with my own, and I realize that although God didn’t give me the mother I thought I always wanted I have always had the mother I needed–the Mother who has always taught me what is real in life. She taught me about Christ and His lessons, and what real compassion is all about. She taught me patience, and Grace. She taught me the things that make your soul grow–the things that are making me a much better person today. With or without makeup and fancy clothes.

Thanks to the Mother I have always needed, I’m becoming closer to God. And as my Mom was singing in the hospital, quietly, while she was in so much pain, “It is well with my soul…”