I recently joined the board of advisors of a newly formed organization, The Holocaust Education Film Foundation; its objective is to “[p]roduce and distribute personal and impactful television documentaries featuring the lives of Holocaust Survivors, as told in their own words.” In other words, while we still have survivors of mankind’s single most horrendous creation walking among us, we are recording their stories, “lest we forget.”

At the end of his life, Moses was told by G-d at the Jordan River:  “Look west, south, north and east. You won’t enter the land but you will see it.” Think about this for a moment. Looking west, south and north makes absolute sense, for there lay the lands that G-d had promised the children of Israel. But why look towards the east? That was where they had come from. There lay all the travails that they were escaping. To the east was Egypt. That was where they had been. It no longer mattered. What mattered was where they were going.

But we are taught that G-d does nothing on a whim. There is a vital lesson for us here if we take the time to absorb it:  To have perspective — to understand what you are seeing when you look at a new place — in addition to looking where you are going, you must know where you have been. That is why we study history and if we fail to do so, we lose context and understanding of the present and into the future. Each story told by this dwindling number of survivors adds meaning to the existence of each and everyone of us. 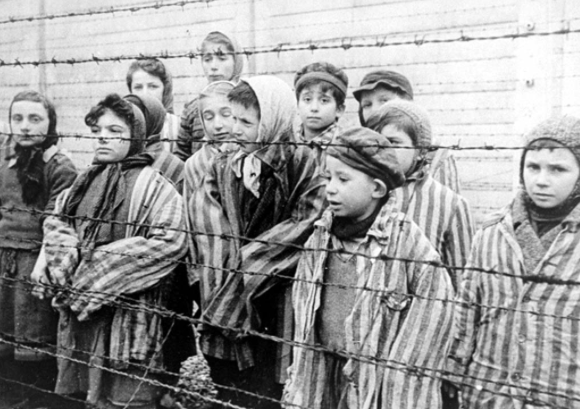 The first of these documentaries features Joe Engel, a gentleman whom I met six years ago when I first came to Charleston. Joe was born in Poland. When the Nazis came, they put him in Auschwitz. He was 14 years old and he was alone. Most of his family was exterminated. Think about that for a moment: 14 YEARS OLD! Alone! He survived, only G-d knows how or why.

He had some family in Charleston, so after the war, he found himself in the center of the South. Talk about a fish on a bicycle. Here is this young Jew who had to that point spent his life first in a small Polish village and then in Hell, who finds himself in the land of Bubba and barbecue. He made his home here and became a major fixture in the city of Charleston. When asked how he made his living, Joe says, with a twinkle in his eye, that he was a C.P.A. (Cleaning, Pressing and Alterations). He is a man who was seared ineradicably by his early experience with the worst evil that has ever been manifested on Earth and came out on the other side with a wry sense of humor.

The city of Charleston has named a street after him. Most days, he can be found on a bench in White Point Garden at The Battery, wearing a tag that says “Joe Engel, Auschwitz Survivor.” He advertises that fact, but not because he is looking for sympathy. Joe Engel is definitely not a “victim.” He wants people (especially young people) to stop to talk with him. He wants them to ask him questions. He wants to tell them about the Nazis and about Auschwitz and about his family and about what happened to him and to so many others because he doesn’t want it to be forgotten. He fully subscribes to the biblical lesson of Moses:  To have perspective, in addition to looking where you are going, you must know where you have been.

That is why Joe sits on his bench, open to all comers and that is why his is the first documentary that has been released by the Holocaust Film Foundation. (It may be purchased at Amazon HERE.)

Most people have never met a Holocaust survivor. I, on the other hand, grew up surrounded by them. I was the exception rather than the rule — my parents were born here in the United States, but many of my friends were the children of survivors. In 1948, when I was four years old, I had my first conscious experience of these survivors. There suddenly appeared a family of three people — a mother, father and a boy of roughly my age — who took up residence in my grandmother’s basement, which had been fitted out as an apartment for them. I had no idea who they were and when I asked I was told that I should just let them be. I was told that they needed peace and quiet. At four years old, just by looking at their faces I was already aware that they had been through something terrible. I had no idea what that terrible thing might have been, but I knew that something literally unspeakable had happened to them.

Looking back I realize that, even had I been told, there is no way that I could have understood what they had gone through. Thanks to the grace of G-d, I was born in this blessed country. Even now, at age 74, while I know what that “thing” was, there is no way for me to even begin to understand the magnitude of their suffering.

As I grew older, I heard more and more stories, all different, about how the people who surrounded me had survived. The mother of one of my friends had fled into the forest and had stayed ahead of the Germans for the entire war as a member of several partisan groups, blowing up German railroad tracks and bedeviling the Nazis (one of those partisan groups was the Bielski group, which was the subject of the movie “Defiance” starring Daniel Craig). She always said that she was fortunate. She could hit back. Another friend’s parents had been hidden in a cellar in Poland for most of the war by “Righteous Gentiles.” The father of another of my friends survived three years in Auschwitz and the Death March that the already-defeated Nazis nevertheless forced upon these starving, emaciated people. He was pulled off the Death March and rescued by Oskar Schindler.

I once asked him how he had survived and he told me the following story:  Just before the Nazis marched into Poland, he had succeeded in receiving an audience with the Belzer Rebbe (one of the great rabbis of that time). He asked the Rebbe if he would survive and the Belzer Rebbe looked up at him and told him that, yes, he would survive. Then Nathan gave me with a wry smile and said:  “I survived because I didn’t want to make a liar of the Belzer Rebbe.” Another friend’s father told me that he was able to survive because he would constantly remind himself of the phrase that was engraved on King David’s ring:  “This too shall pass.” Nothing is forever. Nothing remains the same. At some point, this will be over.

Some surviving members of my mother’s Romanian family survived the war and after the war, made their way to Israel after being interned on Cyprus. If you have read “Exodus” by Leon Uris or seen the movie, then you know their stories. Members of my wife’s family were among the few survivors of the Kovno Ghetto in Lithuania, their children smuggled out of the ghetto to be hidden by a non-Jewish farmer. One of my wife’s great-uncles is showcased and recognized as a hero of that ghetto at Yad Vashem, the Holocaust Memorial in Jerusalem.

None of the many survivors whom I have known would (or could) give an answer as to why they had and so many others had not. At first, none wanted to tell their stories. After the war, most of them clammed shut and would not talk about what had happened to them. But once the Holocaust deniers started slithering out from under their rocks beginning in the 1970s, more and more of the survivors decided that they had to speak up and recount what had happened to them.

Neither did the American soldiers who fought the Nazis and liberated the survivors of the concentration camps want to talk about their experiences. My uncle, a member of Patton’s army, didn’t talk about his wartime experiences until the deniers began to spread their lies. Then, he started going to schools and other groups, talking about what he had seen and showing them the movies he had taken, proof that what the survivors were saying really did occur. He did this for several decades, until he passed away about 15 years ago. Now, his movies and testimony are at the U.S. Holocaust Museum in Washington, D.C.

They are leaving us now — these survivors — and we must preserve their stories and give them their voices before we lose them. They are precious. They must be cherished and we must make sure that they know that we will remember them and what happened to them. We at the Holocaust Education Film Foundation are making as many of these documentaries as we can before they leave us. And afterwards, we will tell the stories of their children who came after them.

I will not forget something that one of them told me:  “Say something nice every day to those you love. You can never know how long you will have them.”

This article was originally published in the CharlestonMercury.com

Capitulation (and/or Political Correctness) is Not the Answer to Racism

The Real John Brennan: Ex-Intelligence Unveils Who the Ex-CIA Director Really Was