The recent funerals of The Queen of Soul, Aretha Franklin, and Senator John McCain demonstrate to me what a classless and disposable culture we have become. I never could imagine in my most bizarre or hallucinatory fantasies that a funeral for Aretha Franklin could become some sort of weird and bent Toga party for the Democrats. Or that a daughter of a deceased Senator would use her father’s funeral to bash a sitting President.

Part of the issue is selective political correctness. Current American society mistakes political correctness for manners. Nothing could be further from the truth. I was raised to listen before I speak. At times, I fail miserably because my passion gets the better of me. However, I was also taught to know when to sincerely apologize and to exercise the proper decorum in public.

Political correctness is only applicable in popular and political culture in the most delusional manner. Some of the narcissists in the entertainment world and in Washington look in the mirror and see themselves as some sort of unnatural god. Well, in my analysis, that is a god with a pronounced small g. Faux entertainers and fake politicians demonstrate an even smaller character and presence in their public behavior and public statements these days. That is especially true when they are communicating to or about someone whose stance or opinion that they disagree with.

Welcome to the Church of the All Mighty Me. If I think it, it must be true! If it feels good to me, than it must be good for all. If I speak or behave in a manner completely out of the realms of normal adult behavior, well that’s OK; I am just “expressing” myself and keeping it “real.”

Being pathetically fake is the new American Freedom. 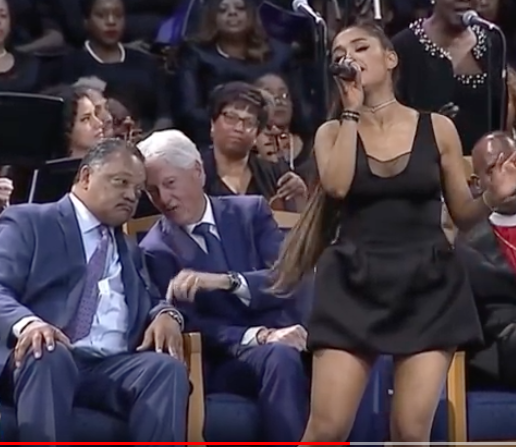 Consider the montage at the Aretha Franklin funeral. There were so many horrifying moments that it is hard to catalog them all. The one that has gotten the most attention is the picture of a leering Bill Clinton staring unabashedly at the vastly mediocre Ariana Grande’s rear end. Who came up with the brilliant idea of seating the Mount Rushmore of Democrat leeches behind the performers anyway? Why did someone think that Ariana Grande was a great fit for the Carole King song, “You Make Me Feel (Like a Natural Woman)? Maybe they should have gotten Carole King to sing it. She wrote the song with Gerry Goffin, for Aretha to begin with. I doubt Carole King would have allowed herself to be disrespected and groped.

Or how appropriate was it for Maxine Waters to imitate the Marvel character Black Panther at Aretha’s send-off? Of course, many members of the press are reporting Ms. Waters “Wakanda Forever” as a perfect moment. Well, as always, perfection is in the eye of the beholder.

When I recently wrote the tribute to Aretha in Politichicks, “Reflections on Lady Soul: Aretha Franklin,” I kept myself out of the majority of the article. Why? Because it was about ARETHA. It was about respect for the Queen of Soul.

The problem with Aretha Franklin’s funeral was that it seemed more about the participants and less about Ms. Franklin. I kept expecting Aretha to rise from her coffin and say, “Stop this madness!” More than likely, she was watching this travesty with no small measure of amusement with saxophonist King Curtis from Heaven.

Whether it was shrieking performers or ministers with misplaced hands, the funeral continued past the point of reason in it’s actual length. Six and half hours. Aretha Franklin always got to the heart of the matter, succinctly, with her musicianship and her voice.

Was Rev. Al Sharpton misinformed? Did someone advise him that this was also a Democrat fundraiser? In his speech, Reverend Sharpton corrected his misspelling of the word “respect” in reference to his recent radio show. He then demonstrated his lack of true respect for Aretha by taking the low road and insulting our President for hiring Aretha Franklin to work for him. Well Al, a sign of respect is paying someone for their talent and time, believe me. As Aretha’s true friend the late Ray Charles said, in response to why he was playing for Ronald Reagan,“Hey man, I’m working for the Republicans because they pay me.”

Equal in tedium and with an equal amount of self-serving rhetoric, was the behavior of some of the speakers at Senator John McCain’s funeral. Surprisingly, daughter Meghan McCain took the opportunity of her father’s funeral to insult President Trump. Now, I understand that grief is a complicated animal. But it is hard to imagine what possessed Ms. McCain to state the following insinuation:

“We gather here to mourn the passing of American greatness. The real thing. Not cheap rhetoric from men who will never come near the sacrifice he gave so willingly. Nor the opportunistic appropriation of those who live lives of comfort and privilege while he suffered and served.”

Any doubt of whom Ms. McCain is speaking of? Was that statement necessary? Ms. McCain further stated, “The America of John McCain had no need to be made great again because America was always great.”

But Ms. McCain, in recent decades, America has not always been great. We have, quite literally, bowed to other countries, made horrible deals for our people and not protected our citizens at their most crucial moments. The true American patriot is not delusional. However, I understand Ms. McCain’s grief and offer my sincere condolences.

Former President Obama got in an anti-Trump jab when he stated the following in his eulogy: “So much of our politics, our public life, and public discourse seems small and mean and petty. Trafficking in bombast and insult, phony controversy, in manufactured outrage…”

This comes from the same President who called Benghazi a phony scandal.

Granted, President Trump is not a polished, phony politician. Thank God for that. But the fact that the “elite” ruling class can say anything, anywhere, at anytime and get away with it should be insulting to any thinking American. That is far too greasy of a meal to digest in one sitting for this writer.

The use of a funeral pulpit to perpetuate a political agenda strikes me as a new low in American politics. It is a sleazy and unseemly practice and it needs to stop now.

Anni Cyrus: Sold By My Father Into Child Slavery Under Islam

Part 4 of 4: The Democrat Party’s War On America and the Constitution