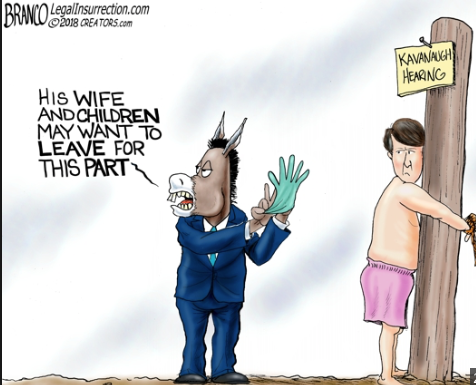 Thank God the Senate Judiciary Hearings are finally over. They were, perhaps, the most embarrassing days of this century. Truly a fiasco of extremism.

During the opening statements in the Senate Judiciary Committee on Tuesday, one of the most ridiculous “conspiracy theories” trotted out by Democrats among their many irrational fears about the “Separation of Powers” being completely dismantled by the evil Brett Kavanaugh, was one that, believe it or not, was explicitly proffered with a completely straight face. They continued to beat this drum all week.

Allegedly, according to the left, Brett Kavanaugh was placed in nomination solely because of his public writings in which he questioned whether a sitting President could be indicted or charged with criminal offenses while still in office. President Trump is alleged to have pulled Kavanaugh’s name out of the clear blue (because he was allegedly not on anyone’s recommended list of candidates) only because he would protect the President from criminal charges while the President was in office.

First of all, the constitution speaks explicitly to this issue. If it has never reached the Supreme Court in the history of our country, I am not certain, but if it ever did, one of the reasons we have nine members on the high court is to gain a broader consensus on what the constitution allows and provides for while spreading the responsibility among enough justices that a broader level of experiences are brought to bear on the case in question. One vote on such a question as this is not likely to be the deciding factor.

Some might suggest that the make-up of the Supreme Court following the expected Kavanaugh confirmation would continue the narrow margin of originalists vs. progressives that existed before Justice Kennedy decided to retire. The difference is that Kavanaugh is believed to be more ideologically aligned with the other four originalists than Kennedy was. Kennedy was far more mercurial in his decisions – sometimes siding with the progressives and sometimes siding with the originalists. It was hard to tell where he would land sometimes. The presumption among Democrats is that if Kavanaugh is confirmed, they have lost their evenly split court and now must fight a continual uphill battle to squeeze even more imaginary “rights” into our constitution. The Rule of Law strikes fear in their hearts.

Well, I hate to be the one that bursts the bubble for the Democrats, but even a layman such as myself need only read the constitution to understand the words set down in Article 1, Section 3, paragraph 7:

Judgment in Cases of impeachment shall not extend further than to removal from Office, and disqualification to hold and enjoy any Office of honor, Trust or Profit under the United States: but the Party convicted shall nevertheless be liable and subject to Indictment, Trial, Judgment and Punishment, according to Law.

Note in the second line, following the colon, that the constitution provides that the Party (President or other officer of the United States subject to impeachment) who is convicted is subject to indictment, trial, judgment and punishment…

From that one paragraph one gleans from the constitution what the Democrats fail to realize, understand or acknowledge – that the President or other officer of the United States cannot be charged with a crime until after he/she is impeached and convicted by the Senate of the charges brought by the impeachment. Once removed from office, the law can do to that person as they are permitted to do to any other citizen.

What has come to light since Tuesday’s hearings that makes the Democrats’ claims even more ridiculous is that Judge Kavanaugh’s name was provided to Donald Trump well before he ever became President. In 2016, the Heritage Foundation’s John Malcolm proffered Brett Kavanaugh’s name to Donald Trump months before any suggestion of an investigation or criminal proceeding against the candidate was ever envisioned by anyone outside of the Obama Administration’s Intelligence Community. He had not even taken office yet.

Is there really any extent to which the Trump-haters will not go to undermine his candidate for the Supreme Court, or, for that matter, his Presidency itself? I am beginning to believe the answer to that is a resounding, “No!” It is truly a sad state-of-affairs.

Belle Boyd: A Rebel Above The Mold

When is Enough? When All Firearms Are Taken Away!