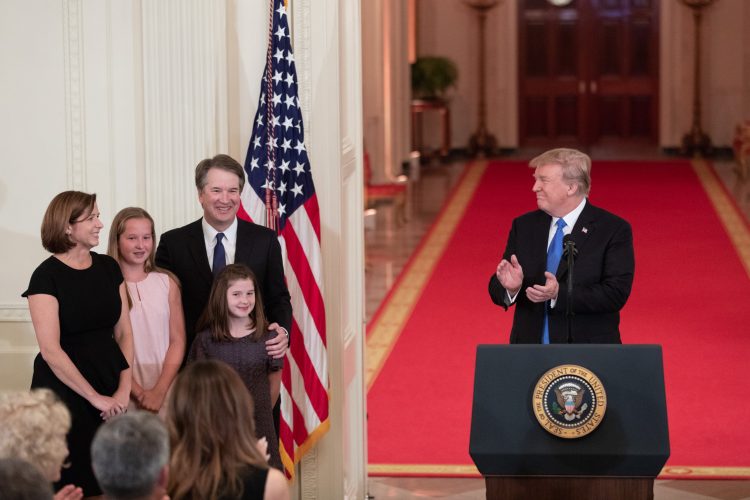 For over a week now the left has assaulted Judge Kavanaugh with unsubstantiated claims of sexual aggression against Christine Ford when he was a teenager. In a letter to Senator Grassley and Feinstein, he has indicated he intends to fight and defend his honor. He will not let this stand.

Here are some highlights of the letter:

“First it was an anonymous allegation that I categorically and unequivocally denied. Soon after the accuser was identified, I repeated my denial on the record and made clear that I wished to appear before the Committee. I then repeated my denial to Committee investigators—under criminal penalties for false statements. I asked to testify before the Committee again under oath as soon as possible, so that both Dr. Ford and I could both be heard. I thank Chairman Grassley for scheduling that hearing for Thursday.”

Brett Kavanaugh has nothing to hide and is ready to meet his accuser. On the other hand, Ford has put up roadblock after roadblock as a delaying tactic. Either she doesn’t want to testify or needs time for her liberal lawyers to coach her and get the script ready.

“All of the witnesses identified by Dr. Ford as being present at the party she describes are on the record to the Committee saying they have no recollection of any such party happening. Last night, another false and uncorroborated accusation from 35 years ago was published. Once again, those alleged to have been witnesses to the event deny it ever happened. There is now a

frenzy to come up with something—anything—that will block this process and a vote on my confirmation from occurring.”

This is absolutely correct. Not one person has corroborated either story.

“These are smears, pure and simple”

The left cannot debate the issues because they would lose. Character assassination is the weapon they always employ to achieve victory outside the normal electoral process.

“And they debase our public discourse.”

Especially the Hollywood left who hurl vile and disgusting language at those with whom they disagree. Yet they cannot see their own moral depravity which is on full display. They are also hypocrites. For example, Debra Messing accuses Kavanaugh of being racist. Yet her OWN show excludes people of color (as does most of Hollywood come awards time).

“But they are also a threat to any man or woman who wishes to serve our country. Such grotesque and obvious character assassination—if allowed to succeed—will dissuade competent and good people of all political persuasions from service.”

It’s a tactic liberals have used forever to keep good people out of service. Unfortunately they are usually successful. Once in a while they meet their match and they may have just picked the wrong guy to pick on here.

I was very happy to see this statement. If the Democrats thought this guy was going to slink away in the fetal position they were mistaken. I’m just hoping some of the Senate Republicans grow a backbone like Kavanaugh has. And we hear a lot about the threats against Christine Ford but the media NEVER covers the nastiness directed toward Kavanaugh’s family. Here are a couple of emails they have received:

“Please tell your rapist, lying, cheating, corrupt b—h of a husband to put a bullet in his ugly f—–g skull.”

“Hey b—h, did you know your husband was a rapist before you married him?”

“YOUR HUSBAND IS A LIAR, THIEF, RAPIST AND PROBABLY A PEDOPHILE. BURN IN HELL…”

“I have devoted my career to serving the public and the cause of justice, and particularly to

promoting the equality and dignity of women. Women from every phase of my life have come

forward to attest to my character. I am grateful to them. I owe it to them, and to my family, to

defend my integrity and my name. I look forward to answering questions from the Senate on

It is so obvious this is a man of integrity and honor. And the left, while claiming to support women, are actually hurting women who really are victims of sexual assault. The real war on women comes from the radical left. Kavanaugh is not just fighting for himself but for all of us who are decent and moral people.

Originally I was opposed to having this hearing. But after reading Judge Kavanaugh’s letter I have changed my mind. I think it is critical that he clear his name from this evil slander. It won’t make a difference to the radical left of course but for the average citizen it will.

Politically the Democrats must be totally defeated. They have totally turned constitutional law upside down in their quest to bring down Kavanaugh. It begs the question – why??? What threat could this man possibly pose to them that warrants this level of anger and hatred. One word – abortion. It is the ultimate sacrament to the left. And they will destroy anyone or anything that would impede Roe v Wade. Their ideology has promoted abortion for over 40 years leaving millions and millions of dead babies in their wake. If the defenseless among us are expendable to the left then so is the law or Brett Kavanaugh (or Clarence Thomas or Robert Bork). Ted Kennedy (who is now residing in a place where global warming never ends) started this almost 30 years ago. It’s time it comes to a screeching halt. Thank God we have a man like Judge Kavanaugh who isn’t afraid to fight for what is right. We need more people like him.