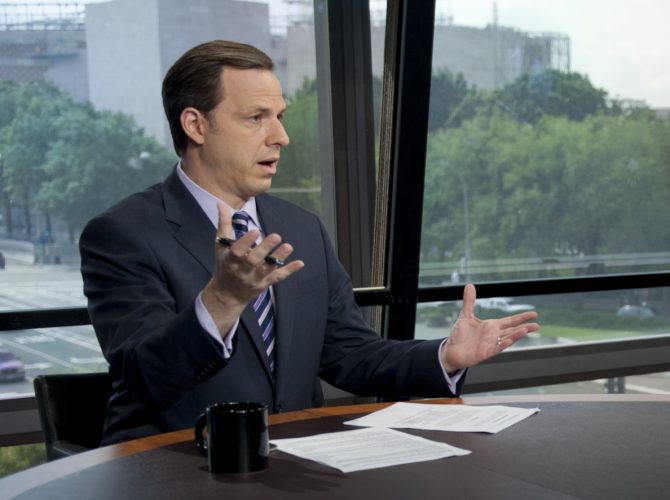 If you thought people like Edward R. Murrow or William F. Buckley represented great journalism, you are mistaken. For we are living in the Golden Age of Journalism right now. Why we sure are! How do I know this? Because Jake Tapper says so! And he’s a journalist and knows things!

Recently Tapper spoke at the American Society of Travel Agents convention. Not surprisingly he engaged in a lot of Trump bashing:

How dare President Trump not consult with the experts who got us into all the problems we have today. He is trying to fix them! It is amazing how the left will not let go of the conventional wisdom that has gripped politics for decades ( maybe even a century). What Tapper sees as dysfunction the voters cheer because they see ACTION being taken to stop it. They don’t need to be lectured on the minutiae or policy. And they don’t care if the experts were consulted or not. Trump is running the government like a business and while Tapper whines and moans, positive results are occurring. The electorate can see that. The media intelligentsia is unable to (or if they do, cant’ acknowledge it because it would mean they are wrong about Trump).

And of course Tapper can’t resist the racist charge. This is a really weak intellectual position the left constantly employs whenever they want to demonize someone. Or when they can’t win on the merits of a debate (which is most of the time). They have used this so often that it doesn’t mean anything anymore. It also rings hollow when the unemployment rate in the black and Hispanic communities are at all-time lows thanks to Trump.

And btw, speaking of lies and facts that are not accurate, where WAS Jake Tapper when the Obama administration blamed the murder of Christopher Stevens on a video? And remember “If you like your health care plan, you can keep it”?

Decency? Really, Jake Tapper?? Let’s see, it was just earlier this year at a Town Hall on the Second Amendment that you let these go unchallenged:

“Dana Loesch, I want you to know that we will support your two children in the way that you will not.”

“Senator Rubio, it’s hard to look at you and not look down the barrel on an AR-15 and not look at Nikolas Cruz.”

“I wished I could have asked the NRA lady a question. I would ask her, how she can look in the mirror, considering the fact she has children, but maybe she avoids those.”

“Was the blood of my classmates and my teachers worth your blood money?”

So to Jake Tapper, this must be “The Norm”.

But he continued with his arrogant assessment of the modern day media:

Please continue reading after you finish laughing, like this fellow:

So CNN is doing “great journalism”? Well, I guess if you define greatness by constantly making things up, then yes, CNN is doing a bang up job. As Sponge Bob might say, they are using their “imagination”. Just in the past 2 weeks CNN has been caught in a total lie in their reporting that Trump knew about the meeting in Trump Tower with the Russians beforehand. They got this information from Lanny Davis and covered up the fact that he was the source. Then when Davis completely reversed himself, they were cooked. Yet as far as I know they are still “standing by their reporting”. I’d sit down if I were them. Of course the sadly delusional Dan Rather STILL stands by his story about Bush being AWOL. It’s pretty bad when MSNBC starts looking like the sane network.

It is frightening how completely out of touch the media are with accuracy. They live in a bubble of their own making where they all convince themselves that their lies are truths. They are not journalists. They are propagandists for the leftist ideology. And Jake Tapper is an accomplice.

President Trump is right in calling fake news the enemy of the American people.

The Golden Age of Journalism? HA! More like Fool’s Gold.