Married priests in the Catholic Church? It’s not really new, my priest is one of them and has a large family. Father Bartus, who has become a friend was married and had  a big family before becoming a priest, he and his wife Laura are wonderful and quite unique as most priests are not married, he was given approval to become a priest sometime ago. I say this because I do wonder if the Church now needs married priests to serve the people of God or is God calling married men and even women to the priesthood?

I wanted to write about the recent Catholic scandal, however, it is a very delicate issue and I did not want to be a contributor to the abused nor the abusers. Blessed John Henry Newman Catholic Church and Father Bartus addressed this issue on Sunday, very eloquently with his sermon. It was beautifully done and the sermon addressed the responsibility and what is expected to occur in the coming weeks ahead. 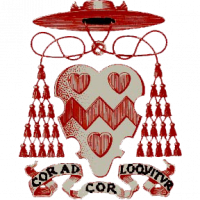 issues. Be assured I am walking this path together with you. Blessed John’s is meant to be a safe harbor from the storm, but ignoring the storm we will not! I encourage everyone to pray the St. Michael Prayer daily, as we are after Masses. This is truly a coordinated demonic attack.

My prediction, and I sincerely hope that I am wrong, is that this will continually drip out over a long period of time. I don’t see a bunch of immediate massive resignations by clerics who all of a sudden develop a conscience and embrace orthodoxy. Dripping out a scandal here, or a scandal there; a heresy here, or a heresy there: we are truly in a unique time in the life of the Universal Church, not to mention the Church here in the United States.

My agnostic uncle, upon hearing this, predicted this is the beginning of the end of Christianity. In a major sense, he’s right. We’ve passed through the Looking Glass. The status quo has disappeared on several levels. The veil is being lifted. But he’s wrong in the ultimate sense. I just pray we all remain faithful long enough to endure this global catastrophe and widespread apostasy to provide a safe harbor during this storm and help rebuild after the storm passes.”

“And if you be unwilling to serve the Lord, choose this day whom you will serve, whether the gods your fathers served in the region beyond the River, or the gods of the Amorites in whose land you dwell; but as for me and my house, we will serve the Lord.” (Jos. 24:15)

One of the alarm bell ringers in the Church today, long calling out scandals but going unheeded from many within the hierarchy, is Joseph Sciambra, who had this to say late last night when the news broke:

“In the midst of this crisis – I am thinking of the victims, and how they must feel right now. For those that somehow held onto their faith in the Church after enduring unimaginable pain, they believed (in succession) that the Bishop, the Cardinal, the Pope – he would do the right, if he only knew. Well, they all knew. And they didn’t do the right thing.”

In an incredible set of allegations that hit the headlines yesterday, the world was directed to an 11-page testimonial from the former Apostolic Nuncio, Archbishop Viganò, to the United States. In expanding on the allegations relating to Cardinal McCarrick, the entire world learned that not only did Pope Francis allow McCarrick to return to active ministry that Pope Benedict restricted – as we know Pope Francis did with Cardinal Mahoney when Archbishop Gomez tried to restrict him – but he knew of the serious allegations beforehand. And it turns out that McCarrick was directing Pope Francis all along, played a major part in his election as Pontiff, and together with Cardinal Wuerl and many other prominent bishops–too many to name here–and was responsible for having Cardinal Burke removed and Cardinal Cupich of Chicago and Bishop McElroy of San Diego put in place. Fathers Thomas Rosica and James Martin are named as being mouthpieces of the whole cabal. To most of us, this should not be a surprise – what is surprising is that a true insider explained the connections and the cover-ups and the enabling in great detail: who knew what, when, and how.

In the second time in two weeks, I had to force myself to digest gruesome details and the immediate implications. Due to the gravity of office of the papacy itself now being compromised to such a degree, the long-term implications remain unclear. One of them must include praying fervently, and I mean fervently, for your clergy, especially Bishop Lopes.

I think the ultimatum Joshua gave to the wayward Israelites must be asked of our bishops and of our priests–including myself–and deacons: “If you be unwilling to serve the Lord, choose this day whom you will serve.” We all have temptations and sin, but the key is to choose repentance not cover-up; it’s the same choice that faced the Israelites in their time. As we know throughout their long history, some did and most ultimately didn’t. It was to their ruin. In our day, the warning given at Fatima over 100 years wasn’t heeded; the warning given by Our Lady of Good Success from the 1500s (and specific revelations about the 19th, 20th, and early 21st centuries – revealed in the 1700s) which spells out exactly what’s going on now, way back then, wasn’t heeded. Humanae Vitae is ignored and mocked by so many. Following Catholic discipline is, in the words alleged by our present Pope in the testimony by Archbishop Viganò, “right wing.”

Jesus said: “The words I have spoken to you are Spirit and life. But there are some of you who do not believe.” Jesus knew from the beginning the ones who would not believe and the one who would betray him. And he said, ‘For this reason I have told you that no one can come to me unless it is granted him by my Father.’

As a result of this, many of his disciples returned to their former way of life and no longer accompanied him. Jesus then said to the Twelve, “Do you also want to leave?”

I’m not sure about you all, but this whole thing has struck me to the core. Before I became Catholic, I knew there was corruption along these lines, but nobody knew the rot was this deep! We are at a moment not only like the Israelites were with Joshua, but at a moment like the disciples were with Jesus when he explained the mystery of the Eucharist. It sounded ridiculous. Jesus was claiming to be God, and not only God but that God’s flesh and blood were somehow truly present in consecrated bread and wine? That was too much for them. It’s frankly too much for most today, as we all know.

But look at the options: a Church where large portions are hijacked or…? Or what? Psychology? Communism? Protestantism, and then which type and subsection? Eastern Orthodoxy, and then which Church and how to deal with their problem of unity and authority in matters of faith and morals? How about Buddhism? Atheism? Or maybe just agnosticism and wandering through life? And do these not also have morally compromised people in them and people who cover up? It goes to the root question: is the Catholic Church true or not? Are her claims about herself true?

Simon Peter answered him, “Master, to whom shall we go? You have the words of eternal life. We have come to believe and are convinced that you are the Holy One of God.”

Interestingly, according to the apparition of Our Lady of Good Success, renewal in the Church begins after all is exposed by the light of truth. In the meantime, we have to endure. And it will become a smaller Church in that meantime.

Who turned out to be real hero in this story is Pope Benedict XVI who tried to address this scandal at its root – not only by trying to remove bad clergy but by addressing the various heresies and liturgical abuses used to support it – but he was partially thwarted. He’s praying for the Church during these dark times now. In, what is now a famous prediction because of its accuracy, the-then young Father Ratzinger said in a lecture he delivered in Munich in June, 1970:

“From today’s crisis will emerge a church that has lost a great deal. It will no longer have use of the structures it built in its years of prosperity. The reduction in the number of faithful will lead to it losing an important part of its social privileges. It will become small and will have to start pretty much over again. It will be a more spiritual church and will not claim a political mandate flirting with the Right one minute and the Left the next. It will be poor and will become the Church of the destitute.”

If that doesn’t describe the Ordinariate and other scattered faithful parishes here in the United States, I don’t know what does.