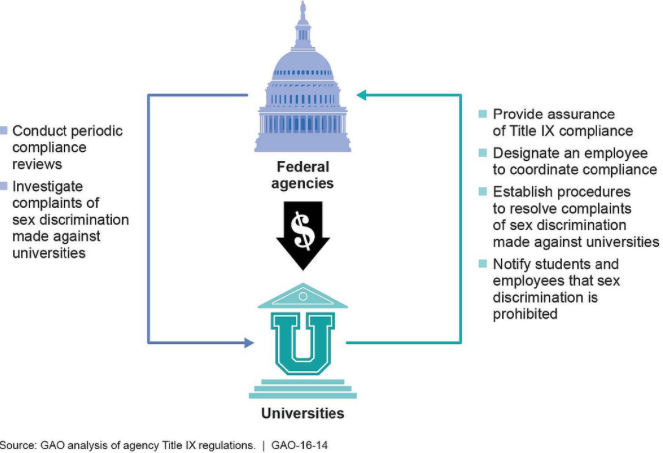 Let me preface these remarks by saying that sexual harassment, assault, or any other offense of that type is abhorrent to any right-thinking individual and nothing here should be construed as condoning, trivializing, or otherwise diminishing such offenses. But there must be reasonable measures in place to ensure that all parties to the situation at hand are treated according to the long-standing principles of due process and innocence presumed until proven guilty.

That having been said, the Politico Morning Education newsletter this morning related the fact that a “leaked draft” of proposed revisions to Obama-era regulations regarding the handling of sexual assault complaints by schools and colleges under Title IX jurisdiction.

The gist of the article suggests that many within the academic establishments are disturbed by the regulations that allow the accused individual access to all the evidence available to the victim. Huh?

Yes, the schools seem to think that it is “reasonable” to prevent an accused from accessing evidence that might very well prove exculpatory. Things like text messages, phone records, emails, and more.

From the beginnings of our country, there has been a set of rules whereby individuals accused of criminal acts are accorded a presumption of innocence until proven guilty and provided with all the evidence collected both for and against them. It is called “Discovery” because it is the opportunity for the defense to know and be able to examine everything that has been collected by law enforcement concerning the case at hand.

But the key difference between the cases brought under Title IX and such cases that occur outside the realm of academia is that the schools have a vested interest in controlling information (evidence) that might reflect negatively on the school administration, police force, or their operational procedures and policies. Most notable in this case is their desire to be able to “convict” the alleged perpetrator without involving outside law enforcement and without the cumbersome requirements of discovery or due process that would be afforded a defendant otherwise.

In many instances, campus police do not have a strong law enforcement background. They can be as simple as security guards or as sophisticated as a city police department but there are no uniform standards when it comes to campus police. Investigative skills might not be as well developed as those of a municipal police department or county sheriff’s investigator. Evidence handling can often be sub-standard as well which can often hinder a law enforcement agency when the case winds up in their hands long after the event took place. Chains of evidence can be broken, evidence can be damaged from improper handling and storage while the victim and the defendant can wind up not receiving a just outcome.

So, what is a school to do? That is what the guidelines are supposed to tell them and us? Since the link to the leaked draft of the guidelines requires enrollment in “Politico Pro”, I was not able to read the guidance document, but I would hope that the sorts of mishandlings that have occurred in the past with incidents like the Duke Lacrosse Team fiasco and several others, that they would recommend that accusations of sexual misconduct would be immediately reported to the nearest law enforcement agency having jurisdiction over the campus location. By doing so, the claim could be expeditiously handled by professionals who know about evidence handling and interviewing witnesses while eliminating any possibility that concerns over negative publicity could taint an investigation and prevent all parties from receiving fair hearings and just conclusions.

I have never understood how an academic institution could conduct their own investigation/inquiry into an alleged offense of this magnitude and make determinations that strongly impact both victim and the accused, and then expect outside law enforcement to pick up where they left off and prepare a case for prosecution under criminal statutes of the state in which the alleged offense occurred. That seems like putting all parties through a double jeopardy gauntlet.

Put simply, schools, colleges, universities, are not disinterested institutions with the appropriate staff and resources to handle a criminal investigation. Protecting the school’s reputation by attempting to handle such cases internally just does not make sense.

Another article (at the College Fix website) attacked the “leaked draft” that is still preliminary and subject to significant modifications, according to the Department of Education, picks it apart on several other issues including ambiguous definitions and the suggestion that “panels” that typically review cases of campus sexual assault be replaced with a “single investigator” approach. It remains to be seen how much of this draft makes it into the final rules that are said to be mandatory once a public comment period is completed and the rules are published in the Federal Register.

Here’s hoping that once the administration produces an actual document intended for publication that many of the complaints about it will have been resolved, but if the guidelines turn out to allow the schools to conduct their own investigations and withhold evidence from the accused, I believe I would be asking questions before any child of mine was allowed to enroll in such a school. As that lacrosse team found out…even with outside law enforcement involved a fair trial is not always guaranteed, but when a school is able to dispose of cases behind closed doors and without all parties knowing about all the evidence – good or bad – you are just about guaranteeing that someone will come up on the short end of the stick. It would not be my son or daughter. That is for sure. College Administrators are no substitute for a court of law. Just knowing that committing such an offense on school property will surely result in criminal prosecution might go a long way toward deterring such behavior. At the same time, knowing that one could face perjury charges might also deter false allegations that can easily destroy reputations.

The Politicization of Rape