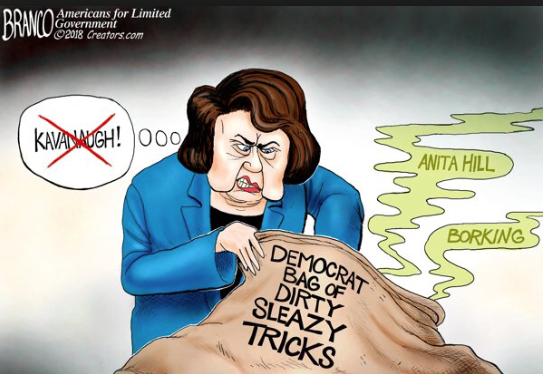 Wednesday morning a recording of an interview between Judge Kavanaugh’s accuser’s attorney and Anderson Cooper made what many suspected totally transparent to anyone who has followed the approach that the Democrat Party has taken to the Kavanaugh nomination.

Ms. Ford’s attorney, a Democrat Party donor and former Clinton lawyer, made it clear – even after her client said she would welcome the opportunity to testify before the Senate Judiciary Committee regarding her allegations against the nominee – that her client would not testify at a September 24th hearing being called for the express purpose of allowing the accuser to put her allegations on the record and provide an opportunity for Judge Kavanaugh to respond. The hearing was proposed for either a private or public format as Ms. Ford would be most comfortable.

Instead, now Ms. Ford is insisting on a complete FBI investigation be conducted prior to any testimony by Ms. Ford before the Committee.

There are a couple things wrong with that.

First and foremost, the accusation involves events that may represent criminal assault, sexual assault, or attempted rape. All or any of those offenses are state violations for which the FBI lacks any jurisdiction to investigate. A citizen cannot just demand that the FBI investigate a crime that does not, in and of itself, violate a federal criminal statute.

Second, and most laughable, anyone with even a modicum of common sense would point out that if the accuser truly believed that there was a need to delve into a 36 year old allegation of teenage (juvenile), drunken debauchery her approach to disclosing this act was both bizarre and poorly executed.

Even if you give the accuser the benefit of the doubt for a moment, the Congresswoman and Senator to whom she divulged this information were disgustingly negligent and calculating in withholding that information from the Judiciary Committee for a very long time. In fact, they were aware of the general allegations before the Kavanaugh confirmation hearings had even begun. The initial disclosure was made to Ms. Ford’s Congresswoman in very early July. Within days of that disclosure, Senator Feinstein was aware of the allegations and should have brought them before the Committee without delay. Instead, Feinstein deliberately and with what seems obvious calculation, sat on the information for an additional two months (or close to that) before dropping such a bombshell on the nomination process.

As this past week has progressed, it has continued to become more and more obvious that this entire affair has been carefully orchestrated with a clear intent. That intent is to delay the nomination process sufficiently to prevent a final vote by the full Senate beyond the November mid-term elections, after which the Democrats would insist that a final vote be further delayed until the new Congress is seated in January with the hopes that by then control of the Senate would be securely in Democrat hands.

While initially it might have been possible to discount that scenario while digesting the shocking nature of the allegations brought against Judge Kavanaugh, with this latest demand by Ms. Ford’s attorney to delay any testimony before the committee until a “complete and thorough” investigation be conducted by an agency that has, itself, been under investigation for activities that have been directed aggressively against the current administration in a highly political manner, and an agency that has no legal jurisdiction to investigate such an alleged crime in the first place, the intent is obvious. To believe anything else at this point is beyond comprehension.

Fortunately, the sentiment among some members of the Judiciary Committee appears to indicate that the opportunity for Ms. Ford to testify before the committee on Monday is still open, but that the vote on Judge Kavanaugh’s nomination to the Supreme Court will happen on Wednesday of next week as planned. So be it. This needs to end now. What is happening here is totally transparent…and disgusting.