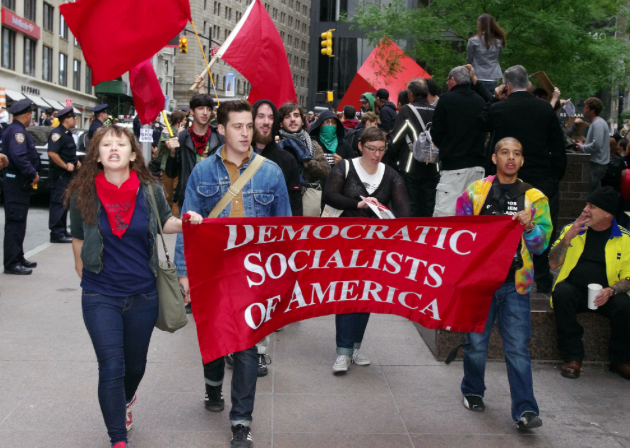 “Like most American Jews, I was raised with the delusion that Israel was a safe haven for me,” Julia Salazar wrote on Mondoweiss, an anti-Semitic hate site, while denouncing the Jewish State.

Salazar’s rant had appeared on a racist site whose creator had complained that his publication had been banned from DailyKos because of “my repeated insistence on talking about the large Jewish presence in the American establishment and the importance of Jewish money in the political process” and one of whose editors had declared, “I do not consider myself an anti-Semite, but I can understand why some are.”

In reality, Salazar had been baptized as a Catholic, her uncle was a Jesuit priest, and her brother made it clear that no one in the family was Jewish. The Jewish part of her past was as fake as the rest.

And it was this biography that the Democratic Socialists of America candidate was running on. The DSA had been hoping to turn Salazar into the next Alexandria Ocasio-Cortez, with the support of radical lefties like Cortez, Cynthia Nixon and Zephyr Teachout by playing up her imaginary biography.

But Salazar, a socialist candidate running for the State Senate in New York, had lied about that, and nearly everything else. Caught on video, claiming, “I immigrated to this country when I was little,” she had actually been born in Miami to an Italian-American mother and a Columbian immigrant father. Despite growing up in a mansion, she claimed to have a working class background. Her mother and her brother between them tore up most of her fake biography of a hardscrabble, immigrant life.

But it was the original expose by The Tablet of Julia Salazar’s lie about her Jewishness that started the flood. And the response from Salazar and her supporters was to accuse the Jewish community of racism.

Salazar, who had her own anti-Semitic history on Twitter, accused the Jewish publication that had exposed her appropriation of Jewish identity for anti-Semitic purposes of practicing, “race science.” The socialist candidate and her supporters insisted that as a “woman of color”, she was a victim of Jewish racism. The Democratic Socialists of America backed their candidate and repeated her anti-Jewish slurs.

Salazar’s campaign had put out a statement claiming that the “fact that, as a woman of color, I am facing accusations that my deeply held identity is a false one says more about the politics of Jewish identity” and was an example of Jews practicing the “bigoted policing of the identity of Jewish people of color”.

New York City DSA co-chair Bianca Cunningham echoed Salazar’s anti-Semitic smear by dismissing outrage in the Jewish community as a question of “whether or not a woman of color can practice that religion.”

Instead of apologizing for her misrepresentations and exploitation of the Jewish community, the DSA’s socialist candidate had accused her Jewish critics of racism. And the DSA took up Salazar’s smear.

Salazar’s meltdown wasn’t the first time that the Democratic Socialists of America had backed anti-Semitic candidates and then stood by them no matter how ugly their bigotry became.

On the other side of the country, DSA-LA continues to back Maria Estrada for California State Assembly District 63 despite her praise for Farrakhan, accusations that Jews were exploiting the Holocaust, and attacking a Jewish Democrat for not keeping “your party, your religion and your people in check.”

“Anyone who believes they are one of ‘God’s chosen people’ automatically feels superior and justified in all they do,” Estrada ranted.

Estrada’s accusation that the Jews exploit the Holocaust was echoed by her fellow racist in New York. “These people exploit Holocaust for their hot takes,” Salazar had tweeted.

The anti-Semitic rhetoric of Democratic Socialists of America candidates like Estrada and Salazar may be inevitable. The DSA views Corbyn’s Labour, with its embrace of anti-Semitism, as its political model.

The DSA’s 2017 convention featured a speaker from the Momentum movement within Labour, a subset which has been linked to much of the harassment of Jews in Labour. At his appearance, the DSA faithful burst out cheering for Jeremy Corbyn, an anti-Semitic bigot and terrorist supporter.

Rabbi Jonathan Sacks, the former Chief Rabbi, described Corbyn as an “existential threat” to British Jews, who gives “support to racists, terrorists and dealers of hate, who want to kill Jews and remove Israel from the map” and uses “the language of classic prewar European anti-Semitism.”

“Anti-Semitism has returned to mainland Europe within living memory of the Holocaust,” Rabbi Sacks warned.

This is the bigot whose name the DSA conference met with unrestrained applause on the same day that it voted to support BDS. Is it any wonder that the DSA has refused to condemn Estrada’s anti-Semitism or Salazar’s malicious smears of Jews?

The Labour speaker invited to the DSA conference was Marcus Barnett, who had cheered Venezuelan socialist dictator Nicolas Maduro. In addition to murdering protesters, seizing power and presiding over a country where there’s no drinking water, power or food, Maduro had at one point demanded that “the Jews that live in our lands” do something to stop Israel.

Also at the DSA convention was a representative from Melenchon’s France Insoumise. Melenchon’s blatant anti-Semitism, was so bad that it was even condemned by members of the DSA’s Jewish Caucus.

But instead of insisting that the DSA end its ties to an anti-Semitic movement, Lane Silberstein, a DSA and If Not Now member, weakly argued that, “Jewish socialists have had to contend with one of history’s most egregious eras of antisemitism— from which the left was not immune in promoting — and yet they continued to proudly identify as socialists… we will carry on that tradition and not shy away from working with the left.” The technical term for that is collaboration with anti-Semites.

Much as when D.C. Councilmember Trayon White accused the Jews of controlling the weather, the same leftist activists who rushed out to defend Salazar, Women’s March’s Sophie Ellman-Golan and If Not Now’s Rafael Shimunov, came to his defense. White makes frequent appearances in editions of the Washington Socialist, the house organ of the MDCDSA, which has been able to lobby the D.C. racist.

It’s not only Julia Salazar who fundamentally misrepresented her background. Salazar, like Ocasio-Cortez, is a bid at humanizing radical leftists and making their movements appear more approachable.

But what’s behind the scenes is an ugly alt-left.

The same year that Corbyn’s man showed up to be hailed by the DSA in Chicago, Bhaskar Sunkara, a former DSA vice chair and Jacobin Magazine publisher, ran a GoFundMe fundraiser to “Internationalize the DSA Convention”.

After the Julia Salazar scandal broke, Bhaskar Sunkara announced that he was so outraged by a Jewish magazine’s expose of the Socialist scammer that he would be donating to her campaign.

The Democratic Socialists of America attract anti-Semites for the same reason that Corbyn does. And, like Corbyn’s Labour, it ignores the problem, attacks Jewish critics and covers for its hateful allies.

The media has made much of the rise of socialism. But the rise of the DSA won’t just be dangerous for freedom and civil rights in this country. It will pose a threat to the safety and security of American Jews.

The DSA threatens to ‘Corbynize’ the Democrats into an anti-Semitic political movement.

Capitulation (and/or Political Correctness) is Not the Answer to Racism