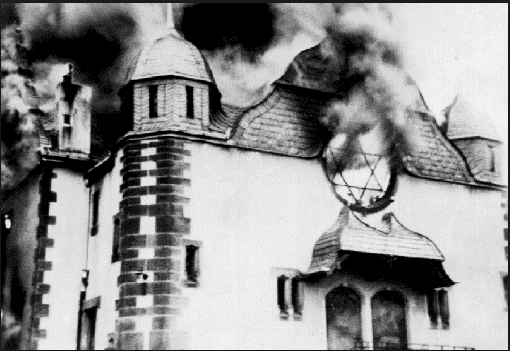 In the winter of last year, a dozen Muslims tried firebombing the 163-year-old Gothenburg Synagogue.

The attackers threw firebombs at the house of worship forcing dozens of Jewish teens to take refuge in the cellar while waiting for the police.

The synagogue was already protected by heavy concrete barricades and bulletproof doors. A frail Star of David hangs over the formidable stone building made more so by added barriers and defenses against terrorist attacks. A quarter of the membership fees for the congregants go to cover security costs.

Three years earlier, the Rabbi had received a threat in broken Swedish warning, “Soon will come the time when the Gothenburg synagogue will be destroyed to the ground with you inside, and then you too, you pig, will be killed in the eternal fire.”

The police only caught three of the attackers. All three were refugees, one from Syria and two others claimed to be, “Palestinians”. Instead of being sent to prison for arson, they were only convicted of vandalism. Two had residence permits while the third, a Gazan, had his asylum application denied.

The Muslim racist was supposed to have been deported and banned from returning until 2028. But a Swedish appeals court overturned his deportation because his “basic humanitarian rights” might be threatened by Israel since firebombing a synagogue “could be perceived as a threat to other Jews.”

“We have freedom of religion here in the country. This may not apply to the right of the Jews to practice their religion in their synagogue,” a 2004 article observed. A member of the congregation described reporting an attack to the police only to have them drop it due to “the absence of evidence”.

“There are no signs of increasing antisemitism in Sweden, say the police. Was this not how it started in the 1930s. In another country. In another Europe. Do we want to see it again?” the article asked.

Sweden is not the only European country to legalize Muslim synagogue burnings.

Earlier that same year, a German high court ruled that the attempted firebombing of the Bergisch Synagogue in Wuppertal was not anti-Semitic, but a protest against Israel. The three Muslim “Palestinian” attackers had been let off with a slap on the wrist and suspended sentences.

A lower court had ruled that “no anti-Semitic motivation could be identified in the arson committed by the defendants”, instead the Muslim terrorists were trying to draw “attention to the Gaza conflict”.

(And the Nazis were trying to “draw attention” to the death of a Nazi diplomat with Kristallnacht.)

Such decisions finding that hatred of Israel justifies violent attacks are not unusual in European courts.

In 2010, a British judge all but cheered on leftists who had smashed up a factory exporting components to Israel.

Judge George Bathurst-Norman compared Israel to Nazi Germany, and suggested that the leader of the vandals deserved a medal. “You may well think that hell on earth would not be an understatement of what the Gazans suffered in that time,” he had told the jury.

Last year, Saleh Ali, a Syrian Jihadist refugee, made headlines when he was caught on video smashing the windows of a kosher restaurant in Amsterdam. The police were also caught on video allowing him to smash HaCarmel’s windows without interfering.

He was back on the street in two days.

The court convicted him of vandalism and gave him a suspended sentence even though Ali had refused to answer the judge’s questions, and gave an interview in which he had declared that he did not regret his actions. He had also told officers that the attack on the Jewish restaurant was “only the first step”.

The court did not convict Ali of a hate crime. Nor did the authorities charge him with anything more than vandalism. The same vandalism that the police had done nothing to stop while it was happening.

The judge, like a number of lefty politicos in the Netherlands, instead blamed President Trump, but generously suggested that Trump’s recognition of Jerusalem was not the fault of the restaurant.

The HaCarmel restaurant was reportedly on the verge of shutting down after a series of attacks and threats including phone calls shouting, “Allahu Akbar”.

HaCarmel wasn’t located in a Muslim no-go zone. The Heineken Experience and the Van Gogh Museum are less than two miles away. If this is what it’s like in “the new place to be in Amsterdam Old South”, imagine what it’s like in less touristy areas where the police don’t show up at all when you call for help.

In November, it will be the 80th anniversary of Kristallnacht. In those dark days, Nazis smashed up Jewish synagogues and businesses. Like the attempted firebombing of the Bergisch Synagogue (also targeted by the Nazis) and the assault on the HaCarmel restaurant, the Nazi thugs claimed that they were acting in retaliation for Jewish atrocities: the assassination of a gay Nazi diplomat in Paris.

And, like the Nazi thugs, the Muslim thugs throwing firebombs at synagogues and smashing Jewish store windows, are acting with the covert sanction of the authorities, which offer them a slap on the wrist.

For the 75th anniversary, Berlin stores put plastic stickers on their windows to make them appear cracked. But who needs the illusion of smashed windows when for the 80th you can get the real thing?

A firebomb here and there. An assault or two a week. A store shuts down. And then another. There’s nothing as startling as the original Kristallnacht. No single day of massive violence to shock the conscience of the world. Instead an accumulation of incidents is shuttering Jewish businesses, turning synagogues into medieval fortresses and emptying European cities of their Jewish populations.

Without a single conglomeration of atrocities, there are only statistics, incidents and anecdotes.

You read one and then you move on.

The slow-motion Kristallnacht lacks the obvious endorsement of the authorities enjoyed by the Nazis. But the covert endorsements can be spotted in the actions of the police, prosecutors and judges who ignore crimes, fail to act, and even when acting, do as little as possible, in the rhetoric of judges who find every possible loophole and excuse for the Islamic thugs staging their very own Kristallnacht.

In November, the eightieth anniversary of Kristallnacht will dawn on a Europe where Jews are once targeted and on the run. This time there will be no populist leader to blame and no easy scapegoat. Instead the villains are who they were all along, not the scowling mustachioed men on the posters, but the officials and the bureaucrats who pretend to only be following orders, when they’re really the ones giving them. And the Islamic Kristallnacht doesn’t even require them to do either one. They just have to step aside, keep the borders open and then offer Muhammed an understanding wink in the dock.

Then they will nod and agree that anti-Semitism is a serious problem, but they have it under control. There will be photo ops at a march, an appearance at a synagogue, a condemnation and then more firebombings, murders and smashed windows as the slow-motion Kristallnacht continues.

“Death to the Jews” has a new slogan: “Refugees Welcome.”

Prager University: Craziness On the Streets of Santa Barbara