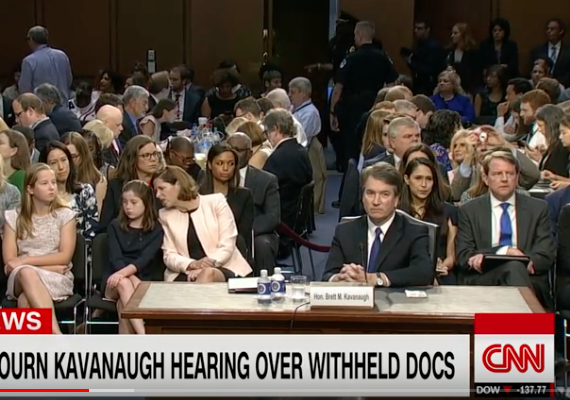 I spent most of Tuesday afternoon watching either video or live feed of the Kavanaugh confirmation hearings (the first day). Given the number of disruptions, outbursts, and hysteria coming from both the gallery as well as the minority party’s members on the committee, it could hardly be called routine, or something maintained with the normally expected decorum of the upper house of our Congress.

To his detriment, Charles Grassley, the chairman, failed to adequately control the proceedings. The original directive was that the members would be provided with ten-minute comment periods to open the hearings after which the introduction of Brett Kavanaugh would be made and then the justice-nominee would make his opening remarks.

Unfortunately, demands for delays and adjournments on the part of Democrats on the committee delayed the proceedings. Additionally, the speeches complaining over the number of documents that were not released, the late release of other documents, refusal of the chair to allow votes on motions to adjourn, the claim that Kavanaugh was deliberated given the nomination so that he could fight any effort to hold President Trump to the rule of law, all created needless delays as the speeches stretched to thirty minutes each before it was over late in the afternoon. Thus, my suggestion that Chairman Grassley being a failure when it comes to controlling the proceedings. My humble opinion based on what he said at the hearing, Chairman Grassley has reached the point where he should seriously consider retirement. His mind simply does not seem capable with keeping up with his mouth or his duties.

Back to the hearings. During the time I listened Brett Kavanaugh sat stoically while the Democrats trashed him, President Trump, and anyone who suggested he was a good nominee. Their claims ranged from the fact that he has not supported delays in his hearings so that Democrats can go back through documents that may have passed over his desk while serving in the Bush White House, to suggesting that his only reason for being there was to provide cover for President Trump in the event the issue of whether he can be indicted comes before the court. That is clearly one of the more insulting suggestions proffered by the minority this afternoon.

Another particularly obtuse suggestion was provided by a Democrat who suggested that a series of 72 cases over the past who knows how many years were all decided by a “Republican majority of five” on the Supreme Court. This must, of necessity assume that Justice Kennedy was included in the “five Republican votes” since there has not, in recent memory, been five Republican-appointed justices excluding Kennedy, on the Supreme Court. Given that Justice Kennedy sided with the progressive side of the court about as many times as the conservative side, it stands to reason that the 72 cases that were alleged to have been decided based on what was best for Republican Party financial supporters rather than the rule of law were cases that were relatively clear in their failure to pass constitutional muster or Justice Kennedy would not so consistently ruled with the conservative majority.

The bottom line of this hoopla will not be written until the hearings conclude on Friday, September 7, but between now and then it is certain that the Democrats are not concerned with anything other than ensuring that Kavanaugh does not get confirmed. Unfortunately for them, the vote count at present appears to be around 55 favorable vs. 45 unfavorable. Apparently, the minority is not completely committed to their pathetic effort to abuse and use the process to continue their 15+ month attack on the Trump Presidency and his effort to return our country to the rule of constitutional law.

Meanwhile, Judge Kavanaugh, I salute your willingness to serve in this capacity given the extremely ugly and misguided attempt to malign you in front of not only your parents and wife, but your teen-aged children as well. They are certainly getting a civics lesson that they would never receive in a progressive-dominated public school. Your restraint in sitting through today’s hearing is a tribute to your character. A lesser man might have thrown up his hands and walked out.

Hear YE Hear YE! According to Jake Tapper, The Golden Age of Journalism is Here