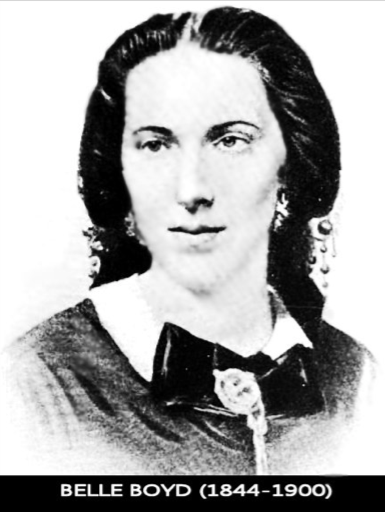 It has been fifty years since I first studied about this unusual Confederate spy and one hundred eighteen years since her death. I say unusual as hers is not a pro South, pro slavery story, in fact Belle Boyd opposed slavery. However she was an adventurer who grew up as a tom boy in Martinsburg, Virginia now West Virginia. She became loyal not to the Southern cause, but to avenge things done to her as a seventeen year old as well as her mother that caused her to kill a Union soldier, something she was exonerated for.

Historians and biographers have suspected much of the legend of Belle were fiction, based upon her own writing in prison and afterward. If she lived today she would likely by a columnist and blogger on the net as there were two things she was never short of: stories and opinions.

If Belle was guilty of romanticizing her stories it is because she herself was a romanticist. She became an amateur agent at age seventeen combining idealism and enthusiasm. She was never fully rewarded for her work for the South as unlike other spies she did not expect payment. It was enough to know she had a vital role in a cause.

Belle Boyd cannot be compared to the women spies of today as she was a loner. If a comparison had to be made it would be to one of the strong capable women portrayed in the Bond films. There have been comparisons of her with Mata Hari as both were writers of prose and poetry, incurred the jealousy of other women and were fine horsewomen. Both were tall adults, attracted to military uniforms and had commanding personalities. Her description was having a superb figure, an intellectual face and excellent taste in dressing.

Her methods of spying was to be a good listener and to mingle wherever Union officers might gather. In condescending attitudes these officers would assume a mere woman would not pick up or understand what plans they made and she gladly would pass the information on to Generals Jeb Stuart and Stonewall Jackson. Her information is said to have contributed to Jackson’s early victories in the Shenandoah Valley.

Belle was eventually caught and imprisoned. She complained about her treatment by Union officers, however she had the wits to stay alive. Spies were put to death for much less than what she had done. 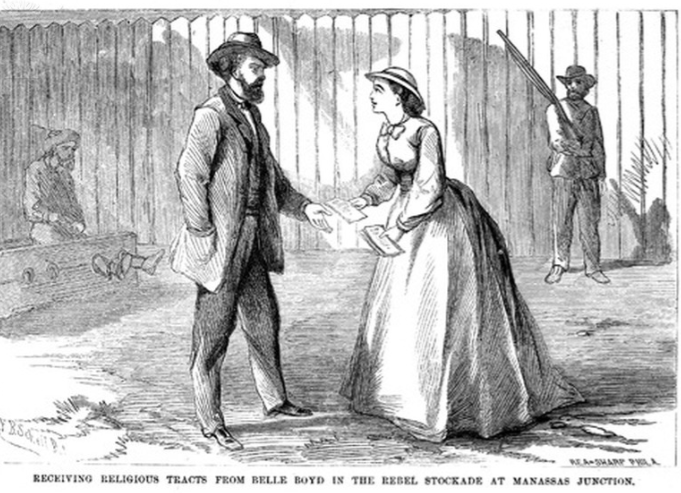 Despite Belle’s complaints about her treatment she fell in love with one of her captors, Lieutenant Samuel Hardinge and in Jane Austin style they were happily married for many years until his death. The couple had travels to Europe where Belle became an actress, public speaker and author. After her husband’s death she had too more marriages and her writing took a political slant that would today have had her sought as a columnist for his publication. She was a keen observer of events in Europe as well as in the United States and she had a fear for our nation in regard to things she might have predicted about today.

To Belle Boyd the assassination of Abraham Lincoln was something she believed would eventually lead to us becoming like the anarchy she saw growing in Europe and the end of our Democracy.

Belle wrote, “It has always been a boast of Americans were they Northerners or Southerners that theirs was the only history that could show the world a clear untarnished record of democratic/republican rule. But their annals can no longer be regarded; for in the sudden demise of of Mr. Lincoln by the bullet of an insensate fanatic, that peculiar institution of Europe, the school of assassins, has transferred to the shores of America. That country can no longer uphold her former boast, that crime such as this would never be perpetuated under a government commenced by George Washington.”

No longer could we claim superiority over Europe where nations were faced with anarchy and impending socialism.

At the time critics would have thought Belle Boyd as over reacting and not having real foresight of the future of our great nation. Even fifty years ago after the assassinations of the Kennedy brothers and Dr. Martin Luther King, Jr. I myself could not have visualized the real dangers that our nation would some day be faced with.

One has to wonder what Belle Boyd would be thinking in today’s United States. A time when we have divisions as deep as there were in 1860 and a president trying to restore our greatness despite threats to his very life. Would the rise of socialism in the Democratic Party have surprised her or the national violence we have seen.

In a way this writer thinks of PolitiChicks as the Belle Boyds of the present day. Trying to get the messages out to the public and supporting those whom they believe stand for liberty in our nation. After the Civil War Belle became a rebel of a different kind. One not supporting Southern states, but a spokesperson for real liberty.