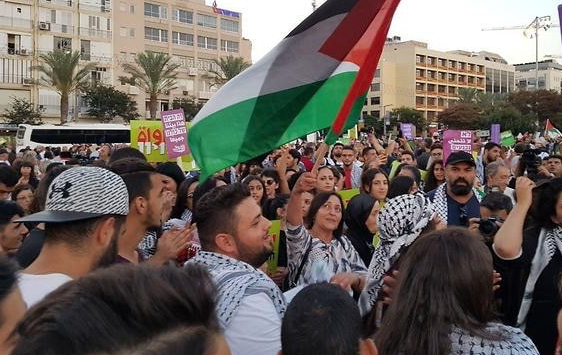 I have been critical of crazy far left, anti-Israel, activism in America, Britain, and Europe, but I have to admit the lunacy is alive and kicking – as well as killing – here in Israel as well.
Last weekend, we had a demonstration, in Yitzhak Rabin Square in Tel Aviv, by those that oppose the new Israel National State Law.
Rabin would have turned over in his grave had he witnessed what occurred in the square named in his honor.
There were the usual mix of far-left anarchists, Socialists, even Communists, political opportunists, and Knesset members, including Arab MKs who have an agenda to convert Israel from a Jewish State into a part of Greater Palestine.
This was evident by demonstrators, both Arab and Jews, provocatively flying Palestinian flags. In fact, there were more Palestinian flags than Israeli ones.
They were seeking, as one former MK, Issam Makhoul, put it, “an alternative to the current way of thinking in Israel.”
What could that alternative possibly be? 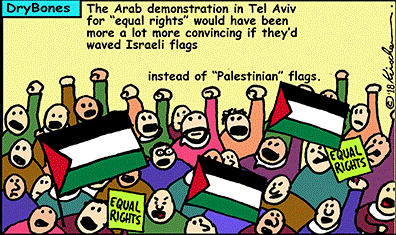 Israeli Prime Minister, Benjamin Netanyahu, summed it up precisely. Netanyahu posted on his Twitter page a video from the demonstration of a few protesters waving the Palestinian flag and chanting: “With spirit, with blood we shall redeem you, Palestine.”
Bibi wrote: “There is no better evidence of the Nationality Law’s necessity.”
Israel proved itself to be so democratic as to allow the flag held dear by the PLO, Hamas, and Palestinian Islamic Jihad who openly declare their intention to destroy us and kill as many Jews as possible, to be flown in the very heart of Israel’s free democracy.
And they condemn Israel for being anti-democratic!
Let’s see a similar demonstration in Ramallah by Israeli protesters demanding that Hebrew be adopted as an official language in any future Palestinian state.
Considering that both the PA under Abbas and Hamas in Gaza have declared that no Jew will be allowed to live in any Palestinian state – Good luck with that!
Barry Shaw lives in Israel and works for the Israel Institute for Strategic Studies. He is the author of ‘Fighting Hamas, BDS, and Anti-Semitism.’
Share
Facebook Twitter Pinterest Reddit Share via Email Print