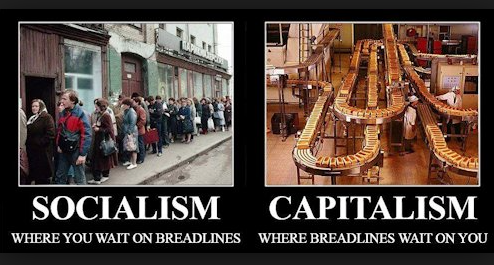 There are natural elements of “social ethics” in capitalism but these have nothing to do with socialism. If anything, although they have the same goal – to help the underprivileged and assist the disabled and poor – they approach this goal from a completely different end: the end which is the only long-term sustainable and enabling one. In other words, socialism gives you a fish at a time for a day or two, as the government deems proper – to everybody the same fish, no matter what they do or how hungry they are – whereas: capitalism teaches you how to fish.

Charities and foundations for the poor, great hospitals with superb state-of-the-art technology and care – those can only exist in capitalism because they are founded on care not mandated by the government but the care of the neighbor for the neighbor, out of love and happiness which is derived from such help. There is no happiness in socialist care, mandated by the government. Remember Confucius? “He who is given is gifted once, he who has given is gifted twice.” Think about it.

I recall Hayek writing that it is the most painful of feelings to watch how the socialist ideals aspiring to honest goals in helping humankind and direct them the right way wind up in the very opposite: destruction of liberty, personal freedom and happiness. Why? The person does not matter when what is good is directed from a governmental center. The apparatchik in the machinery of bureaucracy may have the best goals in mind, but no one single expert, no genius, not even the best of the best selected by some demagogue with a vision – can direct the economy and prosperity of a nation the way a market can do it on its own.

Free market and capitalist economy is the greatest superpower known to mankind. No super-computer we have developed can calculate, predict and plan – and regulate (!) – the way free market does. Will there be mistakes? Certainly, but the market has the ability to “equalize” itself. It will permit a company to grow only so long as the company provides the best services at the most economic level. The power of the company is not equal to its size. We are speaking about quality vs. quantity here. Once some centralized bureaucracy enters free market and begins to direct costs of goods, determining which company should survive and which should not, a vicious circle begins at the end of which there are no winners – though everyone may get a trophy for participation… That is what Hayek meant by his remark that it is very painful to watch the idealist socialists end with the very opposite they wanted: a dejected, unhappy crowd of grey people living in gray houses with their gray smiles leading miserable existence without purpose.

I may speak of companies, but companies are only people connected by a common purpose – to succeed, be the best on the market and produce value. Money is the by-product. The final product is personal happiness and satisfaction. Why does Charles Koch still work? It gives him pleasure and happiness. Government does not care for your personal happiness and satisfaction when it regulates the market. Here is how a capitalist shows someone longing for socialism what it is all about: it is a scene from Les Miserables many of you may recall (sometimes referred to as the “candlestick scene”): https://www.youtube.com/watch?v=wF3FX43F-7Y

I am also often reminded of how our country was born – from the visceral struggle of two groups. First, the Leiden separatists, whom we refer to as Pilgrim Fathers. These were the people longing to be free and unencumbered by the heavy hand of some merciless monarch who had no interest in their success and personal happiness. They were excessively taxed and prevented from practicing not just their religious beliefs but their respective trades and occupations. Thus, they moved to the country with the most flourishing, free market economy at the time, Holland, before venturing (and it was a common joint venture based on a contract) to found a separate colony here.

The second group followed suit. Those were the Puritans and we all know who they were and why they came. Protestantism became an indelible, inseparable fabric of the character of this new man, this – American! Many of them followed Calvin and did not find James I a just king – and justice never means fairness, but that is another matter.

Nothing was for free or freely given to them. They all had to struggle from day-to-day and fight for everything. As a result they had to “hang together” or else they would all “hang apart” – from the very start (yes, it was Ben Franklin, not Sam Adams or John Hancock who left us with the chopped up snake and the motto we should all stand by today). Looking back, some of us might view this “hanging together” as (to use a more modern term, popular in the 1980s Poland) “solidarity” and point out that the mutual support and cohesion wears nothing if not the cloak of “socialism.”

Alas, I say, read again. Proverbs 11:24: “A man may give freely, and still his wealth will be increased; and another may keep back more than is right, but only comes to be in need.” There goes another: “Those who give generously receive more, but those who are stingy with what is appropriate will grow needy.” Ibid. No government will come and give you brass candlesticks, but if you need one, your neighbor will be happy to help – provided that you do not take away his Bible and do not overtax his business to bankruptcy.

For you unbelievers – atheists – out there: the Bible is the key tome for Christians, Protestants, and many other denominations. I was brought up in a country which despised and scorned religion. I have never been taught how to pray. I was told religion was “an old wife’s tale.” When I first came to England (at the age of 17, after having also spent some time in a communist prison upon my arrest on the border, strip-search, cross-interrogation and that followed – see my book “Escape”) I was asked what religion I was. I could not answer and the instinct instilled in me was to respond that I was an “atheist.”

I said it proudly, the way I would have said it at school a year ago (a different response was impermissible and I would have been the butt-end of all the jokes of the class for years to come). To my astonishment, the circle of teenagers (and some parents) who surrounded me at this Plymouth soiree, gasped. Conversations ceased, even among the adults at the table. One could hear a needle drop. Did I say something bad? I blushed. “So you don’t believe in God?” a girl asked me. I shook my head. “What do you believe in then?” she asked. I bit my tongue, not knowing what to say. “Evolution?” They did not want to embarrass me – they were just curious. To them, I was like a strange animal imported from far away, the land they would never know. (Thank God!)

Dear atheists, do not disparage what you do not know. That is the quintessence of ignorance: pretending that you know what you do not know instead of asking what and why. You can always start by taking the Bible as a pretty fairy tale. Are fairy tales not all we need to point our children in the right direction? Is all that we need to know about distinguishing between Good and Evil not anchored in our fairy tales?

No, I am not diverging. Look up Max Weber’s “Protestant Ethic and the Spirit of Capitalism.” Capitalism and the ethic anchored in the religion on which our Nation is founded – merge in synergy. This merger results in what some can see as “elements of socialism.” Take away our religion, supplant it with atheism (or some ancient foreign doctrine of an eye-for-an-eye or the revengeful, unforgiving, merciless Quran) and you will take away our ethical and moral core! I do not need to go to church every day and pray in a pew in order to stand on firm moral ground, but I also cannot deny that religion and belief in God (albeit in my own way) has not contributed to my ethical wealth.

Every social system has its supporting religion. The religion of socialism is the state, its God is the Government. Make of it what you will, but do not confuse socialism and what democrats (mistakenly, albeit technically correctly) refer to as a “social democracy.” There is a difference between what is technically correct (that is transmitted in technical English to the initiated group of students at a political science course) and what is said and understood by the common man, who would not be able to define and distinguish between a “social democrat” and a “democratic socialist.” Why?

The democratic socialists took over the term “social democracy” (indeed, they kidnapped, hijacked it!) and have held it captive for so long that it has itself forgotten what it means. Western Europe is as much “socialist” as North Korea is capitalist or Iran is democratic. You cannot compare a parliamentarian multi-party democracy (please, drop the term “social” because it is misleading) and socialism. For that matter, you have to be very careful drawing parallels between this true multi-party democracy and our two-party system. Our system is unique, as is our country. Our Country is young and will never be as firmly rooted as an aristocracy, communism/socialism (totalitarian system) or hereditary monarchy.

We have evolved and overcome centralized Federalism during our birth and early years, why bring it back? Do you really want to change the Democrat Party to a Socialist Party? Well then, let us call it not social democracy or democratic socialism, because that is too confusing, but let’s call a spade a spade: Federalist Socialists, Centralist Socialists, Communists – pick up one. Of course, we will then have to change the name of the Republican Party to Democrat-Republican Party, better yet: Republican-Democrats, for we are all Democrats in the old Greek sense of the word. Why did I have to add that? Something tells me we have been there before…