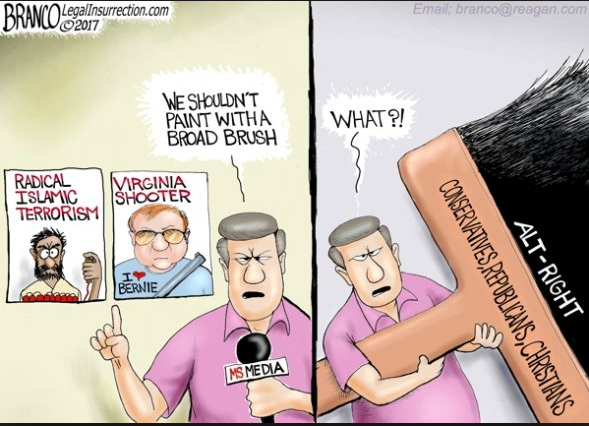 In the aftermath of the horrors of September 11, 2001, Americans came to many uncomfortable conclusions. As Radical Islam moved closer and closer to the grisly activities of that day, there were many signs of what we came to realize. That one of those conclusions was that radical Islam was at war with us, but we were not at war with them. Did it start with the first World Trade Center bombing in 1993, was it the embassy bombings in Kenya and Tanzania in 1998, or the attack on the U.S.S Cole in 2000? It may be hard to pinpoint just exactly when Islamists “declared war” on the US, but it became clear this was the case. Now, there appears to be a new group at war with America. And once again, we are not at war with them. That group is the Left. Some might categorize them as the “hard” Left, but let’s face it, it is the Left, Liberals, pick a name.

After every presidential election, the losing side must come to terms with the fact that they did indeed lose, and perhaps look at where they went wrong and figure out what and where they can improve. In 2016, that did not happen. Nothing remotely like it happened. The Left became angry and stayed angry. As Donald Trump has logged more and more successes, they become still angrier. We are now at a point where they condone violence against not just Trump supporters, but really anyone who disagrees with them. If you are not with them, you are against them and you must be shut down. You are a Nazi, you are a fascist, you are a fill-in-the-blank-aphobe. By any means necessary appears to be the working model of the Left, and they appear to be perfectly OK with that.

There is story upon story of people who wear Trump T-shirts and MAGA hats who are verbally and physically assaulted, cars and homes are vandalized, and Republican Congressmen are shot. California Congresswoman Maxine Waters has openly called for violence against those who not only work for the Trump administration, but average Americans who support the President. Call her crazy, but make no mistake, there are those who will listen. The Left can now be compared to radical Islam because they condone what amounts to domestic terrorism, the indoctrination of children, and a “convert or die” mentality.

The indoctrination of children through the public-school system has become increasingly blatant. The Left has clearly embraced that classic Saul Alinsky tactic of “get ‘em while they are young.” In a recent article on “The Federalist” website, Ilya Feoktistov uncovered a series of emails written by history teachers at a Boston area high school who conspired to resist a “call for objectivity” memo put out by the school’s Principal. This group of teachers are convinced that their job is not to teach history as it happened, but to teach high school students how to be social justice warriors. A disturbing quote from one of the teachers, “I am concerned that the call for ‘objectivity’ may just inadvertently become the most effective destructive weapon against social justice.”

Objectivity is a weapon? This is one school in one state. Let that sink in. Ask any conservative college student what they must do to get a decent grade in a class taught by a far-Left professor, and they will no doubt tell you that regurgitation of Liberal talking points keeps their GPA safely in the black. A 2016 Washington Times article points out the fact that the average ratio of Conservative to Liberal professors on college campuses is 12:1 Liberal.

When the issue of political violence comes up, the comeback line used most by Liberals is a knee jerk, “Both sides do it!”, or “Conservatives called Obama names too!” The answer to that should be an emphatic no.

Do any of these people think for a nanosecond that if Tea Party members were out roughing up Liberals that it would not be front page news and be covered breathlessly for at least twenty-four hours by CNN and MSNBC? Because it would be. Yes, there were some who claimed to be conservatives who did call Barack Obama some ugly names. Those who truly espouse Conservative ideas are not about name calling, they are about debating ideas and issues. They are willing to discuss those issues with anyone, anywhere, anytime in a civil environment. Anyone with an ounce of Conservative street cred is not in any way going to associate themselves or the Conservative movement with anyone who could think of no better argument than to call Obama names. Our arguments are so much better than that.

Because the Left did not get their way in 2016, they have decided to throw a giant temper tantrum. Their tantrum comes in the form of violence and shutting down those with whom they disagree, and they will accomplish this again, by any means necessary.

Currently, Donald Trump’s approval rating is at 49% according to a Rasmussen poll. If this trend continues, this number will go up, and the Left’s collective temper tantrum will get worse, and the things they will resort to will be more dangerous. What do Conservatives do to counter this onslaught? The answer of course is more voices not less. More speech not less. More of us willing to overcome our fears and continue to speak out about who we are and what we believe.

The Left must realize that we are not going away, that untruths about conservatism will not be believed no matter how many times they utter them. As Conservatives we must remember that the one thing that is like kryptonite to the Left is the truth.