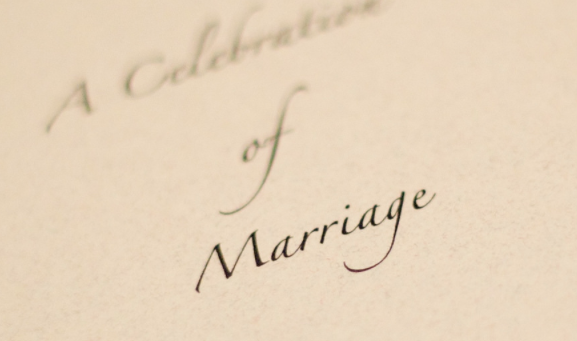 August 15, 2018 will mark the 50th anniversary of my marriage to my esteemed wife. In keeping with my longstanding practice, there will be no greeting card from me anywhere in evidence to mark the event. I detest greeting cards. I have always detested greeting cards. It seems to me that they give the opposite message from the one that is intended. It tells the recipient: “I couldn’t be bothered to take the time nor expend the effort to come up with an original thought about this important occasion, so I went to CVS and picked up this cheap card containing some canned thoughts written by someone who spends his days thinking up stuff to put in greeting cards.”

So, years ago, on the occasion of my esteemed wife’s birthday I did not get her a card, but instead wrote a letter to her in which I expressed my sentiments to mark the event. Her first reaction was:  “Did you forget, so you decided to write something on a piece of paper at the last second? Couldn’t you take the time to buy me a card?” In response I adopted my best hurt-puppy look and told her that I was trying to do something special instead of being trite and taking the easy way out. Her reaction was fabulous (from my vantage point). I evoked the best expression of guilt that I have ever successfully elicited from her before or since (despite repeated efforts on my part). However, all good things contain a downside. I had established a precedent that could not be reversed. The pressure has been intense ever since. Since that first time so many years ago, I have purchased no greeting cards. Instead, I have written a letter to her for every birthday and anniversary. These letters contain no extraordinary poetry. They are, by and large, nothing more than expressions of gratitude for the uncustomary lapse in clear thought that she experienced when she chose to marry me.

Today’s Orthodox Jewish wedding ceremonies follow a prescribed order. The most important part actually comes before the point when the man and woman come together under the wedding canopy. It occurs when the groom signs a “ketubah,” a marriage contract, written in Aramaic, in which he agrees to provide the bride with food, clothing and conjugal rights. It is a legal document that is signed by the groom and presented to the bride. The obligations flow from the groom to the bride, but not in the other direction. It is a one-sided obligation. It is a document in which the woman is provided all of the rights and the man undertakes all of the responsibilities. Typically, after the ketubah is signed (accompanied by much drinking of spiritous beverages, and repeated loud expressions of “l’chaim” — to life — from the assembled masses of men who are in witness), the groom is escorted by his male friends and family members into another room, where his bride is ensconced like a queen among members of her female court. The bride is veiled. The groom approaches her, lifts her veil to assure himself that she is indeed his intended bride (remember Jacob and Leah), replaces her veil, and is then danced out of the room by his increasingly raucous entourage (remember the toasts).

The bride and groom then join each other under a wedding canopy (symbolizing the home that they will build together), certain prayers are recited, the bride circles the groom seven times accompanied by her mother and her mother-in-law (symbolizing the protective wall that she will erect around her family), the groom slips a ring over the bride’s finger and recites the formula, “Behold, you are consecrated unto me according to the faith of Moses and the people of Israel.” There may be some fulminating by a rabbi, a cantor might do some singing, but by this point, they are already married. The ceremony is always ended when a glass is placed under the foot of the groom and he smashes it as a symbol that even in the happiest of times we must remember the destruction of the Temple in Jerusalem. At that point, the room erupts in shouts of “mazal tov” (good luck), and the festivities begin.

I have just provided you, dear readers, with a description of most contemporary Orthodox Jewish weddings. I am told that mine followed that formula. I am sure that it happened. Too many people have told me I was there, and it would have been difficult in those non-Photoshop days to fake the photographs with me in them. But from the moment when my father announced that it was time to get into the car to go to the synagogue, to the time when I found myself lifted in a chair by a bunch of my friends (who, by this time, were perilously in the proverbial bag), I remember not a single, solitary moment of it.

Since then, my esteemed wife has indeed erected a mighty wall of protection around our family. If I am attacked, her response is similar to that of a ferocious lioness, baring her teeth (and occasionally, using them). We are, in the words of Genesis, “one flesh.” That is the function of marriage, to make two individuals one unit. I recently came up with an analogy to describe a strong, healthy marriage. Each unit is a separate jigsaw piece. It makes no sense without the other. When they are fit together, they make sense. If each puzzle is shaped identically, they won’t lock together. The pieces must each be different, but they must fit together. A superb marriage is when each member completes the other. The truth is that I cannot imagine myself unmarried. Furthermore, I cannot imagine myself married to anyone other than my esteemed wife.

My esteemed wife and I are, in many ways, total opposites. But her strengths make up for my weaknesses, and vice versa. She is neither voluble nor anxious to appear in public. I, on the other hand, cannot shut up, nor can I be dragged off stage. A few years ago, when we first arrived in Charleston, we attended a large meeting. Each attendee was asked to stand and introduce him/herself. When our turn came, my wife stood up and said that in the (then) 44 years that we had been married she hadn’t done much in the way of speaking in public because, as my wife, she hadn’t been able to get a word in edgewise. It brought down the house.

One other absolute prerequisite to a successful marriage is the frequent sharing of laughter. Every morning when I wake up, I look at my wife and I say:  “I’m sorry,” just to get it out of the way.

As a result of my wife’s devastating wit, I have spent 50 years being totally skinned and filleted, and I have enjoyed every moment. One brief example: When my son was first married, we had dinner with him and his wife. My son began to tell to us with great pride how he had erected a shelf in their apartment, and that he had done it perfectly. I shook my head and tried to impart some marriage wisdom. “No,” I explained, “you should never do it perfectly. The first time that your mother asks me to do anything, I do it so badly that she never asks again.” At which point, without so much as a blink, my wife looked at my son and said: “…and that, David, is why you are an only child!” Game. Set. Match.

She has a rather bizarre sense of humor. She once asked me to prepare a sheaf of 3”x5” cards with a variety of interesting facts about me to make sure that conversation will flow smoothly when people come to visit her for the shiva (seven day period of intense mourning) after I shuffle off into the Great Beyond. I think that she was kidding. I’m not sure. The fact is that I pray every day that she will survive me because I don’t want to have to be the one to clean out the house!

About ten years ago, we received devastating news. My esteemed wife was diagnosed with ovarian cancer. If that doesn’t knock you on your butt, noting will. I debated whether or nor I should include that in this column, but I decided to do it for two reasons:  1) rather than putting an intense strain on our marriage, it pulled us together like nothing else had ever done; and 2) the way she has sailed through the past ten years (and continues in full sail) is proof positive of the truth of the aphorism, “attitude is everything.” Between the periods of chemo, the radiation, the surgeries, this could have sunk us. But because of her attitude, we both look at every day that we have together as an unparalleled blessing from the Almighty. We have learned that gratitude is a gift that never stops giving.

My esteemed wife is a retired, very distinguished lawyer, but she doesn’t make a big deal about it. She has survived over 10 years with one of the most devastating diseases that a woman can face, and she has done it with laughter. She is simply extraordinary. And the day that G-d blessed me with the privilege of marrying her 50 years ago, was the greatest day of my life. Please forgive the personal nature of this column. I just wanted to put it on the record.

And that, my esteemed wife, is this year’s letter.

Daniel Greenfield: Only Fake Jews Are Afraid of Jewish State