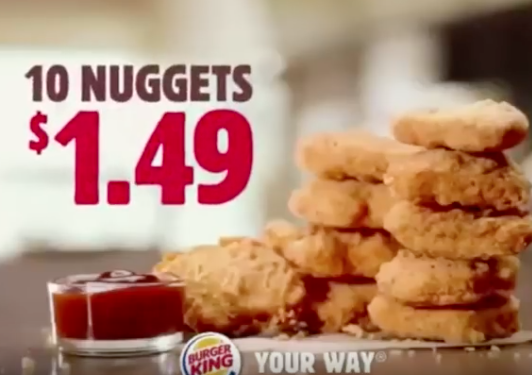 Lately, I am almost afraid to open a newsletter email or scan the headlines of any online news feed for fear that I will find out that the lunatics have completely taken over the asylum known as the United States of America and I will forever be confined to my narrow little street in Weston, WV, because if I leave I might trigger feelings of inadequacy by flaunting my six year old Ford Focus on the way to the local Wal-Mart.

Okay, perhaps that’s a bit of overkill, but not by much lately. Case in point…

Missouri’s Richmond School District came out with a new policy this week that has many locals and a lot of others up in arms. The district has notified parents that in the future, fast food may not be brought onto school campuses or consumed there.

Now the first thing that came to my mind was that this is a left-over vestige of Michelle Obama’s crusade for “wholesome” lunches and that the problem had to do with nutritional concerns. After all, we all are continually told that we need to pay attention to the calorie content of our foods. In fact, the federal government mandated that all fast food restaurants had to display the calorie content for all of their menu items so that people knew what they were getting. This became almost comically ridiculous when applied to local pizzerias because there are hundreds of combinations of toppings that impact the calorie count for any given pizza. But I digress.

This new policy being applied in Missouri became a focal point for a significant backlash from parents, and for good reason. First of all, this was, in their view, just another instance of government over-reach into the ability of parents to make parenting decisions about their children and what those kids were eating. Over the past few years, school districts have taken it upon themselves to make all kinds of decisions – whether menus, dress codes, speech restrictions, sex education, LGBT issues – that infringe on parental rights to an alarming degree. But wait…the reasoning behind this latest voyage into the absurd tops them all for sheer ludicrous reasoning in a ridiculously extreme version of political correctness only possible in an insanely left-wing dominated education system.

The policy that denies a busy parent from dropping off a fast food lunch for a kid for a special occasion, a forgotten bag lunch, or any other reason was solely implemented because…wait for it …. The desire of the school district to ensure “equity” because other students whose parents could not afford fast food lunches for their kids might be offended or the children of those needy parents would feel “left out” or stigmatized by a kid eating a happy meal in the same cafeteria. No joke. Nothing about nutrition, nothing about any other rational reasoning that might have otherwise justified such a restriction. Just political correctness run amok.

What is it going to take the bring some semblance of rational sanity back to our education systems? More importantly, when are we going to demand that our schools focus on academic subject matter and leave the social, moral, nutritional, health, immunization, and political matters to parents who know best how to deal with their children’s training in those areas?

At the rate we are going, the socialistic training schools that existed during the years of Stalin and the Soviet Union are not far away. It is not the government’s job to turn out homogenous cadres of cookie-cutter kids that think, act, and experience life in totally identical ways and all think like well-trained leftists. Presently, most of our country still believes that parents should be permitted to raise their own children without government interference. School leadership needs to stop trying to usurp parental authority through the elitist belief that they know better how to make everyone “more equal.”

“Students can’t be bussed to school, since those buses might stop in front of their houses and other students would see how rich their families are. All kids will be henceforth driven to class in school-issued 2003 Kia Rios so that nobody will seem any richer than anyone else.”

Yep, that’s just about how utterly stupid this policy gets. Why can’t we all wake up and accept the fact that “equal opportunity” is something that is best assured by getting an education and working hard, but there simply is no guarantee that everyone will come out of their life with equal results. That’s the insidious myth being pedaled by the progressive left. It needs to be stamped out where ever it pops up these days.