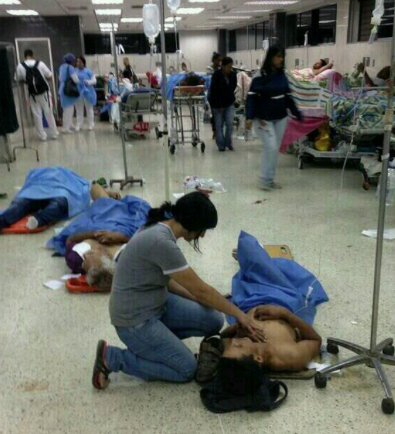 Venezuela’s capital Caracas, today: soldiers in black helmets, military fatigues and bulletproof jackets; a fleet of 400 police-soldier motorcycles sweeps through narrow, crumbling, streets followed by trucks with armed SWAT-like teams; helicopters hover above shining light on the poor dilapidated dwellings. Eyes full of fear peer through chinks in walls. Street checkpoints were set up. Snipers and men in fatigues move above from roof to roof as if they were strolling through a local park. Officers with heavy weaponry are scouring alleys looking for…

Allegedly, two criminals were on the run. Locals know better though. After years of socialist parades, intimidation, starvation into submission, terrors of modern democratic socialism under Maduro, they know that this OLP “exercise” is there to intimidate the common Venezuelan who might, after all, have another “coup” in mind.

The Operation Liberation and Protection, or OLP, began in July 2015. It is the country’s 23rd anti-crime initiative since President Hugo Chávez took office and launched his Bolivarian revolution in 1999. It is the third since his protegé, Maduro, began his term after Chávez died in 2013. Meanwhile, crime is on the rise, because people have nothing to eat, and – after the raids like the one described above which took place last week and during which over 120 homes belonging to common, mostly poor, Venezuelan people were razed to the ground – they have nowhere to live.

Being sick in Venezuela today is practically a death sentence. Blackouts last for weeks. People have nothing to eat or drink and very limited access to information. Drinking water is rationed and things like bread and toilet paper are available only on the black market. Basic care to people cannot be provided – not even in hospitals, because even basic instruments need electricity to function. However, if you openly defy Maduro and speak against the “regime,” your house will be raided, razed to the ground and you will be taken away never to be seen or heard from again.

If this sounds like Orwell to you or some science fiction more cruel than the Handmaid’s Tale, you are on the right track – only – it is reality. I experienced this reality myself when I visited Romania in 1987 when Ceausescu was in power. Will people ever learn…?

I am asking this question, because they had a choice. Nicolás Maduro has been the President of Venezuela since 14 April 2013, after winning the second presidential election after Chávez’s death, with 50.61% of the votes against the opposition’s candidate Henrique Capriles Radonski who had 49.12% of the votes. Prejudice and indoctrination won the elections. Perhaps, perhaps not – we will never know because the election was contested and the Supreme Court with all justices substituted by Maduro decreed in his favor.

Coincidentally, Radonski is a smart, educated, pro-capitalist entrepreneur who helped launched Kraft Foods in Venezuela and kept inviting western investment and enterprise. Unfortunately, he happens to be white and Jewish. Maduro won the elections with this motto: “Zionism, along with capitalism, are responsible for 90% of world poverty and imperialist wars.” [literal quote from Maduro’s campaign] “It is the evil imperialist, the fat cat capitalist that exploits the people and causes all our shortages!” yells Maduro from his opulent palace and goes to China for another $50bil money-for-oil loan. He is not starving – he is living in the lap of luxury! – and as long as other socialist “democrats” are supporting him, he will stay in power. Hamas and Palestine declared support for Maduro, as did Iranian supreme leader Khamenei.

What did our President Barack Hussein Obama do? In 2014, he declared Venezuela a “National Security Threat,” which was another “red line in the sand,” soon to be erased by the winds of common ideology. In 2015, after Maduro usurped total power, suspended the Constitution by declaring a “State of Emergency” and continues acting by decree (fiat) without approval of Assembly (Venezuelan one-house Congress) with complete power of Venezuelan police and military in his grasp, Obama lectured our youth about “bathroom policies” and Trump’s language and his girlfriends!

Finally, what Senator Sanders is proposing here is exactly from Maduro-Chavez playbook. Chavez was a full-blown Marxist, especially after the infamous coup against him in 2002, when his grasp on power tightened and his Marxist ideology took a new lease on life. In a 2009 speech to the national assembly, he said: “I am a Marxist to the same degree as the followers of the ideas of Jesus Christ (are Christians) and the liberator of America, Simon Bolivar (are Venezuelan).” No doubt, he was a Marxist to the same extent to which Maduro and Sanders are, but mixing in Simon Bolivar…? Bolivar was an educated pro-capitalist Enlightenment entrepreneur. Maduro is a bus drive without a high school diploma. What is even more appalling, Jesus Christ was not a power-hungry socialist spitting evil and executing those who disagreed with him!

Today, Venezuela follows what Chavez started. Among the initiated, it is referred to as “revisionist Marxism” and publicly touted as “democratic socialism.” Various attempts at overthrowing Chavez had only served to further radicalize him. In January 2005, he began openly proclaiming the ideology of “Socialism of the 21st Century.”

Socialism of the 21st Century is Marxist Revisionism, also known as “proletarian reformism,” familiar to us as “democratic socialism.” This is not “capitalism tempered by socialist compassion” (as Sanders and Clinton would have you believe), but socialism, which has realized it cannot exist without capitalism: China sponges on US, Venezuela leeches on China… “Don’t look the gift horse in the mouth, but whip him blind if he don’t move!” Excuse my French, but “president” Maduro is a bus driver without a high-school diploma. We need to use the language everyone will understand.

In conclusion, modern “Democratic Socialists” can either educate themselves, read Hayek, Orwell, Rand,… or they can go to Venezuela and try it out.

Tax Migration And The Blue Wave

McCarthy on CIA Director Brennan: "The Most Monumental Mismatch In The History of Nominations."