It was just another day in a city where Muslim terrorists had once thrown grenades into a synagogue during a Bar Mitzvah killing a woman who threw herself onto the grenade to save the children. The attack had taken place with the complicity of a government notorious for its friendliness to terrorism.

That’s impressive considering that the country only has around 9,000 Jews. There has been 1 anti-Semitic incident to every 18 Jews in Austria.

That same year, Germany had 1,453 anti-Semitic incidents to approximately 100,000 Jews.

In Bonn, Germany, a Jewish professor from Baltimore was assaulted by a Muslim yelling, “No Jew in Germany!” When the police arrived, they assaulted the professor. There was a protest march. A videotaped attack by a Syrian Muslim refugee in Berlin had led to another protest march and a slap on the wrist for the assailant. 10 Syrians attacked a man wearing a Star of David while screaming anti-Semitic slurs. A Jewish teen was assaulted in a Berlin train station. “I’ll slit your throat, you f***ing Jew.”

One statistical survey listed the number of anti-Semitic incidents in Germany rising by 60% in 2017.

Or of an area in the country.

While the vast majority of British Jews live in Greater London, there were 773 anti-Semitic incidents in London and 261 incidents in Manchester which is home to only 30,000 Jews. Manchester has a proportionately larger Muslim population and a smaller Jewish one. While a smaller Jewish population may make anti-Semitic Islamic attacks more challenging, it can also leave Jews more vulnerable.

And, most significantly, there is little covert or overt approval for Muslim anti-Semitic violence.

One place where that is not the case is the college campus. And so anti-Semitic incidents on campuses have actually doubled for two years in a row. The fact that anti-Semitism on campus is increasing faster than in the general society should be deeply troubling to Jewish organizations and the educational system. Yet the problem continues to be ignored for the same reason that it is ignored in Europe.

Just as in Austria, a small percentage of the Jewish population experiences a disproportionate number of anti-Semitic incidents. That’s what the college campus has in common with Hitler’s birthplace. 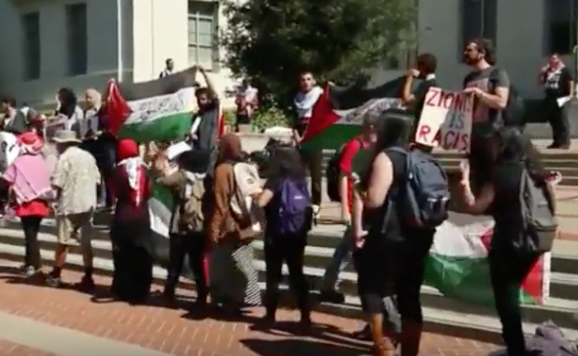 College campuses are unique because unlike most of the United States, they offer political sanction for anti-Semitism and for anti-Semitic political movements. Extremism thrives on modern campuses. Harassment of Jewish students by hate groups such as Students for Justice in Palestine is often covered up by their campus allies on the left. Debates over whether the attacks on Jewish facilities, cultural events, Holocaust commemorations and individual students are anti-Semitic or anti-Zionist cloud the issue. These are the same conditions under which anti-Semitism in Europe was nightmarishly reborn.

Campuses more closely resemble Europe than they do America. Like European countries, campuses have left-wing governments, are ruled by political correctness and ignore individual rights. When their growing Muslim populations collide with their large Jewish student populations, the outcome much more closely resembles European Jewish life than the way that American Jews expect life to be.

The campus is the canary in the coal mine. It’s where American Jews are beginning to experience a European style of anti-Semitism where the complicity of the authorities in the harassment perpetrated by a growing Muslim population and its left-wing allies leaves Jewish students uniquely vulnerable.

American anti-Semitism is taking off on campus, but it won’t stay there. School and college campuses are the places where a new generation learns what it means to be an adult member of society. The tolerance for campus anti-Semitism won’t remain an aberration. Instead a generation of students will carry those lessons into their workplaces, into the government and the private sector.

The administrators, managers, elected officials, judges and thinkers of tomorrow are being shaped on the campuses of today. Their experience will shape what life will be like for all of us decades from now.

A campus environment that normalizes anti-Semitism will turn life for American Jews into Europe.

Prager University: What Was the Cold War?