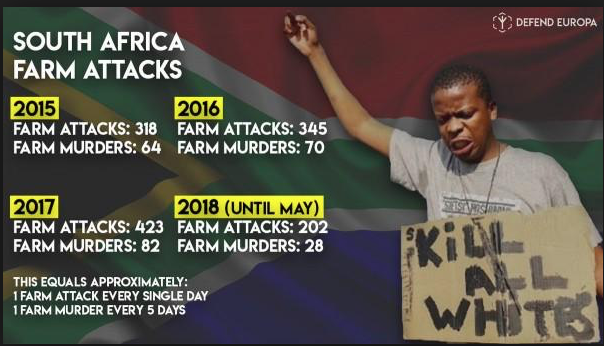 “Strongman politics are ascendant,” Barack Obama warned in South Africa. He spoke passionately about “the politics of fear and resentment” at the Mandela Lecture. He worried that we were entering a world, “where might makes right and politics is a hostile competition between tribes and races and religions.”

While the media used the remarks to attack Trump’s meeting with Putin, Obama had shared a stage with South African President Cyril Ramaphosa who had come to power promising to seize land from white farmers. Ramaphosa was the latest in a series of ANC strongmen, including his predecessor, an alleged rapist, beginning with the Communist terrorist whose legacy Obama was commemorating.

President Ramaphosa had vowed early on to seize land from white farmers without compensation. “The expropriation of land without compensation is envisaged as one of the measures that we will use to accelerate redistribution of land to black South Africans,” he had declared. And denied that such racist Communist tactics were unconstitutional. Now he’s moving to modify South Africa’s constitution.

“It has become pertinently clear that our people want the constitution to be more explicit about expropriation of land without compensation,” President Ramaphosa announced.

When your only rule is mob rule by ANC thugs, it doesn’t really matter what a piece of paper says.

“We will accelerate our land redistribution programme not only to redress a grave historical injustice, but also to bring more producers into the agricultural sector and to make more land available for cultivation,” Ramaphosa claimed in his State of the Nation address.

Zimbabwe had already made great strides in improving agriculture through land seizures.

Land was stolen from the farmers who knew how to work it and handed out to politically connected thugs. Soon the former “bread basket” of Southern Africa was starving. Black groups pleaded with the white farmers to remain. Rural Zimbabwe died. Hyperinflation made the currency worthless. A trillion dollars might not be enough to buy one egg. A former food exporter was forced to rely on food aid.

Ramaphosa’s rhetoric is an echo of one of Africa’s worst racist strongmen. Land seizures won’t bring South African land into “full use”, as he claims. It will mean productive land falling into the hands of ANC thugs who will be too corrupt, incompetent and greedy to do the hard work of working the land.

South Africa’s agricultural sector will go the way of Zimbabwe.

Cyril Ramaphosa is one of South Africa’s richest men and has an estimated net worth of $550 million. How did a socialist student activist make a mint? The answer is an inevitable as it is unsurprising.

South Africa’s agricultural sector has been steadily in decline. Farms used to provide millions of jobs. Now they offer less than a million. Wheat planting has fallen to a third. Cotton to a tenth. A country that once exported wheat, is now importing millions of tons while its agriculture sector fails.

The decline of South Africa’s agriculture has gone hand in hand with what it euphemistically calls its land reforms. White farmers have been murdered or driven off their land. But land seizures, legal and illegal, with compensation or with a hatchet, haven’t made South African agriculture more productive.

Instead South Africa is becoming increasingly dependent on agricultural imports to feed its people.

Like Zimbabwe, South Africa is due to revisit the same implacable economic consequences of land seizures that took the Soviet Union down the road to famine and terror. Toward its end, the USSR, despite possessing territories that had once bulged with rich harvests, had gone deep into debt to buy food from the United States. The African National Congress’ Communist roots are taking South Africa down the same path as its fallen Communist masters. And with the same miserable results.

Comrade Ramaphosa, as Comrade Mandela liked to call him, is less of a strongman, than a weak man. More afraid of thugs like Julius Malema and the greed of his ANC comrades than of dooming his people to hunger. The ANC is populated with thugs who are impatiently waiting to loot South Africa’s corpse. And they’ve grown tired of pretending that they are anything more than a failed state’s Marxist mob.

The constitutional gambit is a desperate attempt to legitimize racist mob violence and ANC corruption. It takes the constant assaults on white farmers and tries to disguise lawlessness under the color of law.

1 white farmer in South Africa has been murdered every 5 days. This ethnic cleansing has been going on with the same regular clockwork as the tributes to Nelson Mandela and his even more murderous wife. The racist violence, the murders, rapes and land seizures, the chants of, “Shoot the Boer” are backed by lies about a shadow white majority somehow still ruling South Africa even after all the years of ANC rule.

The media frequently repeats fake news statistics which claim that white farmers own 70% or more of the country’s farmland. The actual number is less than a quarter. Some of the best land in South Africa is already in black hands. And, just as in Zimbabwe, it hasn’t remedied the agricultural or social problems.

South Africa’s agricultural sector is already on its deathbed. Its corrupt economy is incapable of competing on the world stage. Its exports are not at issue, its ability to feed its own people is. Aggressive land seizures won’t do much more damage to South Africa’s economy, though it will discourage investors and drive out more white farmers, but will bring its society to its knees.

Meanwhile the plight of South Africa’s white farmers continues to be ignored. The ANC genocide has been slowly unfolding for a generation with the complicity of the same leftist leaders who covered up Communist genocides in the Soviet Union, Communist China and Cambodia. But this latest legitimization of land seizures by the ANC will only encourage a further outpouring of racist attacks on white farmers.

Australian Home Affairs Minister Peter Dutton has urged helping the persecuted white farmers of South Africa receive political asylum. But while every “persecuted” group is fast tracked for asylum, the door still remains shut for a productive population that has been targeted for economic ethnic cleansing.

In his State of the Nation speech, President Ramaphos declared, “We are building a country where a person’s prospects are determined by their own initiative and hard work, and not by the color of their skin, place of birth, gender, language or income of their parents.” Seizing land from people because of the color of their skin and giving it to those who haven’t worked for it is the opposite of that vision.

And yet it’s easy to see why Obama was so comfortable with a politician who could twist the language of equality to justify identity politics theft and the verbiage of tolerance to justify racial oppression.

South Africa, like the Soviet Union and Venezuela, like Cambodia and Cuba, is not just an atrocity, it’s a cautionary tale. Ideology, more than race, connects the scattered strands of the leftist killing fields. To pretend that what happened there cannot happen here would be ignoring the lessons of history.

And a new red famine is growing where the red blood of white farmers flows into the dying earth.

The Democrat Party’s War on America and Our Constitution: Part 3 of 4