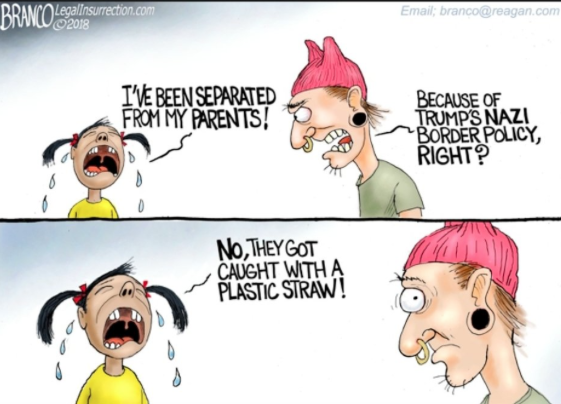 Here are a few things that are effectively legal in San Francisco: drugs, public defecation and shoplifting. And here are some of the things that are banned or will be banned in the City by the Bay.

If you can think of something, San Francisco has already banned it. Or will be banning it soon.

North Korea with a tech industry and some leftover Victorian architecture (which it’s banning tour buses from visiting) has reacted to the collapse of living conditions and fleeing tourists by banning everything.

Everything except the behavior that’s making San Francisco unlivable.

During the Gold Rush, legend had it that the streets of San Francisco were paved with gold. These days they’re layered with human waste after the socialist city legalized public urination and defecation. A bag of 20 pounds of human waste was deposited on the street. Urine corroded a pole so badly that it fell on a car almost killing the driver. But don’t think that you can get away with anything in San Francisco.

San Francisco decriminalized public defecation, but criminalized plastic straws. While bench warrants for public urination are discarded, the straw fines are real and expensive. A California statewide bill goes further with a threat of six months in the county jail for giving a man a straw. When drugs are legal and straws aren’t, the Mexican cartels will soon switch to smuggling drinking straws into California.

Why ban straws? Because straws, according to the San Francisco ordinance, “may threaten public health” and are bad for the environment? Piles of human waste in the street are great for public health and the environment. But a Chicago medical association disagreed and cancelled its planned conference.

When Chicago thinks your city is dirty and dangerous hellhole, you really have a problem.

But America’s greatest experiment with socialism is coping with its collapse by banning everything. The straw ban isn’t the last straw. It’s one of a series of San Fran bans that would make Kim Jong-un wince.

The straw ban was the brainchild of Supervisor Katy Tang. Katy was excused from the straw vote because she had to take her bar exam. She had previously won a proposal to ban sales of fur coats. In her press release, Katy noted that, “fur farming contributes to water and air pollution” because each mink produces “44 pounds of feces in the mink’s lifetime.”

The press release doesn’t state how many pounds the Board of Supervisors produces a year. Or how much the homeless population that San Francisco’s insane government has cultivated does.

Statistically speaking, Katy Tang would be personally responsible for around 342 pounds of waste a year. Or 7 times more than a mink could manage over its entire existence. The entire Board of Supervisors, which in true Stalinist style votes 11-0 on its insane bans (except when Katy has to take an exam), would directly account for around 3,700 pounds of waste. Or worse than an entire mink farm.

But that’s not accounting for the true legacy of the Board of Supervisors.

The homeless population of San Francisco increased by around 1,000 in six years. Complaints about human waste rose from 5,685 in 2011 to 18,211 in 2016. A 1,000 increase would mean an extra 342,000 pounds of human waste. San Francisco pols clamored that all the mink farms in this country produce a million pounds of waste a year. The homeless population that they cultivated does that in only a few months with an estimated annual output of well over 2 million pounds.

Mink are rabid, deranged animals that bite everything in sight. But millions of them running loose around Frisco would still do less damage than the San Francisco Board of Supervisors.

San Francisco’s budget topped $11 billion for the first time. An increase of almost a billion. Annual spending on the homeless is expected to rise to over $300 million.

None of this would be possible without the tech industry that the city is trying to alienate. And if North Korea with a tech industry loses the dot com firms that feed its tax base, it’ll just be North Korea.

And it’s working hard to make that happen.

Another brilliant ban from the board brains would outlaw new workplace cafeterias.

“You can’t have an industrial kitchen in your office building,” declared Supervisor Aaron Peskin, who along with Supervisor Ahsha Safai, was one of the geniuses behind the idea.

What’s the environmental impact of a straw or an employee taking an Uber for lunch? It’s as disproportionate as the environment impacts of Katy Tang, Aaron Peskin and Ahsha Safai compared to a thousand minks whose senseless aggression is at least the product of instinct, not leftist ideology.

But the great hand of socialism gives and takes away. It just doesn’t make any sense while it’s doing so.

Once the decree passes, the only people entitled to a free lunch in San Francisco will be the same ones defecating on the street. But the workers who actually subsidize the mess aren’t allowed a free lunch.

Socialism will offer you a free lunch. But not if you pay taxes and use the bathroom.

“I urge the Board to focus on making our streets safe. Perhaps then, workers would feel better about leaving their workplace for lunch without having to actively dodge tent camps, human feces, and needles,” one San Francisco letter writer suggested.

But that runs contrary to the entire philosophy that turned San Fran into an overtaxed and overregulated public sewer where every problem is solved with a new ban.

“It’s more heavily regulated than the water you’re getting in bottles,” a senior advisor to the mayor’s office insisted of San Francisco’s water in defense of a water bottle ban.

But not everybody wants more regulated water. Some people just want the water that they want.

And the vaping liquids, the goldfish, the upholstered furniture, the plastic bags, fur coats and coffee cups of their choice. Some people just want to drink their bottled water through a straw. They want to wear a fur coat while shopping for tropical fish and upholstered furniture. And then light up a cigarette.

There’s no room for that attitude in San Francisco where each social problem is met with a new ban.

Are restaurants unhappy about the bans on coffee cups, foam containers and straws? Just ban workplace cafeterias to drive customers to them. Are workers and companies fleeing San Fran? Put up a wall made of recycled waste and trash topped with armed homeless encampments to keep them from escaping. Then direct the survivors to eat out at the strawless, coffee-cup less, salt-less and sugar-free vegan restaurant of their mandated choice offering tasteless meals with no more than 40 calories.

It worked for North Korea. It’s bound to work for San Francisco.

Brandon Straka on the #WalkAway Campaign

Book Review: “The Case Against Impeaching Trump” by Alan Dershowitz