The Palestinian Authority’s basic law and draft constitution states that “Palestine” is an “Arab” entity, that “Islam is the official religion”, that “Islamic Sharia” is the basis for its law and Arabic is its official language. Unlike Israel’s nation-state bill which defines the Jewish State as Jewish, there’s been no criticism of this PLO document. And the media has not labeled it as divisive or controversial.

The constitution of neighboring Jordan states, “Islam is the religion of the State and Arabic is its official language.” “The people of Syria are part of the Arab nation,” Syria’s constitution declares. “The religion of the President of the Republic is Islam; Islamic jurisprudence shall be a major source of legislation”. That means Syria may only be ruled by a Muslim. “The official language of the state is Arabic.”

Egypt’s constitution declares it to be an “Arab Republic” and “part of the Muslim world”. You will not be surprised to learn that, “Islam is the religion of the state and Arabic is its official language. The principles of Islamic Sharia are the principle source of legislation.” These same statements, with minor variations, hold true for most of the Muslim countries in the region, and excluding Arabic, throughout the world.

All of Israel’s Arab Muslim neighbors very clearly define their countries as Arab and Muslim. Their religion is Islam, their identity Arabic, variations of the same document declare, their language is Arabic.

These assertions of Arab and Muslim national identity are not criticized by the same gaggle of organizations, governments and reporters tearing their hair out over Israel’s nation-state bill.

Qatar’s Ministry of Foreign Affairs denounced the bill as “racist”. The state sponsor of Islamic terror complained that, “human civilization tends to celebrate diversity”. Qatar’s own constitution declares that it is an Arab country whose “religion is Islam” and “Sharia law” is the basis for its laws.

So much for celebrating “diversity”. (But the Qatari constitution simultaneously claims that “its political system is democratic” and that “rule of the State is hereditary in the family of Al Thani.” The Qatari constitution also states that, “The Heir Apparent must be a Muslim of a Qatari Muslim Mother” and “there shall be no discrimination whatsoever on grounds of sex, race, language, or religion”.)

The Israeli nation-state bill speaks of the “cultural, historical and religious legacy of the Jewish people” and of Jewish “religious” self-determination, but unlike the Arab-Islamic constitutions it does not define Judaism as the official religion.

Virtually every media outlet described the nation-state bill as “controversial”. As everyone knows, the definition of a controversial issue is one that the left disagrees with. The Oslo Accords which killed and crippled thousands of Israelis and created an even greater threat to Israel’s existence than Iran’s nukes were described as “optimistic”. Dismantling Israel is “optimistic”. Believing in it is “controversial”.

But if Israel’s nation-state bill is controversial, then what of the PLO’s basic law, and the constitutions of Jordan, Egypt, Syria and nearly every Arab and Muslim country in the world? If Israel declaring itself to be Jewish is wrong, how can the Palestinian Authority, Egypt and Jordan declaring that they are Muslim and Arabic be right? The double standard is ubiquitous and has only one possible answer. 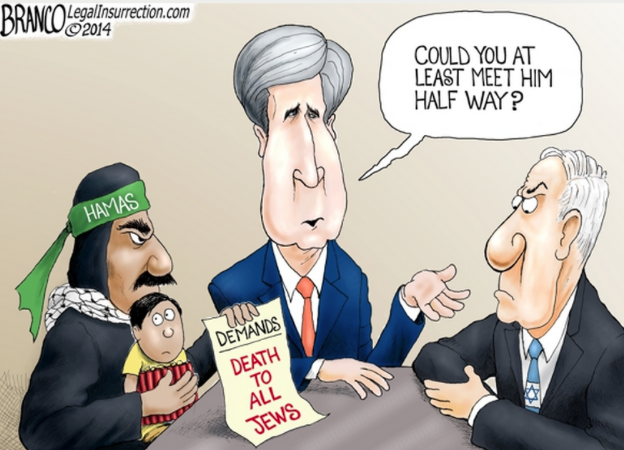 But this time the criticism isn’t coming from the State Department. Unlike the Obama era where an Israeli sneeze occasioned an angry lecture from Hillary Clinton or John Kerry, and a snippy remark by the State Department spokesperson, America’s first authentically pro-Israel administration is on Israel’s side. Heather Nauert at State has repeatedly deflected media demands that she condemn Israel.

In early July, Nauert responded to media insistence that BDS is a “peaceful movement” and that Israel should be criticized for denying entry to an anti-Israel activist by stating that, “countries are sovereign. They have a right to either admit or deny admittance to individuals at their border, okay?”

Instead much of the furious outrage is coming from lefty anti-Israel groups and leaders whose pretense of being pro-Israel wears particularly thin at times when Israel shows the courage of its convictions.

The American Jewish Committee could not find the time to stand up for Jewish students in New York City being disadvantaged by racial quotas, but did claim to be “deeply disappointed” by Israel calling itself a Jewish country. Perhaps then the AJC should get the “Jewish” part out of its own name.

Rick Jacobs, the anti-Israel leader of the Union for Reform Judaism, denounced the bill for damaging “the legitimacy of the Zionist vision” and “the values of the state of Israel”. He vowed to “fight back” by “forging new ties” with Arabs.

“Millions of us,” he declared, “are united in our opposition to this new law.”

Who those millions are is anybody’s guess. A rally against the bill in Tel Aviv sponsored by 22 organizations (including Socialist Struggle, the New Israel Fund and some pro-BDS groups) only turned out thousands. That’s in a city where you can get 100,000 to protest the price of cottage cheese.

“The law, which celebrates the fundamental Jewish nature of the state, raises significant questions about the government’s long-term commitment to its pluralistic identity,” Jonathan Greenblatt, the former Obama staffer turned ADL boss, complained.

Defining Israel as Jewish is a dividing line that separates authentically Jewish groups from those that are Jewish in name only. The National Council of Young Israel (NCYI), Zionist Organization of America (ZOA), and the Israeli-Jewish Congress (IJC) backed Israel. And other true Jewish organizations are joining them.

The scariest thing for a fake Jewish organization is a Jewish State. Establishment groups that have spent generations peddling lefty policy ideas to the clueless by calling them “Jewish” are deeply threatened by the existence of a Jewish State for whom the “J” part is not just a brand, but a meaningful identity.

Nothing threatens a scam artist like the real thing. And Israel, as idea and reality, has always threatened the scam artists of the left who peddle a bowdlerized Jewish history that began in the 19th century, whose messianic age is the Tikkun Olam of socialism and whose messiahs wave red flags.

Despite the clamor and the talking points, “controversial”, “divisive” and “unnecessary”, Israel’s nation-state bill is mostly symbolic. It doesn’t discriminate. It does however make a very clear statement.

And it’s that statement that has blown like a fierce desert wind through the houses of cards of an establishment that views Jewishness as a brand rather than a commitment. It is easy to find Jewish organizations that will sign letters for every lefty cause, from Muslim immigration to illegal migrants. But rarely, if ever, will these organizations stand up for a Jewish cause, even if, like the racial quotas being imposed on Jewish students in New York, the cause has absolutely nothing to do with Israel.

Israel, the “Palestinians”, the two-state solution and all the rest of it was never the issue. Jewishness is. The only people who are afraid of a Jewish State either hate Jews or hate being Jewish.

Half A Century! (A Celebration of Marriage)