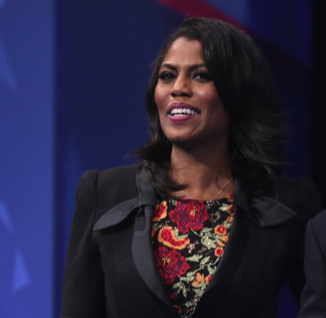 A parody tweet featuring a faked except from Michael Wolff’s Fire and Fury book created the Gorilla Channel meme as media types quickly fell for the idea that President Trump spent 17 hours a day watching an imaginary cable channel where gorillas fight each other.

A Simon and Schuster subsidiary paid Omarosa Manigault a reported seven figures for a book in which she claims that Trump wanted to take his oath of office on a copy of The Art of the Deal instead of the bible. The source of the story appears not to be Trump, but a popular Trump impersonator.

Someone should have noticed that. But when fake news meets fake books, there’s no time to check the stories that are too good not to print. The seemingly endless appetite of lefties for Trump bashing touched off a gold rush in the media and its allied publishing companies to mint new bestsellers.

Unhinged, the Omarosa book in question, was apparently sold in July and published in August.

That’s a ridiculously quick turnaround that would have made any serious fact checking impossible. Nor, apparently, was any serious fact-checking attempted, according to subjects like Frank Luntz and George Conway, who are named in the claims that she makes about President Trump using racial slurs.

Simon and Schuster is a subsidiary of CBS. The entanglement between fake books and fake news is a phenomenon that pervades the various sectors of the media as reporters write and report on books.

Simon and Schuster, like many other publishers, has been cashing in on Trump Derangement Syndrome. Samples include Bob Woodward’s ‘FEAR: Trump in the White House’ to be published on 9/11, ‘It’s Even Worse Than You Think: What the Trump Administration Is Doing to America’, a book whose title just doesn’t know when to stop, and Michael Ian Black’s ‘A Child’s First Book of Trump’. “The beasty is called an American Trump/Its skin is bright orange, its figure is plump,” Black clumsily rhymes.

Simon and Schuster had also published Hillary Clinton’s ‘What Happened’.

Woodward’s FEAR is an obvious answer to the success of Wolff’s Fire and Fury. Both are similarly themed pseudo-journalistic insider accounts. Book sized volumes of the type of fake news that have made lots of money for Bezos’ Washington Post and Sulzberger’s New York Times.

FEAR comes out in September. Before Woodward’s FEAR, though there was more fear at Simon and Schuster with the July release of The Monarchy of Fear by Martha C. Nussbaum. But the pop philosophy attack on Trump misfired. And the two S’s had a hole in August between Monarchy of Fear and FEAR.

So the publishing giant quickly signed a deal with Omarosa and filled its August hole with her crazy claims. Like Fire and Fury, and FEAR, Unhinged plugs into the fake news cycle. Even as the Manafort trial is petering out, leading to snide media attacks on Judge Ellis for restraining the prosecution’s antics and denying them the show trial that their ratings and Chartbeat graphs so badly needed, Unhinged arrived.

The titled of Unhinged could easily refer to Omarosa and the bizarre claims that a major publishing house decided to pay her seven figures for. Aside from the quest for a tape of Trump’s racial slur (Omarosa had spent enough time around media lefties to know that even hinting at the existence of such a thing would unleash a feeding frenzy that would make sharks chasing bloody meat seem sedate), and the suggestion that Trump wanted to take his oath on The Art of the Deal, there’s her claim that Melania uses her fashion choices to “punish” her husband. That’s yet another media conspiracy theory.

Unhinged really isn’t a crazy book. It’s a deeply cynical one. It takes media conspiracy theories and feeds them right back into the media. Omarosa was flushing fake news into the media’s fake news sewer. Omarosa cashed a seven figure check by giving lefty conspiracy theories, no matter how bizarre, the stamp of approval of having an ‘insider’ in the Trump White House tell them their beliefs are really true.

That’s why Simon and Schuster signed the deal and made Unhinged its August anti-Trump pick. Unhinged is unhinged nonsense. But what’s better for fake news than a fake book?

And why shouldn’t Omarosa work the same side of the street as Michael Wolff? Despite his journalistic credentials, Wolff’s narrative was full of holes, his claims dubious and his credibility shot. Fire and Fury contains an admission early on that the book is probably full of lies, but blames those lies on Trump associates. When he tried to extend his 15 minutes by using the same strategy to accuse Nikki Haley of having an affair with Trump, while blaming her for his own implication, even the media turned on him.

And then stopped inviting him on.

Omarosa is working her way through the Wolff slime trial, making dubious claims, invoking a journalistic journey, contradicting herself, blaming the contradictions on everyone else and distorting the events that she supposedly witnessed to make bizarre and inflammatory claims about President Trump.

Meanwhile she keeps dropping illegally recorded tapes that only address her own egotistical careerism.

And that’s where the misfire began.

Instead of getting a #1 bestseller, Simon and Schuster had to settle for #5. As CNN notes, even Rick Wilson’s anti-Trump rant made it to #2. Pro-Trump books by Jeanine Pirro and Gregg Jarrett got to #1. And that’s despite the millions of dollars in free media coverage lavished on Unhinged.

Without the backlash from the White House, Omarosa might not have even gotten to #5.

What went wrong with Simon and Schuster’s seven figure investment?

Unhinged is a self-serving book. Omarosa’s tapes were her big ticket item but they’re there to back up her own narrative of being unfairly fired. The left-baiting claims are just the chocolate coating for the creamy center of her own careerism. And in her past, she had alienated the media badly enough that plenty of big media talking heads were eager to pounce. Not all were as hysterical as April Ryan, who dubbed Omarosa “evil”, but no one in the media was willing to give her the benefit of the doubt.

Instead the media has been unhelpfully calling Omarosa out on the contradictions in her story.

The media isn’t investing too much in Omarosa. But like Wolff, she feeds the fake news media cycle, doling out the material that the media will amplify in its daily hysterical coverage for a Democrat demographic that is obsessed with Trump and has even less selectivity about what it consumes.

Simon and Schuster’s August anti-Trump bid appears to have misfired. The publishing giant is no doubt hoping that the misfire had more to do with Omarosa’s personal qualities than the end of the gold rush.

Bob Bender, a Simon and Schuster VP, predicted back in May that the Trump rush in publishing is about to fade. “Nobody’s going to do that for the second year—assuming there is a second year.”

If Bob Woodward’s FEAR misfires, then the era of fake books may be fading. And that’s bad news for fake news. Both fake news and fake books were a media gold rush fed by Trump Derangement Syndrome. But the golden age of Trump bashing may be ending. And then the soaring sales of the Washington Post and the New York Times, not to mention the few reporters still writing political books who weren’t named in #MeToo scandals, will crash down to earth as the golden age dies.

Omarosa’s Unhinged may be the fake book that broke the fake publishing camel’s back.

Socialism: Are We There Yet?