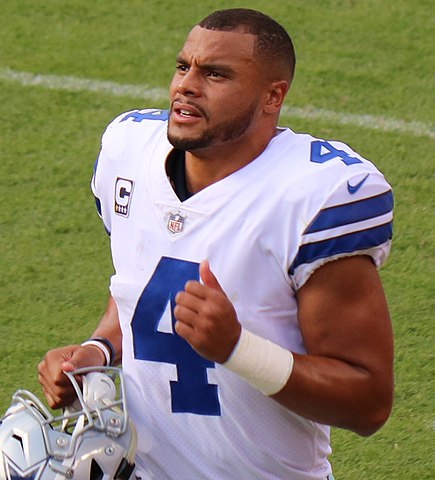 The NFL season hasn’t even started yet and already Dak Prescott, quarterback for the Dallas Cowboys, is facing withering criticism. For what you might ask? Is his performance in training camp dismal? Is he yelling at other players and hurting their fragile egos? No. He has simply stated that he will STAND for the National Anthem. Oh no! Lock him up!

Do you know how wonderful it is to hear that? This is EXACTLY the feeling NFL fans have had for a long time now. Just play the game and let us enjoy it without having to worry about politics for a few hours. Prescott gets it. Goodell doesn’t, many players don’t, and several owners don’t. And if they continue on their present course the NFL is going to reap what they have sown. Vince McMahon and the XFL are waiting in the wings for 2020.

Prescott continued:“It’s just important for me to go out there, hand over my heart, represent our country and just be thankful and not take anything I’ve been given and my freedom for granted.”

This will REALLY make the left mad. Being thankful for America is like showing a cross to a vampire.

“For me, I’m all about making a change and making a difference, and I think this whole kneeling and all of that was just about raising awareness and the fact that we’re still talking about social injustice years later, I think we’ve gotten to that point. I think we’ve proved, we know the social injustice, I’m up for taking the next step whatever the next step may be for action and not just kneeling. I’ve always believed standing up for what I believe in, and that’s what I’m going to continue to do.”

Prescott is advocating something really “radical”. Now that you’ve protested and called attention to injustice why don’t you take the next logical step and put your money where your knee is? Ahhhh but there’s the thing. Without realizing it, Prescott is exposing the hypocrisy of the left. Why if they were actually successful in bringing about positive change then the protest leaders would become irrelevant (I’m talking about the ones who are pulling the strings, not the average person who really desires to address the issue). This is why you still have race baiters like Sharpton saying stupid things over the years about Republicans wanting to take us back to the 1800’s etc. Of course there are many blacks who HAVE gone back to that period in the mental slave plantation of their mind. They are not free to say what they feel and when someone like Prescott does they are immediately attacked. Case in point, comedian DL Hughley, who took to the airwaves to attack Prescott:

“Let’s see in about 12 years when your brains are scrambled and you’re a big dude who is addicted to drugs, or addicted to painkillers and you don’t remember your name and you have an episode in the middle of a restaurant or in your home and the police come and don’t remember who you are. Black men and people of color do not get to enjoy peace.”

Really??? I know a lot of black people who are living happy, enjoyable and peaceful lives. Hughley obviously isn’t though. And isn’t it interesting that he “assumes” that Prescott will become a drug addict.

That’s right Prescott. Go to the back of the bus and keep your mouth shut, boy. That’s what he’s saying. What blatant racism. If a white person said that about a black person the media would crucify them. But Hughley knows he can get away with it because he is black and liberal. And he’s a coward. He is the one who is speaking for the “master”, his leftist Hollywood masters . Sadly he is still imprisoned on the mental plantation Kanye West was talking about. Prescott is free. Hughley is not.

Hey, at least he HAS an endorsement. Do you? Btw, who is Tahir Whitehead?

To this point, Dak Prescott has stood tall in the saddle and refuses to back down from the liberal onslaught:

“I made my statements. I stand by what I said. Some people may have misunderstood or whatever, but I know what I said, and I feel strongly about what I said. It is what it is.”

Uh oh. Sounds like Prescott is an independent thinker. And that will drive the radical leftist masters crazy.