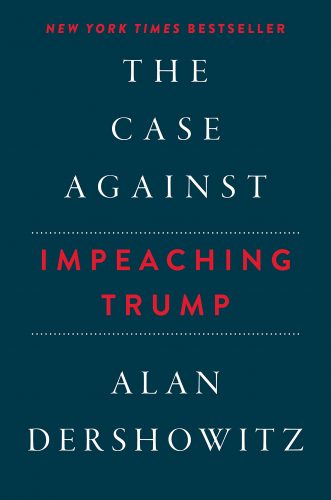 Update: President Trump has hired Alan Dershowitz as part of his impeachment legal team. He will make oral arguments against impeachment during the Senate trial. He laid out these arguments in the book I reviewed back in the summer of 2018.

In this time where the left continually hurls charges such as “treason” and “impeachment” at Donald Trump, it is rare to find a liberal who puts the rule of law over politics. But Alan Dershowitz is one such liberal. His new book, “The Case Against Impeaching Trump”, is a very informative read by one of the nations brilliant lawyers. Not only does he systematically lay out the case that the current climate of impeachment against Trump is based not on Constitutional debate but partisan politics, it is also a very educational read on the law in general as it relates to Presidential executive powers. And Mr. Dershowitz has been consistent over many years in his views on the law regardless of which party occupied the White House.

His stated purpose of the book :“I hope this book will provoke debate, not name-calling. The issues I raise are serious and their discussions is essential to democratic discourse, So please respond to my positions. Disagree with me; propose better arguments; defeat me, if you can, in the marketplace of ideas.”

The book is a reprint of articles he has written and transcripts from appearances he has made on several news shows. Each chapter is short and easy to read and understand without lawyer speak that is overwhelming. The first section of the book is a robust discussion on the Constitution and what is and is not grounds for impeachment. This lays the groundwork for the specific case of whether there are grounds for impeaching President Trump. Mr. Dershowitz discusses many of the topics surrounding the Mueller investigation and the talk of impeachment. Some of the issues he raises in the book:

Obstruction of Justice (in firing FBI Director James Comey): “A president can be charged with obstruction of justice for criminal acts that are NOT part of his constitutionally authorized powers. A president may not, however, be charged for firing an executive official, telling law enforcement who to prosecute, or pardoning someone.”

“Article II of the Constitution explicitly allocated to the president the authority to ‘take care that the Laws be faithfully exercised. This grant of power authorizes the president to decide who should be investigated and prosecuted and who should not. Presidents including John Adams, Thomas Jefferson, Abraham Lincoln, Franklin Roosevelt, John Kennedy and Barack Obama have exercised this authority by instructing the Justice Department to investigate and prosecute individuals or groups-and not to investigate or prosecute others. Some have exercised that authority wisely, others not. But none have committed the crime of obstruction of justice by trying to influence prosecutorial decisions.

Collusion with the Russians: “Even if were to turn out that the Trump campaign collaborated, colluded, or cooperated with the Russian agents, that alone would not be a crime, unless the campaign asked them or helped them to commit criminal acts such as hacking.”

On Michael Cohen: “There is an epic battle for the soul, cooperation, and testimony of Donald Trump’s lawyer, Michael Cohen, whose office was recently searched by federal authorities. Under current law, prosecutors can threaten Cohen with life imprisonment unless he cooperates with them. Prosecutors have been known to threaten parents, siblings, spouses and even children unless the recalcitrant witness agrees to testify for the government. Not surprisingly these threats often work. Not only do they get flipped witnesses to ‘sing’ they often get them to ‘compose’, that is to embellish, elaborate or even make up incriminating stories.”

Mr. Dershowitz’s prediction on how it will all end: “The investigation will probably not end quickly, but it may end with not a thunderclap, but several whimpers.”

Dershowitz also makes an interesting appeal to separate the job functions of the Justice Department:

“President Trump is criticized for demanding loyalty from Attorney General Jeff Sessions, yet I point out that every previous president has expected the same. The blame should be shared by our system that merges the role of attorney general as both the political adviser to the president and head law enforcement officer and chief prosecutor of the United States. These conflicting loyalties and obligations are the very reason our country appoints special counsel and independent prosecutors. I have long proposed that the Justice Department be broken up into two separate agencies, with separate heads: one a loyal political adviser to the president and a member of the cabinet, the other completely independent and not a member of the cabinet.”

“We have to have one standard of justice for all and we have to use the criminal law only as a last resort when there is clear evidence that an existing statutory crime has been committed. I don’t think that standard has been met for anybody involved in this whole disaster-the 2016 election.”

Mr. Dershowitz concludes his book with the following plea and invitation:

“I welcome criticism of my views on their merits and demerits, but I am appalled at the personal ad hominem attacks that have often substituted for critical analysis of my positions. The emails that I receive hourly from cranks and extremists don’t surprise me. What does surprise me is that so many serious academics and pundits prefer to attack my motives than to criticize my analysis in a reasoned way. Fair-weather civil libertarians who defend only the civil liberties of those whose ideology they favor are intolerant of nonpartisan defenders of the civil liberties of their ideological opponents. It may be understandable, if still wrong, when immature college students demand ‘safe spaces’ to protect them from views that offend them, but more is expected of mature adults who should be willing to engage with those who express principled positions with which they strongly disagree.”

In my opinion his most chilling quote is this:

“Remember that prosecutorial tactics used today against President Trump may tomorrow be used against Democrats – and even against you.”

For those who desire a non-partisan and thoughtful discourse on the issue of impeachment, “The Case Against Impeaching Trump” is a highly educational read. I highly recommend it.

Sherlock Holmes and The Want of a Nail Case