“We play it the way the air is in America today. The air is slightly static, see.”
-Jimi Hendrix discussing his interpretation of the Star Spangled Banner, August 1969

49 years later, Jimi Hendrix’s statement about his version of our National Anthem is a reflection of our time. For the air is static once again in America. We are in the midst of a darkening chaos as a people.

Make no mistake, we are in trouble and we need to change gears.

Now, the average pundit and media maven would blame the 2016 election and further actions of President Donald J. Trump as being the current cause of this cretinous uprising of voices. Another strata of society would blame the historic maladministration of former President Obama as the cause of our divisions. Those pigeonholes are about as descriptive as dry toast.

Sorry folks, but I have never blamed any President of the United States for my bad behavior. My actions and words are my responsibility and mine alone. To quote the character of the Captain that Actor Strother Martin played in the 1967 film Cool Hand Luke: “What we’ve got here is failure to communicate.”

As I have written previously, we no longer talk to each other, we talk at each other. Active listening is non-existent and is as useful as Van Gogh’s cut-off ear to the many that are raising their voices. That is why some aspects of technology lead me cold. Texting? I would rather write. Social media divides people into closed herds, if you let it rule you. Opinions are many. Dissenting conversations based on fact, few.

When we are divided as a people it is the most opportune time for the deep state to conquer us. There is a troubling tendency by extreme factions to silence someone whose experience or point of view varies from their own. The fact that many members of Congress and the media encourage the public to engage in violent bullying behavior borders on insurrection and demonstrates a commitment to planned chaos.

Time to take a breath, a real breath, an informed breath.

It is the manifested divisions among us that is promoted by the mockingbird state media. That is fueled by the funding from NWO globalists that has lead to the increase of such violent groups as Antifa. That first, confused, raised fist is the next failure of humanity.

These thoughts lead me to remember the words of the song, “Wonderful Remark,” as written by Van Morrison. They read in part:

How can you stand the silence that pervades when we all cry?
How can you watch the violence that erupts before your eyes?

The agenda of the deep state of America is quite simple, divide the people and steal them blind. In regards to the same deep state’s service to the people, they do the least and than blame the other side. We need to stop being manipulated by these pathetic traitors and their insipid partners, the media. Time to practice cognitive thinking and stop reacting with our ego laden flesh. We should not have to watch the paid for violence that erupts before our eyes. 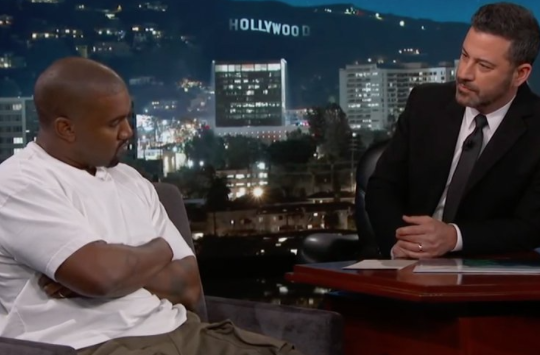 Recently, I was encouraged by an interview that I saw between Rapper Kanye West and talk show host, Jimmy Kimmel. Now, I am not a huge fan of Kanye West’s music. I am an old school Blues and Soul musician/fan. However, I was incredibly impressed by the transformation in West’s conversational style and his support of our President.

West talked about the fact that he was wearing a President Trump “Make America Great Again” hat and he was not going to be controlled by the fear of reprisals. He eloquently stated the following statement: “Liberals can’t bully me. News can’t bully me. The hip-hop community-they can’t bully me.”

But the best part of the interview was when Kanye West stated,

The main thing that I was stressing was the idea of trying love. You know we’re always, you know, pushing out so much hate and love can cure so much. Just to think, am I moving in love? Is this out of love? Not out of pride. Pride is a word that people often say in a positive connotation, but it is actually one of the seven deadly sins.

Perhaps, that is an example that we need to embrace. To have enough self awareness and confidence that we do not allow ourselves to be bullied by someone’s disagreement with our position. And that we do not return the bullying because we disagree with someone else’s opinion.

We need to be aware of the power behind the forces of our divisions. We need to consider turning down the heat of the nuclear hate that keeps us fighting and not paying attention to the real enemies of the state. If we operate with love, compassion, consideration and understanding, we will no longer be controlled by the anger and the angry. I want truth, justice and safety. Ultimately, compassion outweighs intellect, ego and the human flesh.

Transformation can come in many forms, but love is the principle behind real change.

Is Capitalism Compatible with Socialism?