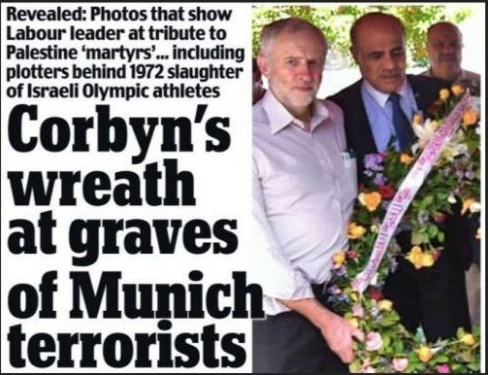 British Labour leader and potential British Prime Minister, Jeremy Corbyn, may claim amnesia about laying a wreath at the grave of Abu Jihad, but it is impossible to accept that this politician, so steeped in Hamas, Hezbollah, and the “armed resistance” to Israel, was ignorant of whose grave he paid homage in his paid visit to Tunis.

He would have been aware of the details of his itinerary and approved it prior to his visit.

But, in the unlikely event that Corbyn is ignorant about the gruesome history of Abu Jihad, here is a shortened account of this arch-terrorist’s handiwork.

Abu Jihad was really Khalil Al-Wazir, the founder of Fatah, second in command to Yasser Arafat, and the head of the PLO terror organization that plagued not only Israel but the wider Middle East.

During his terror reign through the 60s and into the 80s, 125 Israelis were murdered, mainly civilians.

Abu Jihad was the mastermind behind the Munich Olympic Games massacre that killed eleven of the finest Israeli athletes in 1972. Incidentally, Mahmoud Abbas was the moneyman behind this very public terror attack. His role was to dispense funds to cover the cost of the operation. Abbas has been rewarding Palestinian terrorism ever since.

The widows of the murdered Israeli sportsmen posted a touching response to the recent pictures of Corbyn at the graveside of the killers of their murdered husbands,

“For Mr Corbyn to honour these terrorists, is the ultimate act of maliciousness, cruelty and stupidity,” they said.

“Mr Corbyn has no place in politics, or in decent, humane society when he is driven by one-sided hate and vengefulness.

“If you want a genuine transformation of politics, Mr Corbyn, we would suggest that you first study history and understand how terrorism undermines and vilifies society and mankind.

“You have no place in politics, or in decent, humane society when you are driven by one-sided hate and vengefulness.

“Do not forget, Mr Corbyn, that you will be judged by the company you keep. We do not recall a visit of Mr Corbyn to the graves of our murdered fathers, sons and husbands.” 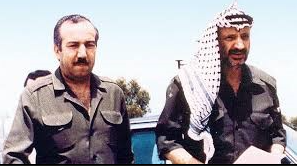 While conducting terror operations from Jordan into Israel, Abu Jihad began preparing PLO fighters to usurp power in Jordan. With a large Palestinian population, the PLO felt justified in taking power in Jordan and using it as a springboard for ongoing attacks into Israel. But the PLO over-reached themselves and, in what became known as Black September, the Jordanian king ordered a major operation to drive the PLO out of his kingdom.

They found refuge in Lebanon and began building up their terror base in that country from which they launched cross border raids into Israel.

During this period, Abu Jihad planned a 1975 raid on the Savoy Hotel in Tel Aviv in which is terrorists took civilian hostages killing eight of them as well as three Israeli soldiers.

The most lethal was the PLO-Fatah attack on an Israeli bus in 1978 on the coast road at the Glilot Junction on the northern outskirts of Tel Aviv that resulted in the death of 37 Israelis, 12 of them children. The reason for this attack was an attempt to scupper the proposed peace talks between Israel and Egypt.

Abu Jihad was hailed as a hero by the Palestinians as was one of the terrorists, Dalal Mughrabi. Abu Jihad is commemorated to this day in numerous official Palestinian sporting and cultural events as a figure to be emulated in Palestinian society.

More recently, Mahmoud Abbas also poured praise on Abu Jihad. In 2013. In granting him a posthumous award, Abbas said of him, “he was the model of a true fighter and devoted leader [and] through his commitment and contribution he left his mark on the history of the Palestinian revolution and the PLO.”

Corbyn shared this admiration by agreeing to attend the Tunis event.

Corbyn was aware, and shared, this adoration. It was an integral part of his admiration and support for armed resistance against Israel and its citizens.

Although exiled to Tunis, Abu Jihad masterminded the Palestinian terror campaign against Israeli civilians that was known as the “intifada.” Abu Jihad activated every terror cell in the territories to attack civilian targets, including suicide attacks. He provided them with financial support and logistical backing.

Abu Jihad was killed by an Israeli special ops team who stormed his house in Tunis on the night of April 16, 1988.

Abu Jihad was responsible for the deaths of 125 Israelis, the vast majority civilians and children. Yet, following the assassination the United Nations Security Council passed Resolution 611 condemning “the aggression perpetrated against the sovereignty and territorial integrity of Tunisia.”

In a terror training video, Abu Jihad can be seen exhorting his terrorists to “Blow up the whole building no matter how many people are in there.”

Abu Jihad was also the man behind the murder of US diplomats, Cleo Noel and George Curtis Moore, in Khartoum in March 1973. This operation was carried out with the express permission of Yasser Arafat.

This is the man that Corbyn went to Tunis to honor, no matter that he pleads ignorance today. He knew precisely who he was honoring that day, and whose blood was on his hands.

Barry Shaw is the Senior Associate at the Israel Institute for Strategic Studies and the author of ‘Fighting Hamas, BDS, and Anti-Semitism.’

The Left’s Version of Education: Straight from the Horse’s Mouth