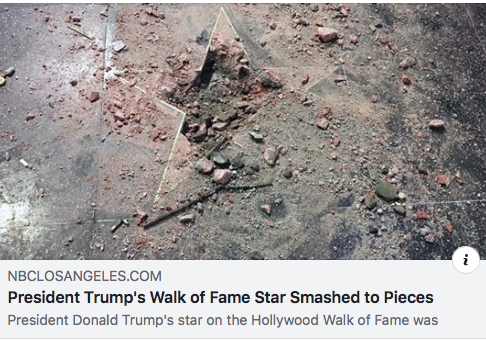 So this week another Donald Trump star bites the dust on Hollywood Boulevard. It’s almost impressive, the amount of anger it must have taken to pickax that marble and concrete star to death. And it’s hot in Los Angeles, too, currently in the triple digits.

Thank God there weren’t any plastic bags or straws around or someone really might’ve really been in trouble.

At least they’re only destroying property and not hurting actual people, right?

Every day the violence is escalating, and every day some random celebrity or politician or “comedian” is calling for more.  They are actually telling their followers exactly how to do it–painting pictures of decapitation, wearing t-shirts depicting hangings, making jokes about how to kill someone…

It’s like they’re all modern day Charles Mansons, keeping their hands clean while encouraging their minions do the dirty work.

As for President Trump, it doesn’t matter how many great things he ends up doing. We can cite statistics and accomplishments all over social media, radio, and television–but ultimately it just doesn’t matter.

So where is all this excess venom coming from? Sure they also hated George W. Bush but that was nothing like their hatred for Donald Trump.

What is so different now?

The simple truth is: A “President Donald Trump” was never supposed to happen.

The power brokers of the world, the media, the money providers for both the Democrat and the Republican Parties had never planned for Donald Trump to actually win. But oh yes he did, and this “outsider” who was actually in touch with The People of the United States was suddenly entering their Sacred Halls.

A non-politician celebrity billionaire like Donald J. Trump has the potential to succeed where none of the other politicians ever have–and there’s a world of mega-money tied up in all those failed politicians.

(Speaking of, despite George W’s complete silence during the 8 Obama years, isn’t it fascinating that he joined forces with Obama, Clinton, Carter et al and became very vocal about his disgust for President Trump? But I digress…)

So if Donald Trump were to succeed, corruption within governmental agencies might actually begin to get rooted out once and for all. And none of those agenda-laden Money Men want that to happen.

If Donald Trump were to succeed, transparency in government could become a reality. We’ve already seen that via Twitter, good and bad. And boy do they hate that.

Pork could get cut, the economy could continue getting better, and the last words some of those lobbyists and bad guys would hear is ‘You’re Fired!’ All the things the DC elites have always claimed to want to fix but never really wanted to fix could actually get fixed. Everyone wanted that before Trump came along, right?

Unfortunately for the president, there’s a major force out there trying to prevent him from accomplishing anything good. Those guys have been in power far too long and they know where all the bodies are buried. They’ve earned their stripes, climbing up and over and under too many of those Beltway bodies to allow an outsider to destroy their careers.

In other words, if President Donald Trump were allowed to succeed it would be as if he’s taking his own pickax to the entire political structure of Washington and beyond.

Unfortunately all this violence and anger isn’t about former Donald Trump fans who suddenly grew to hate him for being “too mean” or rude or crude. In fact the people who were initially screeching the loudest about morals are some of the most immoral folks on earth. If this was purely a matter of people not liking him, Trump would’ve had the chance to win them over. He loves winning.

But nope. It’s just not possible.

There is a very large and powerful group of bad guys working triple-time to prevent regular folks from realizing any of the good things President Trump is doing. They will continue promoting hate and fear, and they will continue urging violence.

Or maybe I’m completely wrong, and everyone will eventually calm down. Maybe they’ll all someday lay down their verbal weapons and their pickaxes and their dreams of murder and assassination.

Meanwhile what can we do? We can continue cheering and encouraging and citing facts and figures and accomplishments. But mostly, we need to hope and pray The People get out and VOTE this November to maintain the Republican House and Senate. Because otherwise, Lord help us all. Seriously.

Daniel Greenfield: Trump Stood Up to Putin, Obama Appeased Him