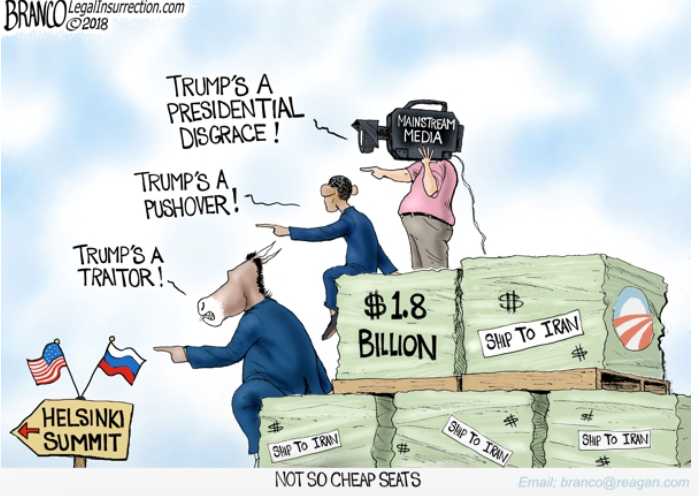 Yes, I am shamelessly borrowing a line from the movie, ‘A Few Good Men’.  Hopefully you’ve seen it. In what was a defining scene where the Tom Cruise character is interrogating the Jack Nicholson character, Cruise leans into the witness box and says, “I want the truth!” Nicholson, who is playing the character of Col. Nathan Jessep, stares down Cruise and states with fervor, “You want the truth? You can’t handle the truth!” And that is one of many dichotomies that exist in today’s political environment: the truth is tough to handle.

The satisfaction of confirming one’s own ideology which can sooth the political soul is much better than the recognition of reality and facts. This past week, Trump really got his foot caught in his mouth when asked about Russian interference. To the question he said, “I don’t see any reason why it would be Russia.” The media went into a ‘hair-on-fire—apoplectic ‘frenzy. Except for the grammatical contraction of n’t, added to the word ‘would,’ the statement took on an entirely different meaning. “Treasonous,’ cried the media. One would have thought Trump lied to the families of those killed in some far off place.

Wait a minute; that was Obama.

Or one might conclude that what Trump did was analogous to approving the sale of Uranium to Russia.

Hold on; that was Hillary.

The notion that Trump’s gaff was treasonous is preposterous. Yes, it was a significant error, but the shrill Democrats are making over it is baseless. As Alan Dersowitz has recently stated:

“There’s a reason that Democrats and Trump haters are intentionally choosing the word treason, even though it’s not remotely applicable.” Treason is one of the two crimes specified for impeachment, and that’s why…many of Trump opponents are focusing on treason, because if he did commit treason…then he would be subject to impeachment. But the criteria for treason is laid out clearly in the Constitution, and people shouldn’t just be making up crimes.”

However, according to Democrats and the liberal media, Trump is Russia’s agent. Yet, the facts just don’t support such a wild-absurd, and over-the-top assertion. When Obama had his first summit with Putin, Obama sat sheepishly while Putin delivered a lecture on US-Russian relations. It was Obama who gave in to Russia’s demand to remove anti-missile defense systems in Poland. It was the Obama administration that permitted Russian entities to purchase 25% of our Uranium reserves. It was Obama who drew a ‘Syrian redline,’ but then did nothing, providing Russia a presence in the Middle East and that fecklessness provided an impetus for Putin taking the Crimea. And finally, it was Obama who knew about Russian interference with our elections, but did nothing.

So, what has Trump done? In stark contrast Trump has increased US sanctions on Russian entities. He has withdrawn from Obama’s nuclear deal with Iran. Undoing Obama’s removing defense systems in Poland, Trump agreed to sell Patriot missiles to Poland. Also, Trump has placed tariffs on Russian exports to the US. Is this someone who is an agent of Russia? I think not, and that’s the truth. Can you handle it?