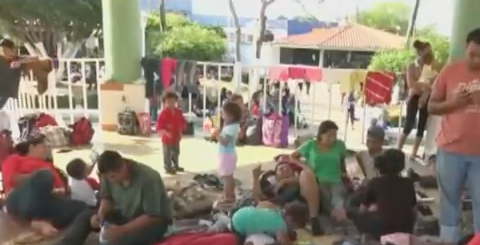 In June, CBS Evening news led off the program with an extensive report on the issue of separating parents from children when they as a unit cross the border into America illegally. The gist of the report, as would be expected by those paying attention, was entirely one-sided in its conclusions and speculation regarding the causes of this alleged “crisis” and pointing out the many emotional aspects without examining much of any legal aspects of the issue.

Video released by Customs and Border Protection were immediately presented as suspect because the news media were not permitted to do their own filming within the juvenile facilities used to hold minors who entered the country in the company of adults claiming to be their parents. It is obvious to anyone these days, who possesses any understanding of reality, that allowing news media to enter a government facility for the expressed purpose of filming minors being held within the facility would serious violate the privacy of both the minors and their parents who did not provide permission for their children to be filmed for later national broadcast on the evening news. How ridiculous can the media get?

At one point, in expressing frustration and dismay over the Trump Administration so-called “zero-tolerance” policy (that they claim erroneously is nothing more than a policy that could be reversed with the stroke of a pen), the reporter included a statement released on behalf of the First Lady, Melania Trump. However, only the first ten words of the complete statement (shown below with these first ten words bolded).

“Mrs. Trump hates to see children separated from their families and hopes both sides of the aisle can finally come together to achieve successful immigration reform. She believes we need to be a country that follows all laws, but also a country that governs with heart.”

This partial statement was clearly intended as a flagrant attempt to make it appear that the First Lady was in opposition with the President regarding this policy. As the rest of her statement made clear, it is not a problem for the President to fix but rather a problem that Congress both created and must fix through legislation.

CBS further insulted the intelligence of its viewers (at least the ones with brains) by trying to say that the issuance of thermal blankets typically found in survival gear, fire-fighter equipment, to the minors to keep them warm was some sort of inhumane treatment. Having used one of these blankets for some tent-camping trips I can attest that they very effectively keep one warm even in seriously cold conditions. There is certainly nothing inhumane about them being used to help keep the minors warm. Again, much hysteria about nothing.

The fact of the matter is, this situation was created by Congress back in the 70s when legislation was approved regarding the immediate detention of those crossing the border illegally. The difference between then and now and the years in between is that most of the previous administrations failed to do their constitutional duty to uphold the constitution and the laws of the United States. While the Bushes and Bill Clinton failed in this regard, former President Obama instituted the most blatant disregard when he instituted the policy called “Catch and Release” which directed that illegal border crossers should be detained long enough to document their identities and then released with direction to report at a future date for a hearing before an immigration judge. This brief detention did not require that the children be separated because it was a very brief period between detention and release…thus the name.

There is no basis in the law for such a policy as Barack Obama instituted, but it was kept very low-key and seldom pointed out as a violation of law by anyone in the government or media. The results, however, 1) 80% of those apprehended at the border never showed up for their hearing; and 2) there was a devastating increase in illegal border-crossings over the eight years the policy was in effect under Obama as word traveled quickly that if you get past the border center you were home free.

At the same time Catch and Release was going strong, nearly all illegal border-crossers were eligible to obtain Taxpayer Identification Numbers (TINs) that made them eligible for tax credits nearly identical the Earned Income Tax Credit provided to parents of minor children. The illegals, however, abused the system to the tune of over $1 billion or more, claiming the credit for people who were not even present in their households or related in any manner. They also managed to gain access to free medical care and welfare benefits comparable to those available to U.S. citizens. The Obama years were fraught with policies that turned a blind eye to violations of federal laws for no other reason than to further ideological goals.

What is happening now is simple that the Trump Administration is doing the job that the President swore an oath to do…enforcing the laws of the United States. Because the law requires that illegal border-crossers be detained until their identity, country of origin, and reason for entry can be verified, this process can take days or weeks to complete. During that time, it is patently unsafe to house minor children in the same facility with other detainees that could present a danger to the children. The solution, given a biased media’s efforts to slant the reporting to make things look as bad as possible, becomes a manufactured crisis that is clearly not worthy of the hysteria currently being expressed across the country. It is clearly manufactured hysteria intended to undermine the rule of law and the Trump Administration. It has nothing to do with actual conditions or any threat to the children’s welfare. It must be kept in mind that the parents created the problem by illegally crossing our border.

In parting, given the frequent reports in the various media regarding the prevalence of child sex trafficking and indentured servitude of minors that came to the country unaccompanied or with people posing as their parents, does it not make sense to determine the identities of the “parents” and their relationship to the children before turning them loose? It seems to me that the government is taking every precaution to protect the minors until it is deemed safe to release them to their parents or deport the entire family back to their country of citizenship.

Overall, this is a case where emotion and hysteria is clearly over-riding sound judgment and common sense. We either are or are not a country of laws. It cannot be up to any President to decide that he will not enforce the law. It is his duty. President Trump is simply doing his job….doing his duty.

Bump Stocks: Not Worth the Effort, Buy Ammo Instead