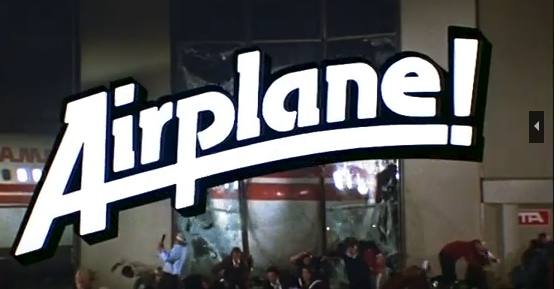 The 1970’s was gold for disaster movies such as “The Poseidon Adventure”, “The Towering Inferno”, “Earthquake!” and the classic Airport series – “Airport 70”, “Airport 75”, “Airport 77”, and “The Concorde – Airport 79”. No doubt people were afraid to fly or even leave their house by the time the decade was over!

Then in 1980 comic writers Jim Abrahams, David Zucker and Jerry Zucker released a “disaster” movie of their own. It was 38 years ago this month that the movie “Airplane!” hit the theaters and comedy has never been the same. It was a totally different kind of movie – altogether. And I’m sure for many, like myself, just the thought of it brings to mind many funny moments and scenes. 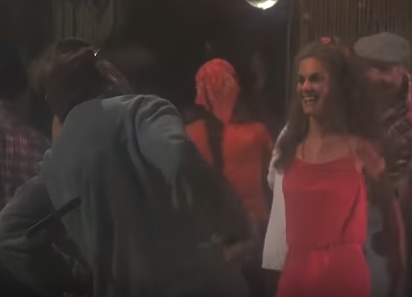 Even today whenever I hear “Stayin’ Alive” by the Bee Gees I can’t help but think about the dance scene where the old man is frantically trying to indicate to Elaine that he has been stabbed in the back but she thinks it’s a new dance move and imitates his movements. Hilarious!

The movie was the first of a whole new genre of “spoofing” movie dramas. And the concept of having classic actors such as Lloyd Bridges, Peter Graves and Robert Stack play the drama so over the top and dead panned that it was viewed as comedy was brilliant. But what many even today don’t realize is that Airplane was essentially a remake of an old movie from 1957 called “Zero Hour”. The ZAZ team had seen this movie on late night television and decided to make a comedy out of it. The story line is the same – a food poisoned crew and a reluctant fighter pilot who is the only one who can save them. You can see a great comparison here. Even the choice of Kareem Abdul Jabbar as co-pilot Roger Murdock was inspired by NFL star Elroy “Crazylegs” Hirsch playing Captain Bill Wilson in “Zero Hour”.

At least now I understand what war Ted Striker was supposed to have flown in!

The cast of “Airplane!” included so many great performances. I found it interesting researching several of the crew on imdb:

Julie Hagerty (Elaine) started her career as a model then transitioned into acting. This was her first major role and along with Airplane 2 is her bet known work. Co-star Robert Hayes described her this way: “But she was just perfect. I can’t imagine anybody being more perfect for that role. She’s just the sweetest thing on the planet. She still is.”

Leslie Nielson – When you read through Leslie Nielson’s credits in imdb it is amazing the amount of work he did prior to Airplane. It read’s like a who’s who of TV shows and movies. And most all of it was dramatic roles. How many remember that he was the Captain of the Ship in the Poseidon Adventure? But Airplane catapulted him to fame as a comedian – and a phenomenal one at that. Even though he still did some drama (I consider his performance in a Highway to Heaven episode among his best), after Airplane he was best known for his hilarious spoofs. Not bad for a guy people kept calling Shirley.

Howard Jarvis – Man in Taxi. He was a consumer rights activist who led a campaign in California in 1978 for “Proposition 13” which cut property taxes by 57 percent.

Amy Gibson – the soldier’s girl (the one who kept knocking over steel towers). She was diagnosed with alopecia (abnormal hair loss) and later created her own hair piece line called “The Color Beautiful Collection”.

Maureen McGovern as the nun. For some reason I never realized it was her until researching for this article. It makes sense though that she would appear on this spoof of disaster movies. She had a #1 hit in 1972 with “The Morning After” which was the love theme from ‘The Poseidon Adventure”. And she also appeared in “The Towering Inferno” singing”We may never love like this again”.

Stephen Stucker as Johnny is my favorite character of the movie. The hilarious manner in which he jumped into and out of scenes with one line quips really made the movie. From imdb:

During his school days Stephen was known as both an accomplished pianist and a class clown with a dry wit. Stucker made his film debut with a funny turn as crazed asylum escapee Bruce Wilson in the entertainingly lowbrow “Carnal Madness.” He was likewise sidesplitting as a cross-dressing court stenographer in “The Kentucky Fried Movie.” Stephen achieved his greatest enduring popularity with his gloriously zany and unforgettable performance as loopy airport control room worker Johnny in the hilarious disaster picture parody “Airplane!.”

Jimmie Walker had a cameo as the windshield washer man. He had also appeared in “The Concorde – Airport 79”. 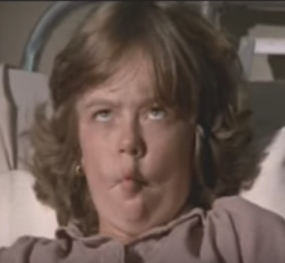 Jill Whelan (Lisa Davis), who went on to star in “The Love Boat”, made one of the most hilarious faces in the history of film.

Frank Ashmore (Victor Basta) has had a long and successful career. I remember him most from the “V” mini-series. He also appeared in a “Happy Days” episode as the photographer and husband of a starlet played by Cheryl Ladd.

Seeing Barbara Billingsley, the quintessential 1950’s TV mother do jive talking was one of the funniest moments of the movie. Al White, the second jive dude, explained the process of teaching Mrs. Cleaver how to jive talk:

“I ended up writing Barbara Billingsley’s jive dialogue and instructing her in its proper elocution. [Laughs.] She was very intent on getting it right. I worked with her for two hours on her dialogue, so when she got up and said, “Excuse me, stewardess, I speak jive,” she did! But when she says, “Cut me some slack, jack,” now that she had a little trouble with. Because she read it as I wrote it: “Cut. Me. Some. Slack. Jack.” I said, “No, you have to kind of bring those words together, you know, kind of truncate, so ‘cut me some’ is ‘cummesome.’” So we worked on that a little bit, and when she finally got it, she was so pleased. She really did a wonderful job on that.

It was such a pleasure working with Barbara. And as a matter of fact, my mother just loved Leave It To Beaver, and what I did was, I asked Barbara if she wouldn’t mind speaking to my mother. That was the crowning moment, because I called my mother, and I said, “Mom, I have Barbara Billingsley here, and she’d actually like to speak to you.” She was so excited, and Barbara was so gracious. That was really wonderful of her to do that for me and my mother. In fact, several years later, Barbara came to see me in Gem Of The Ocean, an August Wilson play I was doing at the Taper [Forum in Los Angeles], and she sent me a beautiful card, thanking me and telling me how wonderful it was to see me onstage and to have worked with me. I still have that card. She really was lovely. 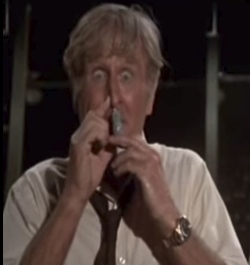 Of all the projects that Lloyd Bridges has appeared in throughout his stellar career, when most think of him they will remember “It looks like I picked the wrong week to quit smoking…” (fill in the blank).

And who could forget Otto? Believe it or not he has his own imdb page, of which this was said of him:

His charismatic and positive loving character always smiling captured audiences attention from the get-go, turning him into one of the most remarkable icons of the 1980’s. Little is known about his fate and possible other projects, except that he disintegrated in Jerry Zucker’s garage house some years after his famous film role.

The ZAZ trio make appearances in the movie as well as their family:

The ZAZ team themselves have cameos in the film, as do several of their family members. The Zucker brothers are the ground crew at the beginning who accidentally cause a plane to crash through a terminal gate window. Abrahams is one of the religious fanatics Rex Kramer knocks over. Mom Charlotte Zucker is the passenger trying in vain to apply her makeup. The Zuckers’ sister, Susan Breslau, plays a ticket agent. Abrahams’ mother is the woman initially sitting next to Dr. Rumack.

There is also another clever reference to the ZAZ team that I never noticed before – “WZAZ in Chicago where disco lives forever”.

But of course the most memorable parts of “Airplane!” are the classic quotes. Here are some of my favorites:

Johnny: “Where did you get that dress. It’s awwwwful! And those shoes and that coat…jeeez”

Captain Oveur: Joey, have you ever been…in a Turkish Prison?

Reporter: What kind of plane is it?

Johnny: Oh, it’s a big pretty white plane with red stripes, curtains in the windows and wheels and it looks like a big Tylenol!

Jive Lady: Jus’ hang loose, blood. She gonna catch ya up on da rebound on da med side. (Golly!)

Johnny: There’s a sale at Penney’s!

Ted Striker: It’s a damn good thing he doesn’t know how much I hate his guts.

Elaine Dickinson: It’s a damn good thing you don’t know how much he hates your guts.

Rumack: Elaine, you’re a member of this crew. Can you face some unpleasant facts?

Steve McCroskey: [to Mrs. Oveur] Now your husband and the others are alive, but unconscious.

There’s even a reference to my favorite western, “The Big Valley”:

Steve McCroskey: [talking to Rex Kramer] Ease off, Rex. He hasn’t flown for years; it’s not his fault. It could happen to any pilot.

Johnny: It happened to Barbara Stanwyck.

Johnny: Nick! Heath! Jared! There’s a fire in the barn!

So what are your favorite memories/quotes from Airplane?

And I just wanted to tell you all – good luck! We’re all counting on you!

And remember – the white zone is for loading and unloading of passengers only. There is no stopping in the red zone.