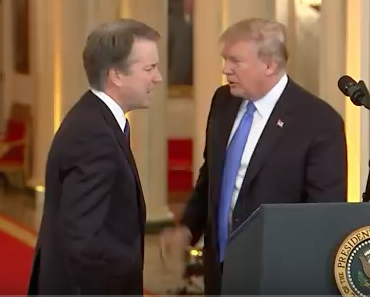 On July 15, Michael Tomasky’s Editorial appeared in the New York Times. In it, he makes the case that the Democrats cannot come out on top in November by simply attacking Brett Kavanaugh’s position on legal issues relating to abortion, Obamacare, and similar things. He opines that to do so would make them appear weak and ineffective.

So, what is his magical approach to defeating the nominee? Attack his past acts and the character of – not the nominee – but President Trump! Is that bizarre or what?

Tomasky suggests that the Democrats need to return to the late 1990s and the Kenneth Starr probe into the behavior of that pillar of character – President William J. Clinton. Yep! He’s really suggesting that they attempt to attack the nominee based on bringing up one of the most embarrassing scandals of the Clinton era. Even more insane, he is suggesting that Kavanaugh be questioned about the possibility that he was the source of leaks to the press during the Starr investigation. Not one ounce of evidence has ever come to light that Brett Kavanaugh had anything to do with such leaks, but – what the heck – let’s use that to stir up the voting base and see where it goes. Maybe if he shows up drunk and admits he was the source of the leaks we can all go home for the weekend and raise a glass of white wine in celebration of his defeat.

Then the crowning touch in Tomasky’s scenario is the idea that since Clinton was impeached for lying “to the American people” and Kavanaugh was the author of the Starr Report, then he would he at odds with his own expressed belief that a President cannot be indicted for a crime while serving in that office.

The seriously flawed thinking evidenced in this “opinion piece” is that indicting a sitting President on criminal charges is not the same as impeaching a President for behavior while serving in that office. One is a constitutional process while the other is a criminal process. Not nearly comparable.

Knowing Kavanaugh has a reputation of being a very astute attorney and judge with a plethora of rulings demonstrating his acumen, it would take him less time that it took to type this sentence to wipe the floor with any Democrat dumb enough to follow Tomasky’s suggestion and bring up this argument to impugn the candidate.

One thing is highly apparent in the editorial…Democrats are desperate to come up with a means whereby this critical nomination can be de-railed. Unfortunately, of the finalist President Trump offered up, Kavanaugh is certainly the least radical and the one that presents the best chance of surviving a mad-dog nomination process that is sure to come at the hands of the Democrats.

As far as Tomasky’s lame attempt to offer some help to his leftist Democrat friends, let’s hope they take his advice. Just the shear nastiness and lack of evidence in his approach will certainly energize those of us who believe that the constitution should be interpreted based on its original meaning and intent. That energy will appear most prominently at the polls in November when we can vote out as many ignorant Democrat fools as possible, in favor of those who support our President has his nominee.

Using Clinton to impeach Brett Kavanaugh? Really. Could be the New York Times will actually help conservatives simply by publishing such an insane editorial. Go, Michael!!

The Trump/Putin Summit: What the Media Isn't Reporting