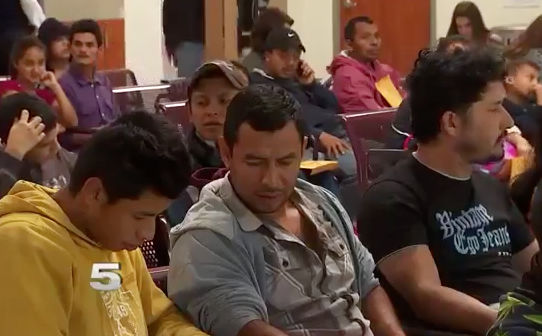 Ever since President Trump introduced his “zero tolerance” policy of arresting and prosecuting every illegal immigrant captured at the southern border, the left has been in a totally irrational hissy-fit. To hear them tell it, Immigration and Customs Enforcement (ICE) has been “destroying families” and “traumatizing kids” from families that are attempting to seek asylum by presenting themselves appropriately at ports of entry which is supposed to be the legal way one seeks asylum.

As with so much of what one hears on the mainstream media these days, the left’s agenda is always prominently displayed. That agenda, above all else, is focused like a laser on keeping the flow of people entering our country free of prosecutions and deportations because every one that gets in and is freed within the country is another potential Democrat voter. Since the left cannot win on legitimate issues, they are desperately attempting to swell their numbers through importation of voters. They know that the current system ensures that nearly every state will eventually register illegals to vote.

The secret that is seldom mentioned is that for every illegal that gains entry and eventually is given some sort of amnesty can produce more than one vote through “chain migration”, a term referring to the fact that any person granted legal residence is then permitted to seek entry for virtually any living relative who wants to join them in America.

The truth of the matter is, those presenting themselves at ports-of-entry and seeking asylum based on legitimate reasons that are outlined in statutes approved by Congress and signed into law by past Presidents over the years has never been an issue. In cases where a family does so, they are not separated from their children or incarcerated in any sort of jail. They are typically processed rapidly and either allowed to enter as refugees or returned to their country of citizenship immediately.

The current policy regarding those who attempt to enter illegally at any point on our borders is that they are detained, and children are separated from adults and housed in centers that provide food, clothing, education, and medical treatment, if necessary. The oft-shown photos and videos of intake centers near the border with chain-link fenced enclosures and the like are not where children are housed.

These actions are not based on administration policy but rather a law passed in the 1980s that was challenged in court. This resulted in two federal judicial rulings that requires children to be separated from adults after a maximum of 20 days. It often takes more than 20 days to determine the identities and relationships of those entering illegally.

Another point that is ignored by most media stories is that many of the “families” that attempt to enter illegally are not families at all. The “parents” are often found not to be related to the children with them. In most cases where this occurs, the true intent of the adults is to gain entry and subsequent release into America with the children often used in sex trafficking and/or involuntary servitude.

There are also safety concerns any time children are detained in a facility shared by adults. Fights can break out, molestations occur, injuries result. It makes no sense to keep children with adults when ICE does not even know if the adults are related to the children.

The bottom line here is that the administration is simply doing what their constitutional responsibilities call for…enforcing the laws as they are written and interpreted by the courts. It seems in recent years that this had become a lost art. It is certainly refreshing to those of us that believe in the rule of law that our President is truly doing his job. But the continual hysteria of the leftist media seems to always drown out the truth in most cases. It is beyond time that this ridiculous argument over child separation policy be put in proper perspective and laid to rest. It is neither cruel or unnecessary. It is simply doing what is right to ensure the children are protected until we know who the adults are and why they attempted to enter illegally.

We should never forget one other very pertinent fact. This entire problem of frequent attempts by adults accompanied by children attempting to enter our country illegally is largely the result of eight years of Democrat “Catch and Release” policies that failed to enforce the immigration statutes as they are intended to be enforced. Thanks, again, Barack Obama. The “Gift” that keeps on giving (whether we wanted it or not).

Happy Resistance Day: Leftists Celebrate the 4th of July (But Not in a "Happy Birthday, America" Kind of Way...)