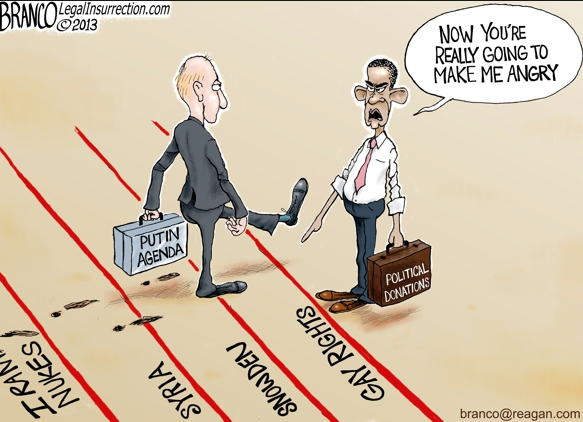 “How did we get into this mess?” Obama asked Putin.

It was the summer of ’09 and the two men, one a former community organizer and the other a former KGB officer, were sitting on the veranda of Putin’s dacha. While Obama noshed on three types of pricey caviar, Putin took a bite out of his junior colleague by delivering an extended denunciation of America.

Obama listened without a word of protest to Putin’s attack on America. According to Michael McFaul, his point man on Russia who has been attacking Trump prominently in the media, “the history lesson was even rather helpful because it enabled him to emphasize to Putin: well, I’m different, I’m new.”

Putin’s litany of American foreign policy crimes was cunningly fitted to the politics of the left. On that summer day, Russia wasn’t an enemy, but a victim of the Bush administration’s cowboy diplomacy. And Obama was seeking common ground with Russia, Iran and the Brotherhood against the Republicans.

By different, Obama meant that he didn’t care about traditional alliances or national interest. Selling out American allies like Poland had gotten Barry a taste of Vladimir’s beluga. The cost of the caviar was missile defense for Eastern Europe. America wanted it there and the Russians didn’t.

The caviar followed Hillary Clinton’s comically disastrous reset button push. Both Hillary and Obama needed these photo ops. Putin didn’t need the photos. He wanted concessions. And he got them.

The betrayal and abandonment of Poland was only the first of Obama’s many concessions to Putin.

Instead President Trump has steadily reversed Obama’s tide of concessions to Putin.

The media is outraged over Russia’s invasion of Ukraine. But when that happened, Ukraine asked for weapons and the only aid that Obama offered their country was MREs. It took months for Obama to come through with boots and tires. Meanwhile Trump has delivered actual weapons.

Why did Obama refuse to provide Ukraine with weapons? According to senior officials, to avoid antagonizing Moscow. Trump isn’t afraid of Russia. Obama however was shaking in his loafers.

While Trump approved anti-tank missiles for Ukraine, Obama slow-walked shipments of boots, putting them on trucks instead of planes so that they took months to arrive, so as not to upset the Russians. Meanwhile the Trump administration cut the red tape by dipping into its own European stockpiles.

In the time it took Obama to ship boots to Ukraine, Trump shipped Javelin missiles.

Obama shelved missile defense for Poland and the Czech Republic. Trump cut a multi-billion deal for selling Patriot missiles to Poland. When Obama provided Patriot missiles to Poland, he neglected to mention that the batteries would not actually contain missiles. The ambassador to Poland, had noted, “The Poles have not been told that the battery will rotate without actual missiles… but it will also not be operational, and certainly interoperable… this will be a question of basic definitions for the Poles: is it a Patriot battery if it doesn’t have live missiles?” Trump’s missile deal comes with actual missiles.

When Obama’s old foreign policy hands crowd the green rooms of CNN and MSNBC, when they pen editorials for Foreign Policy and the Washington Post, accusing Trump of betraying Eastern Europe to Russia, remember these are same people who sent fake missiles on Poland to go with the fake news.

Every new president is entitled to the occasional foreign policy blunder. But sacrificing Poland to Putin wasn’t a singular event. Three years later, Obama was caught on a hot mic assuring Medvedev, Putin’s political flunky, that he needed space on, “missile defense” until the Republicans were defeated.

“This is my last election,” Obama wheedled. “After my election I have more flexibility.”

“I understand,” Medvedev offered. “I will transmit this information to Vladimir.”

Obama was conspiring with Putin against the American people. He was assuring Putin’s man that he would have more flexibility to appease Russia after he had fooled America.

The media has been screaming that Trump was a traitor, when it was their man who sold out to Putin, while President Trump held the line on missile defense without caring about what Moscow thought.

And it wasn’t just missile defense in Eastern Europe.

Obama’s obsession with dismantling our national defenses led him to ignore Russian violations of the INF treaty. Not only did Obama ignore the violations which had been going for an entire term, but he and his political allies helped cover them up. The motive was a mix of appeasement and cover-up.

“We’re not going to pass another treaty in the U.S. Senate if our colleagues are sitting up here knowing somebody is cheating,” John Kerry said.

Obama officials lied about Russian treaty violations to Congress while pushing new treaties with Russia. Then they went on to pull the same trick over their fake WMD deals with Russia’s allies in Syria and Iran. Each time, violations were ignored and a fake agreement was trumpeted by Obama for political gain.

The caviar conference in ’09 set the template for eight years of Obama’s sellouts of America.

In the winter of last year, the media buzzed with stories about Russia deploying a new cruise missile in violation of the INF. And, as the New York Times put it, “challenging Trump”. But when Russia was violating the INF under Obama, the media accepted the Ben Rhodes spin about smart diplomacy. All the smart appeasement in the world though failed to get compliance or punish the Russian violations.

Instead Obama sold out America by unilaterally complying with a treaty that the Russians were violating.

The Russians rolled Obama on the INF and START treaties. Then they rolled him on Assad’s chemical weapons. And then they went for a triple score by rolling him on Iran’s nuclear program.

That’s how we got into this mess.

Obama did not care about missile defense. The diplomatic outreach of the newly selected leader traded resets with enemies for the betrayal of allies. In Egypt, Obama would abandon Mubarak to the Muslim Brotherhood. When democracy protests broke out in Iran, Obama urged waiting for the dust to settle. The resets were paid with the blood of Iranian protesters, with Christian churches in Egypt and with the Russian expansionism that would lead to the loss of Flight MH-117 and the annexation of Crimea.

The media has spent a day losing its mind because of what President Trump said or didn’t say. Yet Obama not only obsequiously praised Putin, “I am aware of not only the extraordinary work that you’ve done on behalf of the Russian people in your previous role as prime minis-, uh, as president, but in your current role as prime minister,” not only failed to stand up for America when Putin lashed out at the United States, but betrayed us in deeds.

We are being lectured on appeasement, treason and weakness by the very people who dismantled our nuclear defenses, who sold off our uranium to Russia, and who rewarded Iran for its nuclear program.

None of their speeches will wash away their appeasement, their cowardice and their treason.