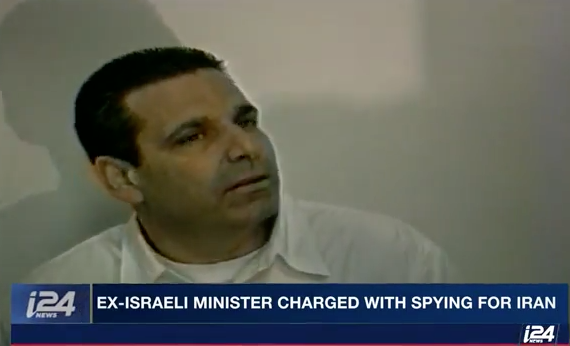 When the Oslo deal that would create two Islamic terror states inside Israel came up for a vote in the Knesset, the legislator whose vote helped it pass is the same man now accused of spying for Iran.

The strange story of Gonen Segev, doctor, Minister of Energy, drug smuggler, Nigerian exile and now accused Iranian spy, is also that of the dirty politics behind the peace process. It wasn’t idealism that made the deal with the PLO. It was dirty backroom deals with dangerously unprincipled politicians.

Segev’s cousin had testified in court that he was “a pathological liar who makes excuses and evades responsibilities for his actions.” But the same is true of the Israeli left which brought Segev on board.

The alleged Iranian spy began his political career on the right. But 3 years after he became one of the youngest members of Israel’s legislature, he aligned with the left and helped pass an agreement with the PLO that is the second biggest threat to Israel’s existence after Iran’s nuclear weapons.

It’s only fitting that Gonen Segev, whose political life hit its terrible peak with the PLO deal, should climax his post-political criminal career by standing accused of spying for Israel’s worst enemy.

And the former politician and defrocked doctor has the same excuse for the latter crime as for the former one. He wanted to be a hero. But Gonen Segev doesn’t have a history of being a hero.

What he does have is a history of being willing to do anything for money.

No matter what the Iranians offered him, the biggest bribe that Israelis will remember Segev for was the time that he became the Minister of Energy in a left-wing government. Segev had no qualifications for the job. Except one. He had a crucial seat in the Israeli Knesset as the deal with the PLO was up for a vote. The idea of giving Arafat and his band of murderous killers a state was so politically toxic that even some members of the ruling Labor Party couldn’t bring themselves to vote for it. But he could and did.

Gonen Segev was a nobody. He was a doctor in a country full of them. But he happened to be living in the community of Tel Adashim. Aside from its history, Tel Adashim or Lentil Hill, wasn’t very interesting. But it was the home of Rafael Eitan, an irascible former general and fierce critic of appeasing terrorists. Eitan was right about fighting terrorists, but his ability to run a political movement was minimal.

Israeli voters had sent Gonen Segev and other Tzomet members to the Knesset to fight terrorism. Instead some defected to the other side. When the crucial vote on the deal with the PLO came up, it was the candidates elected by anti-terror voters who, perversely, were the ones to vote for terror.

The political faction that split off from Tzomet was known as Yiud or Mission. Its mission was obvious.

Of the three Knesset members who joined the left and took their votes along, Gonen Segev became Minister of Energy and Alex Goldfarb was appointed the Deputy Minister of Housing. Goldfarb, a Romanian immigrant, had been an electrician and a union activist.

Yiud fractured. Segev became its only remaining member. There was no long term career for the only member of an imaginary political party that had betrayed its original voters. As the PLO deal continued to take Israeli lives, the left lost power. And Netanyahu’s victory all but ended the rule of the left.

But Gonen Segev didn’t give up easily. He was accused and seemingly cleared of corruption. He allegedly developed contacts in China. Most Israelis forgot about him, but then he was suddenly back in the news.

The man who helped give Arafat a state had been caught in Amsterdam with thousands of ecstasy tablets in boxes of M&Ms. The former Minister of Energy tried to claim diplomatic immunity by showing airport security a diplomatic passport from 2000 which he had clumsily tried to change from a ‘0’ to a ‘6’. Then he insisted that he really thought they were candy and was just doing a favor for a friend.

The bizarre case finally ended with Segev pleading guilty to trying to smuggle 32,000 ecstasy tablets into Israel. That came after he was convicted of credit card fraud for having his ex-wife claim that his credit card had been stolen in Hong Kong even as he withdrew over 20,000 shekels.

Segev’s downfall attracted the attention of the Israeli right which saw it as a clear case of poetic justice. But it also put the former politician on Iran’s radar. The Islamic terror state claims to be a shining example of morals, but funds its international terror network through drug trafficking. Hezbollah, the Shiite Lebanese terror group that is its greatest stalking horse, grows rich drug crops of Lebanese Gold in the Bekaa Valley, moves heroin to Australia and smuggles cigarettes around the United States.

It’s also deeply involved in the West African drug trade. And that was Segev’s next stop.

The former doctor had lost his medical license in Israel. So he set up shop in Nigeria. And Nigeria has long been a home for Hezbollah drug and terror operations. Just as in the United States, Lebanese businessmen serve as Hezbollah’s agents, moving money, weapons and drugs around the country.

Few Israelis have been corrupted into spying for Islamic terrorists. But those who have were usually reached through the drug trade. People corrupt enough to turn to drug dealing and smuggling are the type willing to do anything for money. And that certainly described Gonen Segev’s debauched career.

As the worst sort of exile, Gonen Segev was working as a doctor in Nigeria. In 2016, he asked Israel to reinstate his medical license. “I’ve decided I’m not coming back to Israel unless I can return with my head held high as ‘Dr. Gonen Segev’,” he insisted.

By that point he was already allegedly working for Islamic Republic of Iran.

The lurid tale now unfolding has Segev traveling to Iran, secretly receiving orders from Iranian officials and passing along Israeli contacts to Iran’s intelligence network. And his excuse is the same.

The thrice disgraced politico wanted to be a hero.

And Gonen Segev is a hero. He was a hero to the left, to the PLO and a hero to the Iranians. But never to Israelis. Former members of the conservative political party he betrayed want to see him rot in jail.

Former Tzomet MK Pini Badash described him as a “paranoid megalomaniac who went from being the party’s most right-wing MK to selling out Israel for the bribe of a seat in Rabin’s cabinet.”

“It’s amazing that Oslo passed because of bribing him. This shows how illegitimate Oslo was.”

But the Oslo deal that created two Islamic terror states inside Israel was the work of men like Segev, opportunistic megalomaniacs driven by ego and unwilling to consider the consequences. Uncaring of the catastrophes they unleashed, they stumbled from one treason to another leaving the dead and wounded, shattered homes, blown out buses and growing cemeteries in their wake.

There is no counting the lives that Segev’s actions cost. Countless children lost their fathers and mothers. And parents lost their sons and daughters. Even long before the former doctor had allegedly gone to work for the Iranians, entire hospitals could have been filled with the casualties of his vote.

Many speeches have been given about the price of peace. In Israel, there were two prices of peace. One was paid by the thousands of wounded and the dead. The other was paid out to Gonen Segev.

The price of peace is terror and treason.

Ann-Marie Murrell: Is It Possible to Calm Down the Politically Frantic (and Should We Try)?

What Malcolm X Said About the Democrat Party