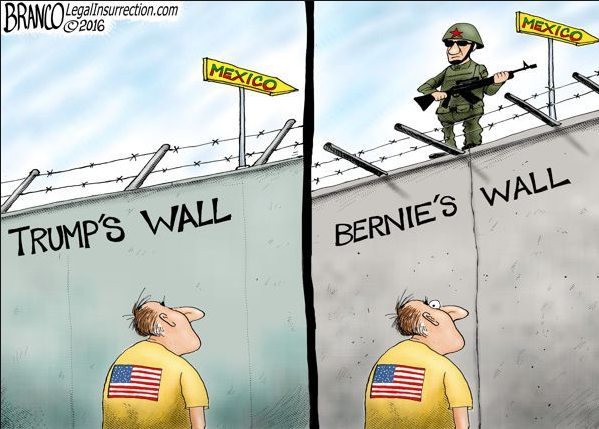 “Open borders? No, that’s a Koch brothers proposal,” Bernie Sanders snapped. “You’re doing away with the concept of a nation state, and I don’t think there’s any country in the world that believes in that.”

“What right-wing people in this country would love is an open-border policy,” he continued. “You know what youth unemployment is in the United States of America today? If you’re a white high school graduate, it’s 33 percent, Hispanic 36 percent, African American 51 percent. You think we should open the borders and bring in a lot of low-wage workers, or do you think maybe we should try to get jobs for those kids?”

That was three years ago.

Bernie’s final surrender came after dodging a question on CNN about abolishing ICE. After the backlash, he went even further, issuing a statement urging that we “abolish the cruel, dysfunctional immigration system we have today”. Open borders had gone from a right-wing position to a Bernie position.

“Republicans try all these scare tactics. And they go ‘Oh, open borders.’ Because they’re trying to incite fear,” she added.

After the backlash from the open borders interview, he adopted contemporary leftist positions. His platform was full of boilerplate language about Republican “anti-immigrant and xenophobic hysteria”, mass amnesty for 11 million illegal aliens and ending the “militarization” of the border.

That was the new position of the candidate who once told MSNBC, “I don’t think there is any candidate for president — none — who thinks that we should open up the borders.” The platform appears on the same Bernie site where an old article dubs open borders a “trendy libertarian idea” and calls for improving the economies of other countries so that their immigrants don’t come to America.

Even people who don’t like Bernie Sanders think that he honestly believes what he says. His views, they imagine, are so extreme that he might be wrong, but he must be authentic. But Bernie’s actual record reveals a pattern of cowardly flip-flopping in response to political pressure from the left.

Bernie 2.0, the formerly poor politician who has earned over $1 million for two years running, is a very different political animal than the crusty old socialist that Obama’s old lefty allies dug up in Vermont.

The left’s favorite Senator owes his seat to the NRA. He voted against the Brady Bill and was listed as the only non-Republican among the 25 top recipients of money from gun-rights groups. Hillary Clinton quickly zeroed in on gun control as Bernie’s weakness. And his response to her was praised by the NRA. And then, as usual, the flip-following followed the leftist backlash in the media and on social media.

After telling the New York Daily News that firearms manufacturers shouldn’t face lawsuits from victims of crimes committed with firearms, he flipped his answer completely around at the debate. It only took a few weeks for Bernie to go from, “No, I don’t” to “They have a right to sue, and I support them.”

These days Bernie is hanging out with David Hogg and blaming a “three letter word” for gun violence.

“It’s the NRA,” Sanders recently sneered. “And it’s Trump and the Republicans who don’t have the guts to stand up to these people and that’s pretty pathetic.”

But it’s Bernie who is too pathetically gutless to stand up to the bullying of his own political radicals.

In 2014, Bernie Sanders got into a shouting match at a town hall over his condemnation of Hamas. Two years later, he falsely claimed that Israel had killed 10,000 innocent people in Gaza. These days his public statements on the subject are often little better than Hamas propaganda.

Bernie 2.0 was shaped by a series of confrontations with key Democrat constituencies that sliced away whatever was authentic about him and left him one step closer to being a generic Democrat.

Black Lives Matter activists harassed Bernie Sanders until he adopted their platform. So did illegal alien activists. He sparred with the Human Rights Campaign, the leading gay rights lobby, and Planned Parenthood. Each confrontation followed a familiar pattern, a surly response from the Sanders campaign, followed by a quiet capitulation and a loud affirmation.

After running against an inauthentic politician with a wet finger in the wind, Bernie took on all her traits.

But Bernie is very different than Hillary. While Hillary Clinton was her own woman, Bernie is a puppet. Revolution Messaging plucked him out of obscurity because they couldn’t get Elizabeth Warren. Lefty consultants frozen out by the Clinton campaign and book publishers made millions off Bernie.

Bernie also cashed in. He’s up to three homes and has joined the 1 percent. His wife and stepkids have their own cozy arrangements. Officially he’s the leader of a movement. The reality is he’s a brand.

The inept Vermont socialist isn’t actually leading a movement. He’s just the face of one.

That movement, whose key figures are people like Keith Ellison and Alexandria Ocasio-Cortez, have little in common with who Bernie was. The old socialist had tapped into traditional lefty strains in New England politics. His movement is top heavy with urban diversocrats like Ben Jealous and Stacey Abrams. It hasn’t tapped into anything except the radicalization and narrow identity politics of the Democrats.

Bernie Inc. helped mainstream the use of socialism. But despite the tingly feeling that saying, “Socialism” gave the left, its pitch isn’t all that more socialist than the Democrats already are. Buying minority votes with freebies has been the elevator pitch of the Democrats since LBJ. Free college isn’t some radical new idea. It’s a failed plan by Jerry Brown’s dad from back when Bernie was a deadbeat.

Despite the socialist moniker, Bernie hasn’t pushed anything too radical for the lefty billionaire Pelosi donors who actually run the party. His movement isn’t trying to replicate Bernie. Instead it made him over in its image and is propping him up, Weekend at Bernie’s style, as the figurehead for a movement built on trendy lefty identity politics causes that its namesake has trouble keeping up to date on.

The same candidate who dismissed identity politics has come to be defined by them. His economic message is funneled through the usual victim groups and the medium has become the message. Bernie, an old white leftist, is the awkward public face of a movement that puts forward minority leftists for political office, even as its base remains as white as Bernie’s hair.

Bernie Inc. bets on the ethnic and racial nationalism of local constituencies with the big wins coming from harnessing the Latino and African-American votes that eluded Bernie during the primaries. That’s why Bernie is now for open borders, drug dealers, Hamas and gun control. Bernie’s old socialism has been streamlined to match the safe identity politics of the Democrat multicultural coalition.

The media’s sudden love affair with Cortez is also a warning that the Bernie Sanders brand is shaky. Even Revolution Messaging, the original wizards behind the curtain, only took him because they couldn’t find anyone better. And Bernie has been careful to remain surrounded by even less charismatic figures.

Bernie Inc. is a typical leftist organization, militantly loud, internally poisonous, virtue signaling its altruism while really being motivated by conventional greed, clumsily mismanaged and yet aspiring to absolute power. Its figurehead is angry and erratic. A fraud who has sold his soul for ego and cash.

Bernie will never have his revolution. He’s flip-flopped so many times that even he can’t keep track of his compromises and betrayals. And the one thing that everyone thinks is true about him is a lie.

He’s not authentic and doesn’t stick to his beliefs. Instead he traded them for a seat in the 1 percent.

Trump Haters: You Want the Truth? You Can't Handle the Truth!