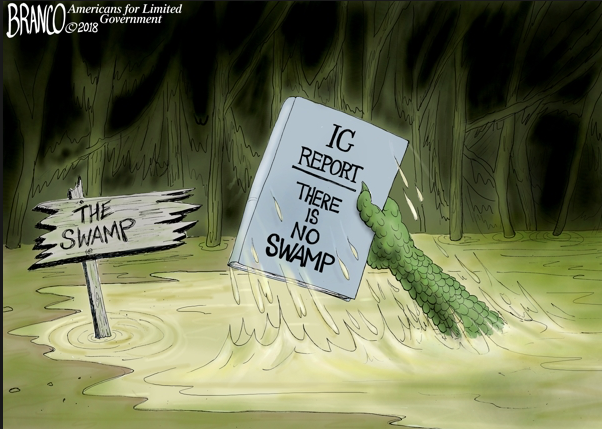 At the heart of the effort to bring down President Trump were two affairs. Unlike the bizarre lies about Moscow hotel rooms and prostitutes in the Steele dossier that was used by the Clinton campaign and its allies to smear President Trump and generate an investigation against him, these affairs truly took place.

And they didn’t just expose the malfeasance of four people, but of a corrupt political culture.

The affairs between Peter Strzok and Lisa Page in the FBI, and between Senate Intelligence Committee security director James Wolfe and New York Times reporter Ali Watkins, did more than betray the spouses of Strzok, Page and Wolfe. They also betrayed the duties of the two men and two women.

The affairs were not private matters. The two illicit sexual relationships were also illicit political arrangements. As the Inspector General’s report noted, Deputy FBI Director Andrew McCabe, a Clinton ally who has since been fired, used Page as his liaison with Strzok to circumvent the chain of command on the investigation. McCabe used Page as his conduit and Watkins’ media employers used the young reporter as a conduit to her older married lover and the leaked information he allegedly provided her.

BuzzFeed, Politico, the Huffington Post and the New York Times were aware of the Watkins affair. As the Times piece on Watkins coolly put it, “Their relationship played out in the insular world of Washington, where young, ambitious journalists compete for scoops while navigating relationships with powerful, often older, sources.” Usually it’s enemy governments that employ young women having an affair with older married government officials to extract information on Intelligence Committee proceedings.

But here some of the biggest names in the media were caught using the same tactics as the Russians.

How significant was the Ali Watkins and James Wolfe affair? Former New York Times editor Jill Abramson, in her furious defense of Watkins, noted, “most crucially, the value of her journalism (her Carter Page scoop in BuzzFeed actually helped lead to appt of Mueller).” Strzok was forced to leave the Mueller investigation due to the exposure of his texts with Lisa Page. Watkins’ affair with Wolfe has been credited by a key media figure with helping create the monster that is the Mueller investigation.

At the rotten heart of the campaign against Trump lay the betrayal of private and public fidelities.

But the Strzok-Page and Watkins-Wolfe affairs were also crucial in bypassing formal lines of communication. Illicit affairs are popular espionage tradecraft not just because they provide blackmail material against influential officials, but because their very informality makes it easy to create covert networks within organizations as personal intimacy is used to maintain political intimacy.

McCabe allegedly used Page to create such a connection between him and Strzok. The media appeared to have used Watkins to create a link into the Senate Intelligence Committee. It’s unknown if anyone on Wolfe’s end was aware of the affair and using it to feed information to the media. But it would not be too surprising if the open secret of the affair was just as open on his end as it was on the media’s end.

It’s easier to piggyback one illicit secret on another. There were two layers of secret affairs here, one layer of intimacy between two couples, and another layer of illicit intimacy between organizations. The organizational affairs cover three key players in the campaign against President Trump: elements in the FBI, the media and the Senate Intelligence Committee who had adulterated their responsibilities.

When we talk about the deep state, what we really mean are these illicit networks within the government that have their own rogue agenda. These networks exist in every part of the government. Some are just corrupt, trading favors, cash and access. Others are political. Like enemy spy cells, their members coordinate privately to suborn organizations the way that these men and women did.

Corruption requires complicity. As every good spy knows, the best sources are those who have proven that they are willing to compromise their ethics in other areas, whether it’s gambling, adultery or theft.

The network that went after Trump was, at least in part, built out of such people. In their varied cases, mistresses and spouses served as crucial conduits to a public official such as the DOJ’s Bruce Ohr whose wife Nellie worked to dig up dirt on Trump for Fusion GPS or McCabe whose wife Jill had received $675,000 for her political campaign through a close Clinton ally, Virginia Governor Terry McAuliffe.

Spouses could be used to route financial benefits while mistresses carried information, as Watkins did from Wolfe and Page did from Strzok. Formal political affiliations, such as James Comey’s supposed Republican status, matter less than the private ones of his wife and daughters who are rabid Clinton supporters and Trump opponents. In Washington D.C., formal party affiliation is downstream from social politics. The career networks that matter are built in restaurants and cocktail parties, not polling places.

Up close the swamp is making friends who can help you move from the public sector to the private sector. It’s peddling influence, getting to know people and building transactional relationships. It’s players who know everybody hiring out to other players who need to know everybody. It’s also knowing how to bypass ethics rules, oversight and chains of command to be able to get the things you need to do done. That might be a contract, a subsidy, a sale or the overthrow of the United States government.

It’s just another day in the swamp.

The Mueller investigation rose out of that swamp and the Clinton-Steele dossier dived deep into it. The investigation of the investigations has only begun mapping the swamp. Underneath the turgid waters of the Potomac, the swamp dwellers have their own mores. The stately government buildings, cozy restaurants and dignified manors conceal twisted relationships between people and organizations.

In every society, the governors live by a different set of rules than the governed. In Washington D.C., infidelity to spouses, oaths, governments, voters and ethics is not an aberration. It’s the rule. Adultery to whatever you claim to hold true is the price of admission. It’s how you can be trusted to join the club.

The political side of the imperial city is a small town. And everyone knows all the dirty secrets. Call it the deep state, the swamp or just what happens when government becomes its own culture.

Government runs on rules, on knowing them, enforcing them and breaking them. At the lowest level of power, you know the rules. At the next level you enforce them. At the final level, you break them.

That final level of power is the deep state. It lives where the rules are meant to be broken.

The campaign against Trump ran on the parallel laws of Washington D.C. Its networks were covert alliances that ran on the social relationships of the swamp. That these networks included infidelity and political prostitution as a feature would only be natural. In a transactional town that traffics in relationships, running a coup piggybacked on an affair and prostituting a reporter are virtues not sins.

The legitimate body of government tests for ethics. The parallel deep state tests for corruption. The men and women who went after President Trump didn’t just cheat on each other, they cheated on America.

As long as the deep state remains deep underwater, the corruption will continue.